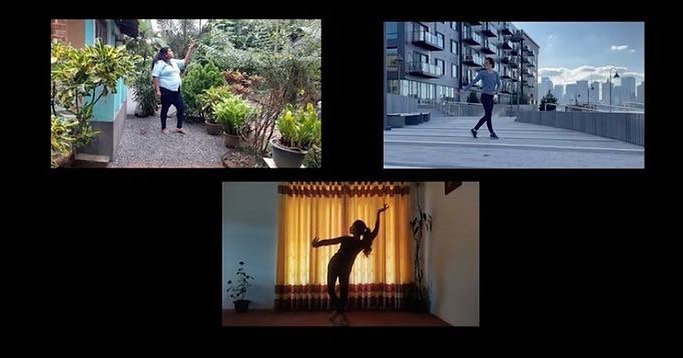 In more ways than one, dance can transcend. One of the most meaningful of those ways is through transcending barriers that too often divide us across the world — of language, of borders, of culture, of prejudice. At this time in the world, we’re all sharing a common challenge in COVID-19 but are also exploring new ways to connect creatively. Abilities Dance Boston and artists from the University of Peradeniya, led by Ashley Fargnoli (a Fulbright Scholar and dance artist based in Sri Lanka), took their own stab at creating a work to chipping away at such barriers and delving into such exploration through Beautiful Moments. These artists skillfully navigated creating a virtual concert over borders, one with unique and satisfying aesthetics as well as important meanings in its various works.

The first piece was co-choreographed by Lauren Sava, Kavindhaya Bandara, Dinuki Panditharane and Harshani Maduwanthi. It featured four dancers in four different Zoom screens. Two main aspects that really stood out to me were timing and movement quality. With the former, dancers moving the same vocabulary at different times felt like canon, but a less formalized version of it. That could have been from Zoom lag and the difficulty of coordinating timing over the platform, but there was also an improvisational quality to that which was very human and approachable. It all made me wonder, can we find grace and joy as we interact with one another through flawed digital mediums, as much as we can in these challenging times?

Regarding movement quality, there was contrast between a linear and a serpentine feeling in the movement vocabulary. Dancers reached up, standing to squarely face the camera with their feet hips distance apart. Their arms then moved into a circling quality, finding an embrace of the air around them and the energy of the performance that connected them. The juxtaposition of these dynamics, at seemingly opposites ends of a spectrum, was both visually and energetically satisfying.

Audio aspects of the piece also caught my attention. The score (by Dr. Leena Seneheweera, Tharaka Malanmapa and Rob Gross) had a joyful, yet pensive quality that supported the piece’s energy and aesthetics. Audio description played over it, which Abilities Dance always includes for accessibility. At times, it offered deeper thought about what was happening with the movement. For instance, it described dancers as “meditating” on their hands when moving them in a serpentine pattern and gazing at them — poetic indeed!

When the piece was completed, Sava (of Abilities Dance) discussed creating the piece and shared how they wanted to embody the concept of flow within it. It was interesting for me to think of how our energies move in and out of flow, often from more rigid and less flexible energies. Neither is wrong or right, perhaps just more and less enjoyable and effective at different times and in different contexts. This piece, like well-constructed dance can do, offered me an avenue to reflect upon such meaningful questions. Short of that, hearing about creative process can bring deeper thought about what’s in the piece and how you — as the viewer — received it as compared with the artists’ intent. There are no wrong answers; it’s a conversation, and that’s the special thing!

The following piece was co-choreographed by Lauren Compton, Nisansala Gunawardhana and Hiruni Rathnayaka.

Niroshi Senevirathne created the atmospheric score. The three dancers were in three separate Zoom screens, one indoors and two in outdoor locations (a cityscape and a more natural setting). The different energies and qualities of the spaces came together in an intriguing and memorable way. Moving from four Zoom screens to three was also notable, through the difference in visual and energetic dynamics that shift created.

Timing, as in the first piece, was another noteworthy aspect of the work; it began with unison movement and then shifted into one dancer moving as the others paused in a still pose. The different qualities of each section — unison and each of their solos, in their individual movement signatures — was also intriguing and memorable. The performers’ connection was evident, even as they were separated by miles upon miles and joining through the digital space.

Two pieces later came one co-choreographed by Peter Trojic, Prasangika Herath and Dhananjaya Dharmadasa, entitled “Grounded”. The dancers moved in and out of the camera frame laterally (side to side), one using a wheelchair and the other standing. They moved their arms in that lateral pattern, as well as in a circling motion — except for moments when they reached toward the camera, which was quite impactful when they did it together. The score, by Ayushani Nikeshala and Manuel Garcia-Boro, had a mysterious tenor and tone that enhanced the dynamics of the movement.

Also memorable was how the shot changed from one of the dancer’s Zoom screens to a split screen of all of them. Such creative and structural choices underscored the possibilities of creating dance over videoconferencing. We can remember that while also acknowledging that the limitations of that medium are quite real. The dancers completed the piece with reaching their arms up and then taking prayer hands at their heart — importantly, it felt like, in their own timing. This development underscored the spiritual potential of dance and movement and that we can, and should, find that in our ways.

A piece created from an Abilities Dance Boston community-based workshop encouraging civic engagement, Vote 4 Tomorrow, came a few pieces later. Young people danced in their own Zoom screen, to a classic instrumental score. As they moved, voiceover described why it’s important for them to do what they can civically to make a better tomorrow for their communities, nation and world. I felt here the legacy of the past and the promise of tomorrow meeting. It inspired hope and joy in me.

Before the last piece, there was a lovely ending video collage of Abilities dancers on stage, in community settings, in rehearsal and over Zoom. It spoke more than words ever could, simply by the possibilities and energies of all of the bodies dancing together and apart. The last piece featured Ellice Patterson, director of Abilities Dance Boston, and Fargnoli. Erin Rogers composed the score. They began in an “x” on the floor, then rested on one side. They slowly rose to stand from there.

There was a heavy weight in the air with these movements, but still they rose to stand. They moved with a contemplative quality, taking their time. It all felt filled with purpose and intention. They danced in unison at times, and at other times in canon — adding dynamic shifts. There was also a feeling of understatement and acceptance. They moved in a way that felt and is good for the body, accentuating the truth that doing so is more than enough.

That we can dance together, no matter where we are in the world — in the most meaningful cases, thereby transcending barriers of language, borders and preconceived notions — is another important reminder. This time has brought us much suffering and hardship, for people across the world, but it’s also underscored our common destiny and all else connecting us. Engaging creatively through the body can only deepen and sustain such understandings. Thank you to all artists in Beautiful Moments for highlighting these essential truths, in such an engaging and pleasing way. Beautiful moments indeed!