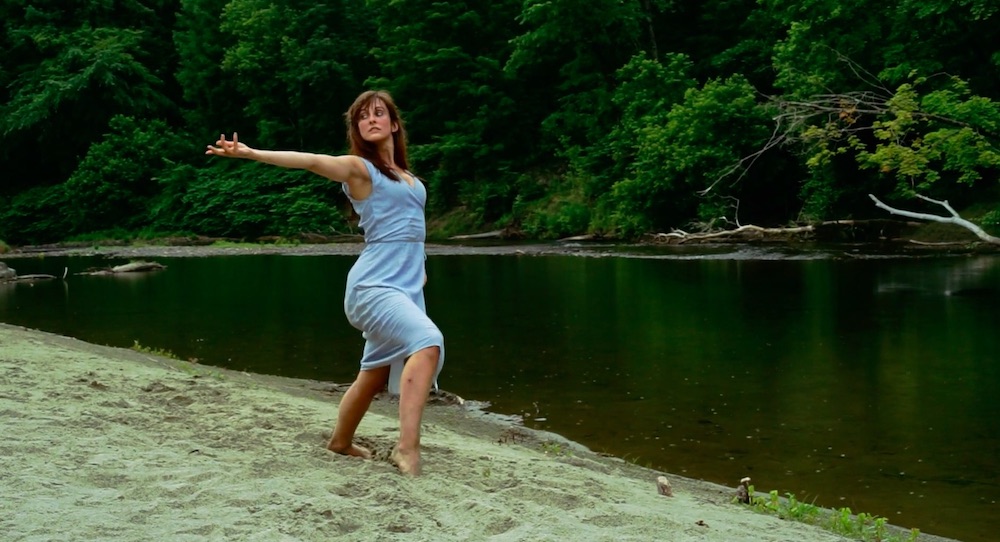 Humans have danced to honor those who’ve left us, from ancestors to loved ones, from our very beginnings. The Shawna Shea Memorial Foundation commemorates Shawna Shea through the annual Shawna Shea Film Festival “Shorts Fest”. Shea was passionate about the arts and film, and left this earth tragically young. Her family made a foundation in her honor, to nurture young women with shining potential in film and the arts. Suzannah Dessau and Erin McNulty’s Floodstream ended this year’s virtual festival, capping it off with a thoughtfully created and masterfully executed dance film. Filming and cinematography was by Christopher DiNunzio.

To begin the film, a woman (McNulty) stands in a flowing stream, her back to the audience. She wears a beautiful light blue dress. There’s a quiet and ease in the air, but somehow — perhaps through the score and McNulty’s physical presence — it also feels like a calm before a storm (original score by Josh Knowles and sound engineering by Alex Glover). We see another dancer in the dark, wearing the same color blue but with a simple t-shirt rather than an elegantly cut dress. Hands come in front of her face, blocking her vision and silencing her. Both dancers roll through their spines and fall to the ground. Their settings are incredibly different — one a vast, ope and beautiful space, the other dark and devoid of anything but concrete and a drain. Yet, their movement and their presence feels strikingly similar, in tone and emotional quality. It makes me think of perception coloring our inner experience, no matter what outer conditions may be.

McNulty dances — lunging deep, opening arms with elbows bent and fingers to the sky, turning low and looking high. Her focus and intention are palpable. There is clear strength, her body and soul firm in her conviction. In a memorable image, she lies at the edge of the stream, her back becoming wet. We cut to Dessau, in that place of dark concrete, face down on the ground just as she was when we left her. As she had before, she steps her feet wide, hips dropping low. She raises, turns and reshifts her focus. Dessau places a hand over her face, jerks her own elbow, and grabs at her own chest before again turning and falling to the ground.

She exhibits clear emotional turmoil with this movement and her overall presence, a desire to constrain herself or perhaps competing emotional forces within her. Whatever it is, it’s clearly turmoil. Even as she falls, she rises, propping herself on her elbows. She gazes around the space, and something in her presence signals a change of perspective. As she rises higher, it seems that she’s found a new strength — maybe it’s hope. We see McNulty again, standing by the water, back still wet, gently rolling through her spine and shifting her weight to face upstream. Back to Dessau, we see her lunging low — yet with a newly-found stability and grounding in her own two feet. With striking control, she rises to backbend as her back foot bends toward the back of her head. She lengthens that leg forward, kicking it out in front of her with a flexed foot. She has risen and is not about to fall again, it feels like.

Back to McNulty again, she ripples through her spine and gestures with her hands as if finding pure pleasure in the freedom of her movement. Back and forth between the two dancers more quickly we go after that, both of carving through space in their own ways. A continued reach and pull seems to convey a continuity, a struggle and a delicate balance that continues. Darkness must be continually fought off; the battle continues. Gestures such as McNulty blocking her face with her hands and Dessau bracing her chest with her arms seem to signify that struggle and accompanying self-protection. The score, Knowles’ experimental mixing techniques with his violin, builds a sense of sadness. There’s also somehow hope — a sense that supports the dancers’ movement and presence. All together, it’s a captivating presentation, creating both food for thought and aesthetic wonder.

Before credits roll, we see McNulty underwater, the camera filming her from below (underwater cinematography by Chris Johnson). The camera then cues in on Dessau isolating joints in her upper body. A literal floodstream and a floodstream of thoughts and emotions — the two women seem to have experienced them both in different ways. Freedom of the mind and freedom in space seems to also be part of that food for thought that the work offers, one that’s particularly relevant in an age of social distancing. Gifts for the mind and gifts for the senses, relevant to the context in which it’s created and seen — art can be all of it. It can commemorate those we’ve lost and offer others among us a chance to shine that they might not otherwise have had. Art and the experience of it can be a floodstream of its own.