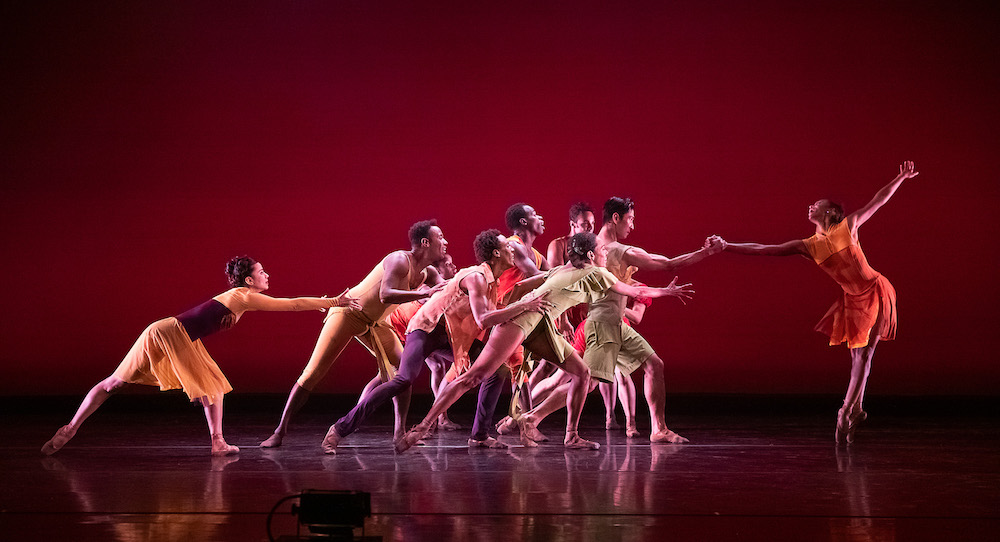 As a dance reviewer, seeing dance live is one of the most treasured parts of my life. There’s just something about the house lights going down and becoming absorbed in a work of dance art — hearing the dancers’ breath and feeling their physical energy right into your own bones. Just as dancers have been stripped of the ability to move together in space, dance audiences have been stripped of being able to experience this unique magic. There’s no replacement for being there in person, but Jacob’s Pillow offered something special by taking their annual Summer Festival to YouTube — in some kind of way, we were brought back to the stage, to those darkened rooms where we experience that incomparable ephemeral magic.

The festival also offered discourse and historical context that can meaningfully add to a conversation that’s currently elevated in our culture — on power, privilege and oppression — such as acknowledging the Indigenuous peoples whose lands we dance on when we dance at Jacob’s Pillow, having scholars share the cultural meaning of the works at hand prior to the performances, and post-show discussions with the artists. In these two main ways, giving viewers an experience of the stage once again and offering space for open dialogue in this amplified cultural moment, Jacob’s Pillow 2020 Virtual Summer Festival truly met the moment.

Dance Theatre of Harlem’s performance (streamed on YouTube on August 6, and originally taking the Jacob’s Pillow stage in July of 2019) opened with a welcome and context about the performance and the company. Jacob’s Pillow Scholar-in-Residence Theresa Ruth Howard explained how Arthur Mitchell was revolutionary and influential in the field, such as with establishing a precedent of mixed bills that could attract viewers of color and bring diversity to the field. A ballet world looking to be more inclusive and socially conscious in a rapidly changing world, without losing the essence of the art form, should follow Dance Theatre of Harlem’s lead, she advises. Jacob’s Pillow Director Pamela Tatge speaks next, acknowledging the Indigenuous land on which they dance — on that of the Mahicans, the Nipmucs, the Pocomtuc, the Mohawks, the Montauk and the Pequot. Tatge also describes the deep connection of Dance Theatre of Harlem and Jacob’s Pillow, the site being where the company first performed in 1969.

When the performance officially begins, Darrell Grand Moultrie’s Harlem on My Mind immediately establishes its own wonderful atmosphere and style — with the precision of a classical ballet corps and the suave, cool, and groove that’s central to Black art. Big band jazz accompanies the dancers through extensions for days, rock-solid turns, and splashes of personality such as little waves to the audience. Unison shifts into two intersecting lines and each dancer moving in their own improvisation. It’s a community of passionate individuals who are nevertheless connected to each other in space and in energy.

The lighting darkens (lighting design by Jason Banks) and we move into a solo from Christopher Charles McDaniel — full of strength, personality and bravado, but also sometimes vulnerability; at the end, he plops down and shakes off as if fully exhausted. Following that, a duet from Alicia Mae Holloway and Derek Brockington adds charm and humor, movement remaining classical in essence but imbued with a downward release and inflections of personality. Ingrid Silva follows that with a memorable solo to My Funny Valentine from a solo trumpet. Her movement and performance quality translates a deep introspectiveness, in ways that words never could.

Energy rises with an ending ensemble section, the music imbued with sultriness and possibility. A memorably innovative cha-cha variation on pointe and a more grounded one from the ballerinos, followed by Latin flair from a trio and then the ensemble, pays homage to Latin culture that’s also a central part of Harlem’s culture and history.

After a burst of energy, the dancers disperse to offstage. Part of me wants that burst of energy to last longer, to revel in its vibrations. Yet however long, I couldn’t help but smile and feel its carefree suave shaped by formalism right down to my bones. Thinking later, what’s also powerful about this work is how it portrays Harlem as a place of energy and joy, in stark contrast to social and media narratives of it as a place of crime and danger. Yes, poverty and generational trauma remain realities in this place — yet so do creativity, love and resilience.

On the following Thursday night of the virtual festival, Seoul-based Bereishit Dance Company takes the YouTube stage (the streamed performance originally on the Jacob’s Pillow Stage in June of 2016). An address from Jacob’s Pillow Scholar-in-Residence Maura Keefe and another from Tatge again proceed the streamed performance. Keefe shares descriptions of imagery in the piece to come, which is intriguing and no doubt helpful for some viewers who could use the access point for understanding. On the other hand, I wonder if it serves audience members and the presenting artists better to have audience members discover their own interpretations. No doubt, there’s a tricky balance at play there.

The first work in the company’s program in Balance and Imbalance, choreographed by Founding Director Soon-ho Park. The atmosphere in this work is immediately Spartan, and the style quirky in a curious and intriguing way. White lighting fills a white stage, empty but for one dancer and their prop. A soloist, wearing only white pants, manipulates a bow and arrow and an attached string in ways I don’t think I ever would have thought to do so — bending and folding like a contortionist at certain points to execute these possibilities. A duet partner joins and dynamics of power, control, and forced submission become evident. Adding to the Spartan feel of it, a traditional Korean string instrument plays — intensifying the drama of power and submission at hand.

Later comes a more cooperative and harmonious feeling in the air as a third dancer joins, with two dancers supported on the back of a third. The supported becomes the supporter, and vice-versa. Later, the two dancers come together and a part, a circular quality in the movement throughout. One always holding a bow and arrow, sometimes both of them, the prop comes to feel like a symbol of domination and submission. Additional instruments and a resulting bigger sound support these dynamics.

Music speeds up and the partnering — striking, inventive, and memorable throughout — comes back to a more aggressive feeling. At the same time, a feeling of acceptance and harmony in the balance between the dominated and the dominator seems to be at hand. A memorable image comes with one of the dancers in a position of being ready to shoot an arrow from the bow, backlit so partly in silhouette. From there, lights go down to signal that the program has finished.

As the dancers and musicians (I was heartened to see) bow, I liken experiencing the performance — in a way — to seeing Blue Man Group; words can’t quite describe it, if someone were to ask you what it’s like or what it is. Some art needs to be experienced to be fully understood. In a world of categorization and linguistic cacophony, that’s something special in and of itself. At a time when a global pandemic separates us from the ephemeral, wordless wisdom that dance art can offer, and a deep cultural reckoning calls for it more than ever, Jacob’s Pillow has provided something that truly met this heightened cultural moment.