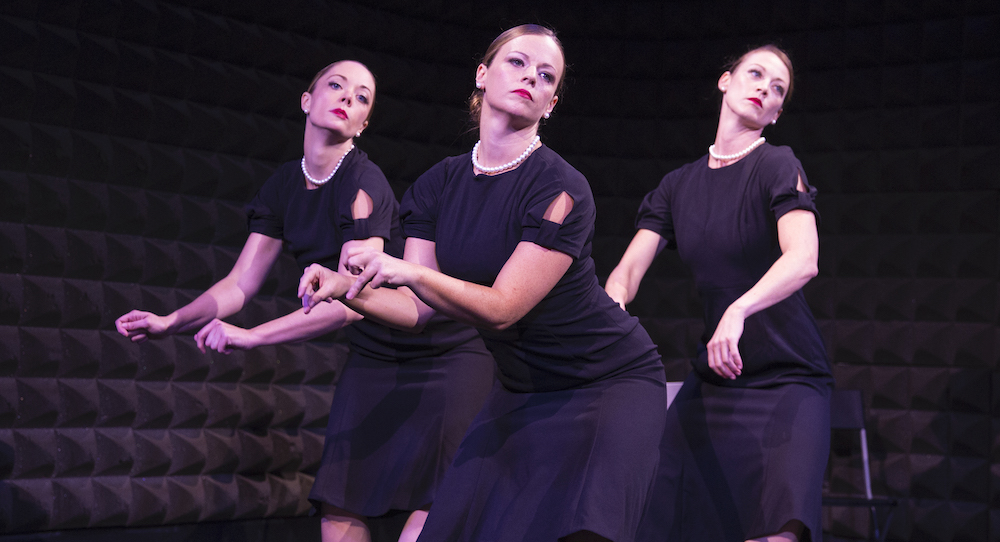 Dance art with authentic humor and heart truly stays with me — I feel it, live in it, remember it. It reminds me how with all of our separate identities and (perceived?) divisions, we’re all human. DANCE NOW’s Dance-mopolitan’s Encore Series, through a talented host and heart-filled performances, offered this kind of dance art. Joe’s Pub provided a welcoming atmosphere where audience members could eat and drink while watching the show. A light and joyful atmosphere filled the space. DANCE NOW “create(s) inclusive, destination events that bustle with innovation and the boundless imaginations of a community of multi-generational dance artists.”

The first piece, “SoLo” (2019), set the tone for the theatrical quality, heart, and humor of many of the pieces to come. Mark Gindrick, in a fedora, blue sport jacket and jeans said “song one” into a microphone. He lip-synced one line and then on the word “fall”, dropped to the ground, lights out. This choice established the slapstick style of the work. The audience chuckled at this unexpected turn of events. Yet, a few seconds later, he was back standing, lights back on him.

He began lip-syncing a dramatic ballad about unrequited love — head thrown back with a wide stance, drawing the microphone back with him rockstar-style. His presence was dramatically humorous, and the lighting low to match the ambience. More “dancey” sections had him moving in jazz-inspired movement vocabulary, humorous touches such as slapping one hand to the back of the other while in passé conveying marking a turn.

The song referenced this woman, the object of his affection, as “the wind”. A man in a headset, presumably theatrical “tech” staff, made a wind effect happen by ruffling the singer’s clothes. The audience chuckled at this effect. It was part comedic self-deprecation, making humour out of embracing “low-budget” creative approaches, and part “meta”-commentary, giving a window into processes behind bringing dance art to life.

The anti would be upped; the “tech” guy got a leaf blower and blew it at the singer, who even took the air in his mouth to blow up his cheeks. The crowd ate it up, laughter ringing through the theater. To end, the technician blew the singer offstage and took center stage. He seemed to enjoy the crowd’s attention before bowing and heading off. The audience cheered this man on, someone who we wouldn’t expect to be in the spotlight now soaking it in. The piece also cleverly, joyfully opened up the conception of what “dance” is, and can be.

The host, Trudee, danced in next. She moved vivaciously to pop tunes, dancing with technical command but also a casual social dance flavor. From step-touches to battements to signaling a mark of a turn (with one hand hitting the back of the other while in passe, bringing back that “meta” touch from the first piece), she committed to all it with joy and full energy.

Her dress was sparkly pink and white, with a tiny pink shrug. A “fauxhawk” and sparkly jewelry finished off her “look”. She began to speak in a Long Island, New Jersey-type accent, high-pitched and naseled. The character was clear, almost archetypal. She spoke of loving all of the performers, all wonderful people excellent at what they do. The audience chuckled, the kind of chuckles that come from the heart.

Then came a soulful, memorable duet — “a portrait of them”, performed by Ryan Rouland-Smith and Nicole Vaughan-Diaz and choreographed by Vaughan-Diaz. Vaughan-Diaz stood behind Rouland-Smith, who was sitting in a chair. They executed gestures speaking to drawing closer to and farther apart from each other — a hand to a shoulder, a placing of that hand farther away. They moved through these gestures faster and larger until they were up off their chairs and moving through space. Their presence reinforced the feeling of high drama and emotional uncertainty that can come with troubling times in relationships.

Their simple clothing in earth tones and straightforward, yet dramatic piano score complemented that atmosphere well. They moved into further planes and levels in space, dancing toward and away from that chair. Movement expanded upon that original moment of hand to shoulder. Angles of limbs became supports for lifts — an upper arm becoming a shelf, a bent elbow acting to secure. In one memorable movement phrase, a backbend moved into a supported fall into another lift. The movement, and the performance of it, was daring and committed. Conflict between love and animus resonated through it all. The work left me in a thoughtful, yet also emotionally struck, space.

Trudee returned a couple of times and told us about different performer’s “microgenres”. One coming performer’s was “limbgevity”, she explained, in “Duet”. Gus Solomons, Jr., using a walker, interacted with a puppet. He started facing back, and the puppet showed his head. He turned around and moved his puppet in heartwarming relational ways: the puppet “walking” up his arm, hugging his neck,  seeming to play hide-and-seek. In the program notes, he offered gratitude to “DANCE NOW for allowing me to retain the title of choreographer”. The work was a touching depiction of possibility for excellence in dance and movement within all people.

Cleo Mack’s “Arrangement” — an inventive work conceptually, aesthetically, and conceptually — closed out the program. Blair Ritchie, Kelli McGovern, and Mandi Stallings of Rock Dance Collective danced it. The work poked holes in many contemporary dance artist’s assertion that using a score with lyrics is a risky — perhaps even unadvisable — choice; the classic song “Is that all there is?” guided meaning and atmosphere. The work was compelling, among other things, because of the dancers’ attitude of ennui and discontent — which fit the song. Also in alignment here, they wore black dresses with pearls, stud earrings, and low, modest heels — and somewhat blank expressions.

They started at chairs, and those chairs were a grounding base to which they kept returning — that grounding in ennui. Also catching my eye was effective use of a base movement phrase slightly manipulated and repeated through the work — arms fanned to form an  angle, one falling while the other caught her and the other turned. This choice reinforced that sense of ennui through a cyclical nature, a feeling of coming back to that same old thing and maybe nothing ever really changing.

Something about it all — perhaps the lyrics combined with atmosphere and the dancers’ dramatization — made me giggle. I felt it all deeply at the same time, however, that feeling of stasis and that there has to be something more out of life somehow. Humor, heart, some great movement — and oh yes, pink sequins — it all came together to make DANCE NOW’s Dance-mopolitan’s ‘Encore’ Series an accessible, enjoyable afternoon of dance art. It was the kind of dance art that welcomes everyone, and who doesn’t want to feel welcomed? As the dance world leaps forward, that’s not something to be forgotten or cast aside. Trudee put it well — encouraging individuality and self-acceptance, she reminded us to never “forget your micro-genres.” We all need that reminder sometimes.