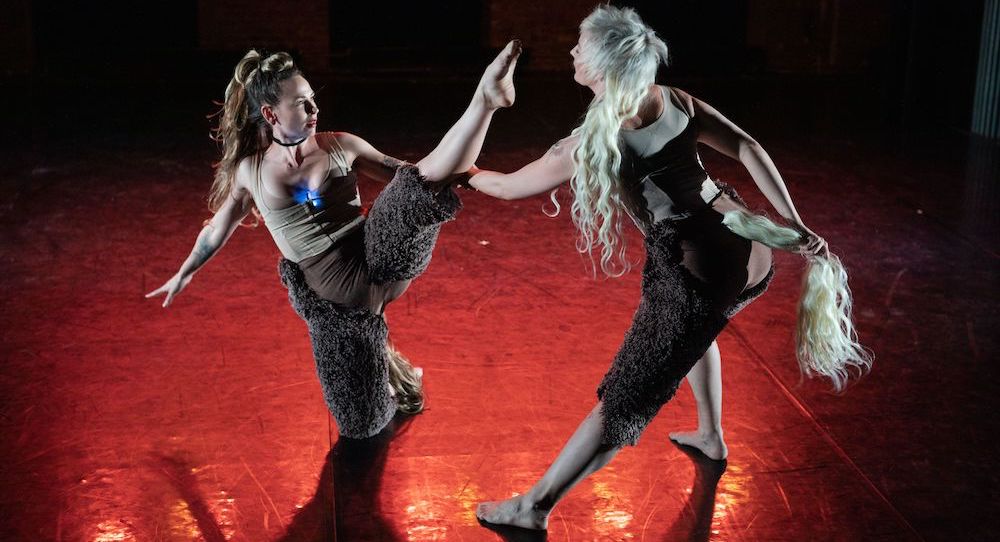 Dance Informa sat down to see the Women in Motion commissions of 2020 at Gibney, the culmination of a one-year process of three female identifying dancemakers. Rebecca Stenn, asubtout and Same as Sister each presented works, and provided an evening of eclectic and entertaining art.

In The Oak and The Willow, in a soundscape of ocean waves, creator/dancer Rebecca Stenn and dancer Quinn Dixon are entangled in fabric, arms wrapped in orange and adjoining the two of them. A pile of clothes, leaves and other debris centers the stage. The two both fight and cooperate to accommodate their attachment point, seeming sometimes distressed, sometimes calm. Even once untangled and separated, the two always move in relation to each other. Without forced synchronicity or partnering, they simply exist in each other’s space, often side by side. Slow, deliberate movements evoke a sense of being underwater, or maybe that’s only the power of suggestion from the sound of waves. The movements could just as easily, and maybe more likely, be those of trees swaying in the wind. In what seems to be a second act, the dancers don coats. The soothing sounds of Jay Weissman’s electric bass replace the waves, and the performers’ waving arms and undulating torsos are reminiscent of jellyfish, or a willow’s draping branches, or any number of other natural organisms that feel their way through space rather than see it. Like the music, they are in a trance, which is broken only as they reach the pile of debris center stage. They rummage frantically through the clothing, dispersing the pile, and Dixon once again has a hold of the long piece of orange fabric that had connected the two of them. The sound it makes as he whips it repeatedly through the air as the lights black out is like a ribbon whipping in the wind.

Next up was The Centaur Show by asubtout (Katy Pyle and Eleanor Hullihan). Described as a “nouveau New Age fantasy death metal poperetta about two centaurs on an interstellar voyage to save their (non) binary star system from imminent supernova,” The Centaur Show is a reminder that dance and art can be performative and fun. Any potential pretension is dropped, and you’re left with a really good time. A dark stage is first illuminated by two glowing, moving spots of light, then accompanied by the of whooshing tubes, and then stage lights reveal two – well – space centaurs, complete with tails, mane, furry thigh warmers and space crystals embedded in their nude corsets. If you were unsure what to make of that, the centaurs then begin prancing and neighing to electropunk music. At this point, you’re on board. It’s a fair trade of a little bewilderment for a lot of fun. You’re taken through the epic of these centaurs’ tale, from a screamo-ed monologue of their superhero backstory, to a whispered slam- poetry reading of their hunt for space crystals (set to piano). Their vigorous and energetic dancing, sometimes technical and precise, sometimes wild head banging, is more a vehicle for the show. Think death metal Sailor Moon. asubtout masters the art of getting their audience to laugh (which is extremely difficult in an art form that takes itself as seriously as dance often does) by taking everything past its extreme and into the ridiculous, leaving no room for questioning the intention of the creators. And at the same time, no one but two extremely talented and technically trained dancers like Pyle and Hullihan could pull such a thing off. Under the costumes and story and gags, the movement itself is based on sharp, well executed Cunningham-esque technique. The seriousness with which they approach such a wild concept is what sells it. They’re not horsing around.

KALLAX, a work-in-progress by Same as Sister, has elements of story, assembled together through scenes. Same as Sister (creator/performer Kristina Hay, joined by performers Leigh Atwell, Hilary Brown-Istrefi, Briana Brown Tipley and Jamie Robinson) takes us through themes of consumerism and ascent to American celebrity. Set in a digital backdrop of an IKEA store to what sounds like a Swedish How-To tutorial, a woman stands on top of a styrofoam iceberg, making performatively sexual faces and movements. A man stands on the ground away from her, also posing performatively in his underwear. In another scene, a new woman in a black catsuit, sparkling heels, and red lipstick with a piercing stare poses and touches herself suggestively. What would otherwise be conceived as sexy, her stare makes disconcerting. She never breaks eye contact as she routinely goes through a series of provocative poses, even when those poses are upside down. Two twins with what appears to be white masks with holes cut out for the eyes enter the stage and increase the level of uneasiness. As they approach, you see that the masks are actually of the catsuit woman’s face. They wear track suits and mittens, and you are uncomfortable with this combination. Your discomfort grows as they remove their jackets to reveal Christmas sweaters. Scenes go on as these five characters lead the catsuit woman through space and story, with much step-touching, hair flipping, twerking, and mittened groping set to Swedish music – including a home-recorded rendition of “Let it Go”. More performance than dance piece, the goosebumps you get are similar to when you watch a suspenseful horror movie. When projected phone footage of an IKEA store evacuation brings in the black-out, you’re unsure as to what conclusions to draw about celebrity, and consumerism even less, but you’re sure they’re not good.

Gibney’s Performance Opportunity Project (POP) is an initiative that provides non-profit artists and companies space, support and subsidized rates for performances. Women in Motion is produced by THE BANG GROUP, and made possible through partnership with POP. Women in Motion celebrated its 19th year of fostering women dance artists this February. Performances, showings, and salons are held throughout the year, and next one can be caught on March 1.