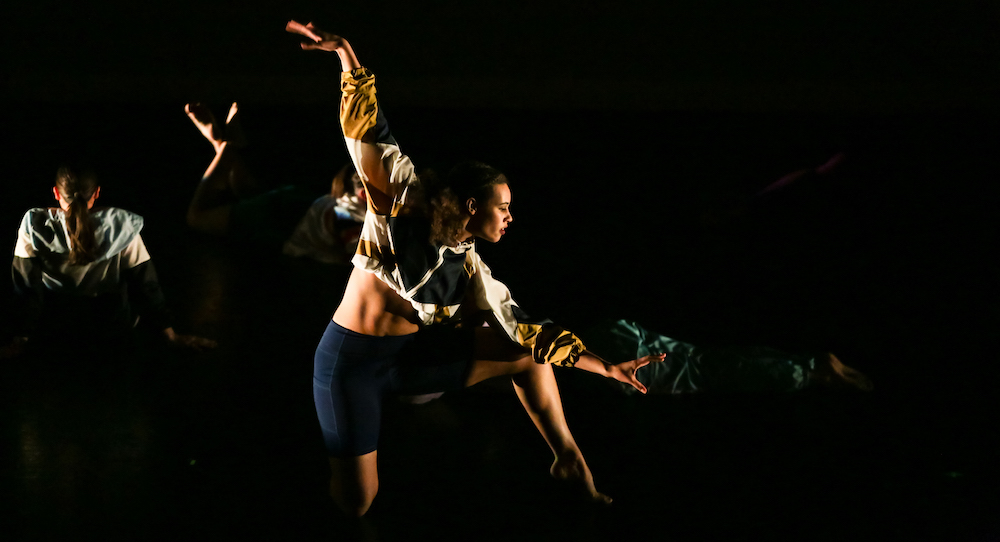 Dance can hit us viscerally — right down to the bone. The reason why it can is the same reason for empathy and any level of human connection — mirror neurons. Yes, there’s a scientific explanation behind it all. We see someone else in pain, we feel it too because we’ve experienced something like it. We see someone move with soulfulness and commitment, we come to feel those feelings in ourselves. Powerfully, adeptly, in YELLOW, AlmaNYC portrayed themes of beings living together in systems and the importance of such communal structures for the well-being of all involved — in, arguably, the perfect medium for doing so: dance. Choreography came from Zanza Steinberg, with Julia Kane as associate choreographer.

This sense of community and connection was evident from the show’s very start; a pre-show backdrop read “YOU ARE WELCOME”. A pre-show announcement included the customary note to please turn off all electronic devices but also that no one would be asked to leave — because in “a spirit of inclusion…we believe that everyone experiences art differently, and that art is for everyone.” A solo that became a duet began the work’s movement.

Then more dancers ran in — adventurous, vivacious and seemingly unafraid. After moving together for a bit — through different levels, planes in space and qualities — still more dancers joined them, running in just as they had. Here, we saw movement source material that would come again in the work, bringing a grounding element of understanding and relatability. They all moved with expansiveness and attunement to each other. There was joyful energy in the air, yet the score (music by Cosmo Sheldrake) interjected mystery, tension and even a touch of foreboding.

Movement at various speeds and qualities, such as a section of controlled thrashing-like movement into movement much slower and softer, reinforced the feeling in the air of the unexpected. The ensemble shifted into a big circle, and from there into smaller circles in smaller groups. It was all harmoniously working in a system, even if at times with that air of tension. A nuanced, committed solo from Nicole Davis shifted the focus to the experience of one individual within that system. A following trio (danced by Davis, Davonna Batt and Kaitlin Niewoehnwer) — thoughtfully-organized and harmonious — expanded this more narrowed experience a bit, offering a window into another social system through movement.

The dancers wore everyday clothing, yet in colors and cuts that brought an artistic touch. Lighting in ambers and yellows, shadows and brighter areas felt similar — evidently shaped and molded but not to the goal of calling attention to itself (production management by Timothy Meadows). It all, including that co-existence of harmony and tension, felt natural and purposeful at the same time. Chirping of birds brought my mind further into ecosystems and the natural world.

Another technical effect would add further layers — a touching animation of a young man and a young woman (by Mary Sorich). Their chatter moved into the discussion of the Earth’s color from space — yellow, rather than the blue/green of our mind’s eye (thus, the name of the show). I wondered, was this a time in the future when humans had so poisoned the natural world that it lost its blue and green — and our species somehow adapted to the resulting harmful effects on us?

Before answers to such questions were at hand, the dancers were back to the stage. On both individual body and larger stage picture levels, they moved with a sense of clear expansion and contraction — reminiscent of the breath cycle, inhale/exhale. A later solo added some true humor and heart to these deep and layered sections. A dancer (Davonna Batt) moved with a bowler hat — almost dropping it and sliding it on to her head, smiling big in being pleased with her look, dancing with the new pride and energy that it seemed to bring.

The audience was receptive to her theatricality, laughing and joining in her joy. As she moved more expansively and continuously, classic jazz vocabulary had the groove of hip-hop movement and the release of contemporary dance. It didn’t quite matter what the “style” was — it was just joyful, skillful movement. This section added heart and humor where there was much mystery and even at times ominousness, bringing a balance of mood.

Another animation continued the heart and humor here. Following their disheartening discussion of environmental destruction, the young man and young woman spoke more casually. The young man asked the young woman if she wanted to dance. Yes, she did! The cartoon people gently waltzed — no big gowns, no glitz or glam, just them together. This turn of events was a touching reminder that no matter what happens to our Earth, in our communities or in our politics, love and kindness are part of being human and can endure.

In a further intriguing — and ultimately humorous — twist, the cartoon young woman jumped away and a real woman, one of the dancers, waltzed with the cartoon young man. The audience chuckled as the real woman and the cartoon young man found their footing and rhythm. One could probe. this unique creative choice to find deep philosophical questions, on art and more — yet short of that, something about it was simply funny and heartwarming.

The ending, coming not too long after that, reinforced the heart and sense of connection here; dancers moved in a circle, and then one by one they moved offstage — until one dancer remained. More slowly, she made her way offstage as well. This sequence reinforced the way even in individual experience, we come from that which is shared. I didn’t consciously think that at the time, but I felt it — felt it down to my bones. Just as did the work as a whole, this ending underscored how we move together, even if we experience it as moving alone. Dance can speak volumes without words like that.