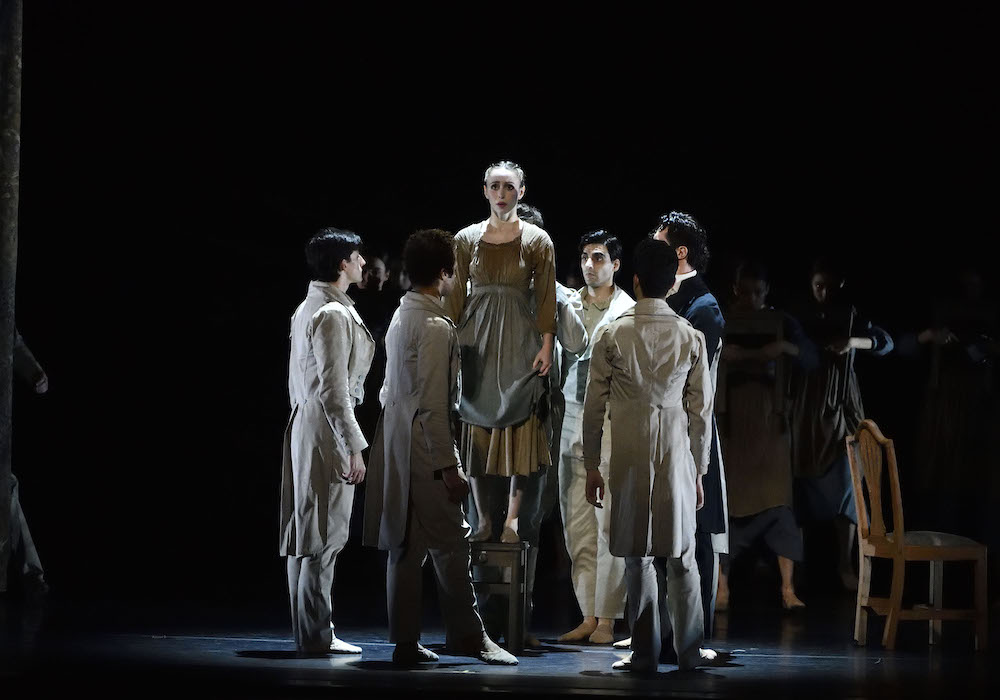 Narrative dance art holds a central challenge — how do you tell a complex story, with a multifaceted plot and nuanced characters, without words? How can movement and design elements (lighting, costumes, music, set) alone tell the tale? The challenge grows when the source story is a classic, widely-beloved novel such as Jane Eyre. American Ballet Theatre (ABT) rose to the challenge with its recent staging of Charlotte Bronte’s tale, choreographed and directed by Cathy Marston. Jenny Tattersall and Daniel de Andrade staged the work for ABT.

Also notable in Marston’s dance retelling set on ABT is a rising to modern sensibilities. First, the movement had a contemporary quality while still grounded in classical technique. Second, Bronte’s feminist underpinnings shone through in how Jane was built as a strong, autonomous woman in her own right, despite the efforts of men to silence and overpower her.

Third, the now-iconic Misty Copeland as Jane sent a strong, clear message that race doesn’t have to matter in portrayals of classic characters. Sure, Bronte was writing in Victorian England and set the story in that context — and probably imagined Jane as classically British (read: white). Yet, nowadays, we can see Jane as any woman, of any race. Copeland danced the role with a complex, compelling emotional life — and stunning lines for days, to boot. It could be difficult to focus away from the somehow delicate strength of her beautifully arched feet. 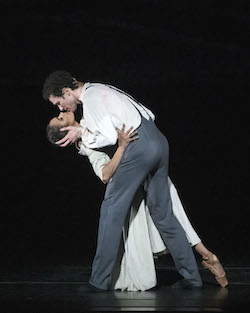 The work began with figures moving behind a scrim, creating a dream-like effect (set design by Patrick Kinmonth). I remembered how the novel is from the perspective of Jane looking back at her past. This struck me as a cogent, aesthetically beautiful way of conveying the idea of memory. The program explained how “Jane is running, her journey hindered by imaginary male figures” — a first glimpse at the feminist colors with which Marston painted her dance retelling of the classic novel. This effective, visually satisfying design would also be a consistent aspect of the work. The atmosphere could be dark and dreary, but it fit the novel and its Dickensanian tone — and was still somehow, to me, beautiful.

The scrim rose and a group of plainly dressed dancers moved and in and out of unison. The movement, as it would throughout the work, had contemporary qualities — weightedness, articulation and initiation directly from joints, and arch/contraction through the spine — yet a classical foundation and essence. In unison, a corps of dancers raised one up overhead and to the right, in the classical rounded port de bras shape. They then bent deep through the knees, leading into a turn higher in space.

Soon Copeland danced a solo, traveling back and forth across the stage — Jane seeming to be torn between different objectives. Her passion and pathos were clear, and so very enticing. An official-looking man (in suitcoat) came and grabbed her, exerting control. With her being pulled offstage, the set changed — but maintained its bleak feel and darker earth-tone aesthetic. The program synopsis explains how this shift was to a boarding school, where Jane’s aunt and caregiver (Mrs. Reed) sent her from a perception of Jane being “unruly” and “defiant”.

Even in an atmosphere of rigid control, the children in the school could find moments for play — shown in a section of them playing “leap-frog”, for example. This was one instance, among others in the work, that lent itself to realism being played out in movement. At points this spirit of play brought a feeling of organized chaos, children running around frenetically. The choreography cleverly and convincingly depicted these moments. At other points, however, the lack of personal autonomy and routinization of their lives was clear; in a memorable and pleasing structure, they moved from chairs set in a circle. In unison, their spines rose and fell and their arms moved in straight lines, in patterns.

Then Copeland danced alone again. Her arms swung in circles, lightning speed, followed by a slow and controlled développé. In such movement phrases, she demonstrated a fluency and mastery of both contemporary and classical movement vocabularies, and the ability to both move quickly and sustain movement. Later came a section with raucous boys, offering a chance for danseur/danseur partnering. This was another way that Marston brought the classic, Victorian source text into a modern sensibility, through this defiance of classical ballet gender norms.

Soon we had jumped forward into Jane’s adulthood, the program synopsis told us, but which was also cued by scenic and costume changes. Also memorable in this section was a pas de deux with partnering that was similarly inventive, here in its vocabulary. Copeland turned one full rotation around on one pointe shoe, the other leg back in arabesque, for example. Her body was angled forward 45 degrees. The easy grace here, combined with the raw physics of it all, fascinated me.

Soon enough, before intermission, the plot thickened. Sparks of love had begun to ignite between Jane (recently hired as a governess) and her employer, Edward Rochester. His hidden wife, Bertha (with severe mental illness, and of whom she did not know), set their room on fire. Smoke, fiery lighting and a quite oversized bed (in an abstracted contemporary style) conveyed this happening. Jane rescued her employer, and they shared a passionate but tense pas de deux — the truth revealed and them both reckoning with its hiding. The curtain fell.

In the second act, Jane almost came to marry Mr. Rochester. They danced together again. A skating motion, sliding forwards en pointe to then made me think of the two were moving forward into the future together — or so we might think. Bertha entered the scene and caused quite a stir. Mr. Rochester held her back as she lunged for Jane. The action here was well-organized, and the dancers truly committed to it.

Even with Bertha restrained and carried away, Jane knew that she and Mr. Rochester couldn’t be married. Another tense pas de deux offered further inventive partnering, such as her backbended over his chest and turning through space on that support. The movement was visually stellar as well as fascinating on a pure physics level. The passion and the physicality — the contemporary bent to the movement brought both. To end, after further sections that challenged the couple’s young love (including Jane running away into the forest and then being found), Jane looked to him, then walked forward.

Lights lowered to only a spotlight on her. She stood tall and proud in her own power and autonomy. This felt like the perfect ending to a classic tale, one ahead of its time in its own right. Through all of the twists and turns — literal and metaphorical — Jane would remain her own strong woman. Marston’s choreographic work, along with ABT’s stellar performers and its superb design team, brought this central idea into something compelling to a modern sensibility. That feels like quite a gift.