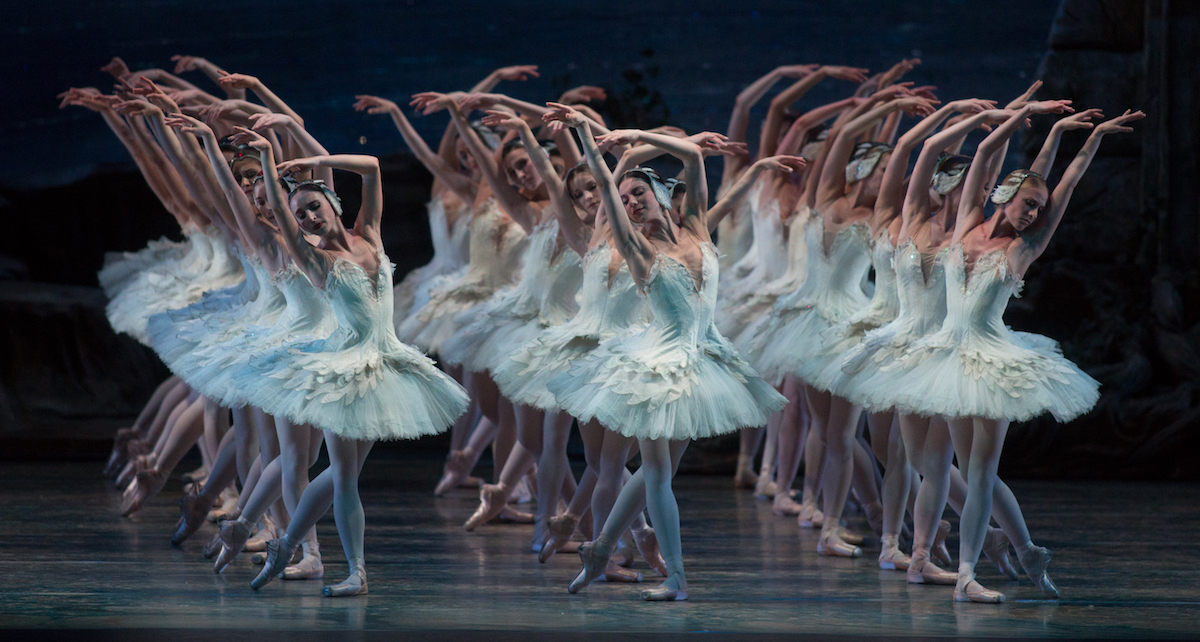 American Ballet Theatre (ABT) brought its acclaimed production of Swan Lake to the Opera House at the John F. Kennedy Center for the Performing Arts, and it was a thrill to be there on opening night to witness the gorgeous spectacle for myself. Although much of the buzz around the performance centered around Misty Copeland’s reprise of Odette-Odile, the lead role was actually portrayed by six different principal dancers over the week long run; I had the pleasure of seeing Hee Seo embody both the vulnerability of Odette and the fire of Odile. The choreography by Artistic Director Kevin McKenzie was in the tradition of Marius Petipa and Lev Ivanov with the addition of some beautifully executed original scenes that gave this production a more contemporary, almost cinematic feel. 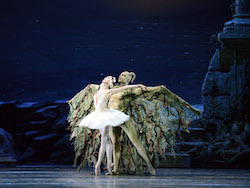 The production began with a stunning prologue, which was easily one of the most memorable scenes of the nearly three-hour program. Unique to this production, the prologue quickly pulled the audience into the world of this work — a dark, magical place where the gilded promises of romance come to tragic ends.

As the orchestra brought Tchaikovsky’s rich score to life, a ghostly light shone behind a giant silk scrim which was painted in the manner of Monet’s famous Waterlilies. Then the elegant form of Seo as Princess Odette emerged from the shadows, moving breathlessly across the stage in a lovely whisper of a gown. Unbeknowst to her, she is being watched by the grotesque form of von Rothbart, a muscular winged creature with horns, portrayed by Patrick Ogle. As Ogle retreats back to the shadows, Thomas Forster as von Rothbart’s alter-ego, a regal prince in shimmering purple, appears and draws Odette to himself by the sheer force of his magnetic charm. Too late she realizes his charms are a trap; she is caught, pulled writhing and voiceless into the shadows by Forester. Almost instantly, Ogle steps out of the shadows clutching a restless white swan to his chest, and, with a devilish grin on his face, exits stroking the captive bird. When I left the theater that night, this was the image that still haunted me — his apparent delight in the brutality that rendered Odette powerless.

The silk waterlilies were then quickly swept off to reveal a joyful pastoral scene outside the grand façade of Prince Siegfried’s castle. Awash in golden light, a parade of aristocrats in pastels, reminiscent of French macaroons, mingled with some very well-dressed peasants in a series of festive dances in honor of the Prince’s birthday. Usually, I find this seemingly endless stream of dances in the Prince’s honor a bit tedious, so I  was surprised to find myself so captivated by men’s ensemble work in Act I. While the women’s ensemble was quite uniformly alabaster, the men were incredibly diverse in look and yet amazingly unified in their technique. Every time they took centerstage, it was exciting to see them move together with such clarity and precision even when executing explosive jumps and energetic turns. Cory Stearns was also very elegant and powerful as the amused and slightly melancholy Prince Siegfried. Each of his brief solos were lovely with easy, soaring jumps and long, regal lines. Plus, Duane Schuler’s intricate costumes, as well as the decadent set, were also a delicious feast for the eyes. 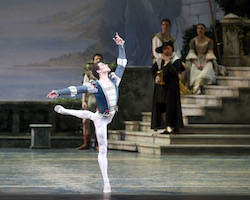 Keeping the action moving, a velvety curtain evoking a forest was pulled in to obscure the usual set change from Act I to Act II, so Prince Siegfried and friend were able to play out the pantomime of hunting the swans while an unseen army scurried about behind them. The first entrance of the flock of swans is always magical, but being transported to that hazy lakeside scene without a preceding intermission made it all more incredible. The choreography in this section was solidly classical with most sections appearing identical, or remarkably similar to, the Maryiinsky version I memorized as a young ballet student. To their credit, the ABT women were so clean and precise in their execution of all those multitude of weight shifts, line changes and iconic stylized poses that they gave the sense of the swans moving as one, as if one organism really.

At one point, all 26 swans are posed in a dense form, perfectly still and seemingly breathless, awaiting the impending entrance of Odette. Just before the princess enters, the Prince lightly touches one swan and the entire flock flinches in fear, shifting to a sort of cowering pose in an instant. This moment was so powerful that it elicited both gasps and giggles from the audience. Assumedly, the other swans, like Odette, are women who have been abducted, trapped and enslaved by von Rothbart for his own purposes. Like modern-day victims of human trafficking, they are forced to protect their abuser in order to survive as evidenced by their efforts to shield von Rothbart from the Prince’s bow.

Honestly, this was the first time I watched Act II of Swan Lake and really appreciated the deep tragedy at the heart of that familiar, haunting image of so many nameless, feathered women nestled together. Later, when Odette first begins to dance with the Prince, Seo was so magnificently vulnerable, both physically and emotionally, that she evoked for me the pain of an abused women struggling to trust again. Thinking about how soon she will be betrayed, I felt more somber than usual as Stearns and Seo enacted all the usual moments of that famous Act II pas de deux. 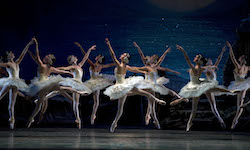 The Swans from ABT’s ‘Swan Lake’. Photo by Gene Schiavone.

After intermission, we were transported into the opulent Great Hall of the Prince’s castle for Act III, which did not disappoint. Usually, the pas de deux for Odile and the Prince is highlight of Act III, but I have to say that Forster as the von Rothbart’s alter-ego stole the show. He slinks in with Odile on his arm and quickly sends her away to distract the Prince while he proceeds to seduce all the princesses, as well as the Queen herself. It was delightful to see him wooing the princesses one moment and then jump into the Prince’s throne to flirt with the Queen. Forster’s dancing was as smooth and buttery as his playboy persona, and the audience loved every minute he was on stage.

All four princesses also did a great job pulling off complicated choreography while also falling over themselves to get close to Forster like a group of bumbling, starry-eyed teenagers. When Seo and Stearns returned to the stage for their pas de deux, they danced well together, but I sensed a bit of disappointment in the audience that the Forster moment was over.

Swan Lake usually ends with the apparent suicide of both Odette and the Prince, so I was surprised when I actually gasped as Stearns took a running leap and plunged into the darkness after the princess. ABT’s version musters up a bit of a happy ending with final image of the lovers united in death in the silhouette in the shape of a moon. Though I didn’t really care for the gesture, I can understand the inclination to send the audience out on a more hopeless note, but it didn’t work for me. As I drove home that night, I kept seeing the image of von Rothbart with that devilish grin on his face, stroking that captive bird, and it humbled me. I don’t always appreciate what an incredible gift it is to wake up every day and live out a life of my own choosing.