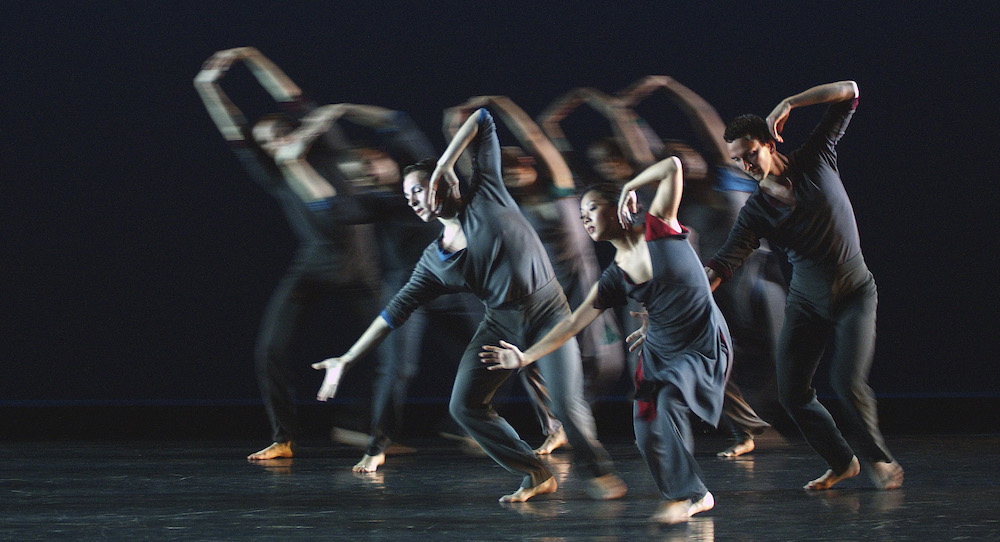 There’s just something about the ephemeral magic of dance art — the way nuances of movement align with nuances of music, the way lighting bathes dancers’ skin, the way costumes ripple and flow as dancers extend limbs, turn and leap. Viewing the José Limón Dance Company’s recent program at The Joyce Theater, the beauty of this ephemeral magic, and why it matters in today’s world, hit me like a wave. The program presented two of Limón’s works and two far more recently created works. Thus, I had another meaningful aspect of dance art on my mind — the way we balance respecting tradition and pushing forward into the future, elevating the best of the old and the new. 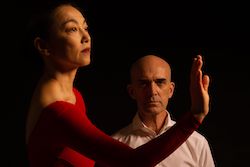 Miki Orihara and Stephen Pier in ‘The Weather in the Room’. Photo by Christopher Jones.

One of these more contemporary works opened the performance, Artistic Director Colin Connor’s The Weather in the Room. A truly beautiful part of this was its two central characters being older dancers. Their turns might not have zipped around as quickly or their joint initiations been as luscious as those of the lithe, young company members. Yet they brought a depth of feeling and artistry that was captivating. In a world where ageism is an all-too-commonly accepted form of prejudice, this kind of inclusion is wonderful to see.

To begin the work those two central characters walked in, bathed in an upstage left spotlight. Tension between them was in the air as they stripped away parts of their formalwear, as if to get more comfortable. One bent knees to turn, and the other reached to then arch the spine — as if in call-and-response. They moved with a satisfying clarity and understatement. As if in a moment of resolution, they had a tender embrace. Dancers in white soon entered, forming a half-circle around the pair, as if come to offer guidance or protection.

They reached toward and away from the pair initiating from elbows, and undulated through hips and spine. They expanded and contracted that protective half-circle. Their movement was methodical and precise, yet each dancer also applied their own color and flavor to the movement. Further sections brought duets perhaps reflecting masculine and feminine energies, and how challenges in romantic relationships reach far beyond this one couple — they’re a quite widely experienced phenomenon.

In one of these duets, I most acutely experienced that appreciation for the magic of dance art — for when the dancers’ artistry, the movement, the music, the lighting and the costumes all come together to create something uniquely captivating in that moment. My soul felt stirred.

The atmospheric changes (from quick shifts in music, lighting and movement quality) conveyed “the weather in the room”, the shifts in emotional quality in the main figures relationship. In the work’s final minutes, the couple seemed to be in a much more harmonious and joyous place. The white-clad dancers moved off, full of easy grace. The couple shared a hug and a laugh, and the lights came down. This confluence, along with how they presented themselves throughout the work, made me imagine the white-clad dancers as some sort of guiding angels or spirits. Once the couple was in a better place, they left, as if to say “our work here is done.” 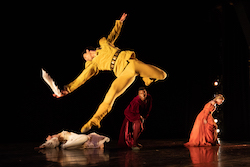 The classic Limón work, The Moor’s Pavane, followed Connor’s work, to close out the first act. The work masterfully blends the period formalism of the Middle Ages with the passion and pathos of the dramatic story’s events. From the dancers’ commitment and command, to the elegant period costumes, to the emotionally vivid score, it all pulled me right into the story. I thought about how its themes of suspecting and fearing “the other” resonate today. With that, I felt that I was once again reminded of the importance of dance art.

Opening up the second act was Francesca Harper’s Radical Beasts in the Forests of Possibilities. From the outset, the work offered a clear, enticing atmosphere; as the first notes in the electronica score rang through the theater, low lighting complemented it to begin building an air of unease. At the same, diverse qualities in the movement and an overall energetic atmosphere brought a sense of hope for something better being possible. A soloist opened the work, reaching limbs and undulating through her spine as if something outside her own will and body was part of what was moving her. Other dancers entered, moving in similar qualities yet in their own unique movement signatures. The spotlight moved centerstage to focus on a pair pushing against each other, as if in struggle. There seemed to be impetus for action and objectives from various forces.

Into further group sections, that feeling like something outside of the dancers’ will and motivation was partly moving them, balanced with their own. Aspects such as focused gaze, articulation and musicality compellingly created these effects. Also compelling was moving amongst various qualities, on a spectrum between notably accented (akin to hip hop dance’s “popping and locking” idiom) and smooth and flowing. This spectrum of feeling in movement made me think back to the “forest of possibilities” in the title. The dancers, these “radical beasts” exploring all of these possibilities, were evidently enough animals with primal instincts in tension with a far more highly evolved nature. Physically virtuosic feats, such as fluid and quick flips in the air, made me think of this primal physical nature connecting us with wild animals, using physical abilities for survival. Aligning with that more evolved part of us, I thought about where self-expression and creativity for their own sake played in here.

Also bolstering this feeling of various qualities offered, and tensions between those qualities, were dissolving of clear formations into other formations at a few points — from formality to organized chaos. These formations also offered structural clarity, such as at one point two dancers dancing while standing and one dancer moving from the floor. The dancers executed the movement danced within these formations with a mysteriously beautiful blend of strength and ease. I was fully intrigued and fully invested. Hearing their audible, rhythmic breath, evincing the raw physical effort of their work, only pulled me in further. Also of note were how some of those structures and formation shifts were repeated a few times, pointing to habitual action and — in a way — building a meditative quality.

The ending rounded out all of this food for thought. Most dancers exited, yet one remained, seeming pensive and introspective. This creative choice underscored the meaningful question of when others leave us, and we are alone with ourselves, what’s there?

José Limón’s Psalm closed out the program, and had that theme of the individual versus the collective still humming through my mind. A soloist expressed pathos and personal pain through a sharp, agitated feeling in his movement, while a remaining group of dancers expressed strength yet ease in their movement. A score of religiously-based choral singing brought a spiritual dimension to the work. Plain grey costumes and shades of yellow in lighting allowed me to apply my own imaginings to the dancers as characters and the story. Throughout the night’s works was important meaning to human life, in oneself and in community, with the magic to keep me engaged enough to truly appreciate that meaning. With both meaning and magic, the limit to what accomplished dance art can offer seems just about unparalleled.