Dancing together is arguably one of the most innately human, if not the most innately human, thing that we can hope to do. Rhythm, kinetic energy, coming apart and together in space — these elements and more can connect us in very unique ways. Through a gathering of disparate artists and audience members coming to honor their work, this sense of community was palpable at the most recent Third Life Choreographer Series installment.

The performance began with Director and Founder of the series, Kelley Donovan, sharing that she started the series in large part to offer opportunities for artists to experience one another’s work, since they’re “so often busy performing” themselves, she explained. She reinforced the informality of the setting, how artists would be entering and exiting to watch one another’s work. 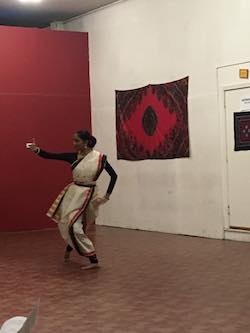 The lack of official lighting and proscenium stage fit this informal feel, which rather than off-putting served to reinforce that community feel to which Donovan alluded. Furthering this sense of community, she encouraged audience members to stick around after and chat with the choreographers, asking questions or just offering feedback on their work.

Interestingly, several works on the program aligned with this theme of community and interpersonal connection. The first was “Aftermath”, a duet excerpt from Pace of Dawn – A Climate Change Trilogy, danced and choreographed by Lynn E. Frederiksen and Paul Kafka-Gibbons. The beginning brought contrast to this sense – however, with one dancer facing forward (to the audience) and the other facing stage right – creating a perpendicular sense in space. As they began to move, one at first and then the other joining, there was a feeling of wanting to discover but also a hesitancy in doing so.

Some sort of connection between them developed, even as they didn’t directly interact with each other, through dancing the same phrasework in canon and other rhythmic variations. Their arms explored geometric shapes in space — lines, angles and half-squares. A point of connection came through both of them doing the same arm patterns. Crossed wrists became a motif, aesthetically compelling but also getting at an idea of openness to the other or lack thereof. Eventually, they did face each other, and move toward and away from each other, which began to bolster a theme that had begun to build earlier in the piece.

They even pushed each other off into turning at one point, for instance, conveying mutual support. Partnering, such as Frederiksen rolling over the back of Kafa-Gibbons and landing to move on her own again, was smooth and innovative. At other points, they independently made circling patterns in space, offering a contrast to the angularity in much of the piece’s movement. Much of this was in a very even tempo, with a live saxophone and piano (composed and performed by Liza Kitchell and Mark Chenevert) underlying their kinetic rhythm. It made me wonder what might have transpired with greater experimentation with other tempos.

I at first also wondered about how their interactions, distinct from when they danced apart, fit into the theme of climate change. Then it hit me that it was all illustrating how — whatever one may think or believe about climate change — it’s something to be faced individually or together. That in itself is food for thought.

Come Home, danced by Brittany Johnson and Megan Soucy, was the next piece underscoring connection and community. The program described that the work was “created to show no matter how much you struggle or alone you feel, there’s always someone there to help you come home.” Movement had a contemporary ballet feel, with turnout and other virtuosic ballet signatures but also joint release and a surrendering to gravity’s pull. Johnson and Soucy reached and pulled, as if desperately searching and grasping, fingers and arms fully alive.

Inventive partnering, including a support of launching into a leap over a thigh, helped build the idea of supporting each other through hardship. Literal offering of a hand to help rise to standing, on a few occasions, further strengthened this idea. Ending the work, the score’s singer sang “if you ever run away, you can come back home.” The dancers then embraced in a hug and swayed slowly side-to-side — a sweet, very human moment. It made me want to have seen more gestural, relatively slow, non-virtuosic moments like that in the piece. Nevertheless, the work was a blend of the very technical and the very human that fixed my eyes as well as grabbed my heart.

Closing out the night was Won: One, an intriguing but also heartwarming assemblage of speech and movement. Choreographer and dancer Alexandra Nunweiler accumulated movement, signifying through speech that she was pairing each movement (or short set of movements) with a number — in other words, saying “five” as she executed the movement associated with the number five. She added on, counting down from ten, and then repeated – but never said “one”. Community evolved through “breaking the fourth wall” — signaling to the audience that they should count with her. Light-hearted voices and little chuckles signaled that the audience enjoyed this involvement.

All the while, Nunweiler moved with utmost grace, but also power. She somehow mixed groundedness and lightness together in her body, bringing a feeling of child-like innocence and clarity. There was a sense that she was learning the movements that applied to each number, like schoolchildren learn their multiplication tables or spelling lists. To end she audibly whispered “one!”, facing the audience and just slightly crouching into low space, her body alive with  pure joy. The audience cheered — she had done it, conquered the “one”, “won” the “one”! We shared in her delight. It was a wonderful conclusion to a night of dances full of connection and community. In a world that can feel more and more disconnected, that’s a rare gift.