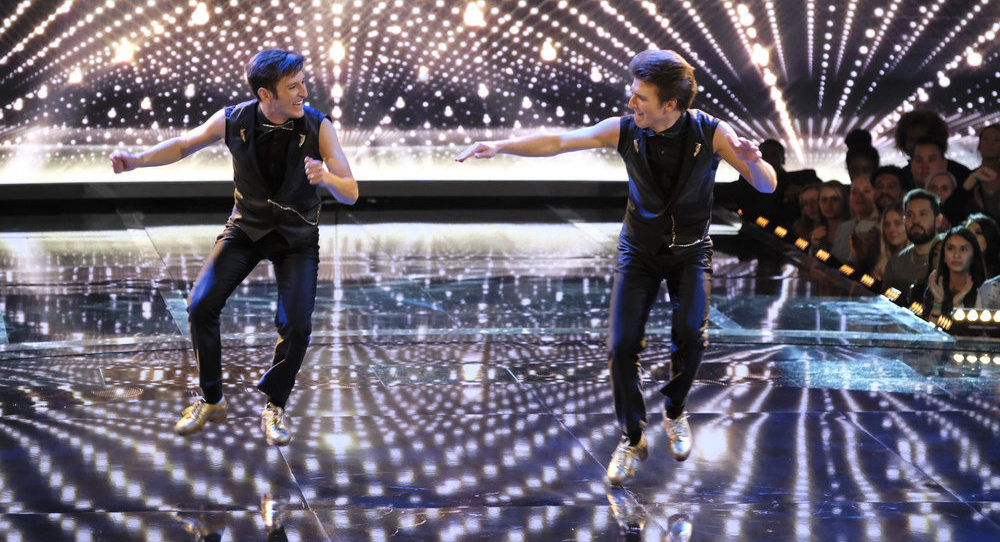 World of Dance is back and better than ever as it enters into its third season. Any age can grace the World of Dance stage and compete in any style of dance for the chance to win the ultimate prize of $1 million. The best of the best come from all over the world to showcase their unique dance styles in hopes to make it through to each round of the competition. While hopefuls have the chance to compete within one of four divisions – Upper Team, Junior, Upper and Junior Team — World of Dance has amped up its expectations by requiring a score of 85 to make it to the next round, which is five points more than the past two seasons. The stakes are higher than ever, and the competitors certainly felt it as they hit the stage for the first round of the Qualifiers. 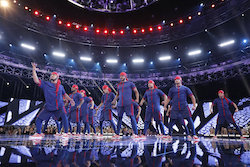 ‘World of Dance’ Qualifiers The Kings. Photo by Trae Patton/NBC.

With much anticipation, The Kings took to the World of Dance stage first in hopes of wowing the judges. Bringing a Bolly-Hop flair from Mumbai, India, The Kings hit the stage running and were off to a strong start. Not only did their music choice compliment their unique style, but the mixture of martial arts, b-boy, hip hop and a splash of Bollywood was the perfect recipe for an entertaining performance that left the crowd wanting more. The Kings brought show-stopping stunts to their routine and possessed a never-ending energy. It surely was a great way to begin the competition, and they set the bar high with a score of 97.7 and will be able to go face-to-face with a group just as passionate to win.

Funkanometry was another group that had the judges on the end of their seat. From Vancouver Island, Canada, this duo brought a quirky yet theatrical feel to their performance. There was mixture of old school and new school to their routine that was refreshing. There were comical moments woven in throughout. They were such great characters on the stage, and their popping and locking was phenomenal. Luckily, their potential was seen, and with a score of 87.3, Funkanometry is on to the Duels to battle it out.

Next to the World of Dance stage was the pint-sized powerhouse contemporary group, The Crazy 8’s. Dedicating the Qualifier round to one of their teammates, The Crazy 8’s brought great emotion and poise to their routine. There were wonderful acrobatic elements woven throughout the performance, and the technique that these young dancers brought to the stage was beyond their years. The Crazy 8’s made great use of the stage, and they exemplified strength and grace, which added to their phenomenal performance. After scoring. 93.0, The Crazy 8’s will be able to continue to leave their mark on the World of Dance stage in the Duels round.

Jonathan y Jorge brought salsa cabaret flair to the stage with their performance. From the time they entered the stage, they showed great energy. Jonathan y Jorge moved with strength and grace on stage and lit it on fire with their electric footwork. The chemistry between them was undeniable, in addition to their technique, which was nearly flawless. Jonathan y Jorge delivered a fun yet spontaneous performance that kept the attention of the judges. With a score of 88.7, they are on their way to the Duels to go head-to-head with another strong contender.

Hip hop duo Julian and Charlize were next to hit the World of Dance stage. With a routine choreographed by Julian, this duo showed amazing musicality that was complimented with intricate footwork. There was an unwavering chemistry between the two, which was amplified with the intensity of their movements. Julian and Charlize made great use of the stage with each transition, and their overall performance was strong and authentic, which was recognized by the judges. This proved to work in their favor as they’ve secured a spot in the Duels round. 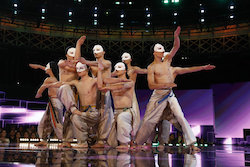 ‘World of Dance’ Qualifiers The Heima. Photo by Trae Patton/NBC.

The competition continued to intensify as The Heima, one of the best B-boy crews in South Korea, set their sights on making yet another mark on the World of Dance stage. The visuals that they brought with their performance were magical as they painted pictures with their bodies. The Heima showed such great strength in each element of their routine and brought a different take to breaking. According to Ne-Yo, their “elegant breaking” was something that World of Dance had not seen before. Apart from the various surprise elements and spontaneous nature of their routine, The Heima scored a 93.7 and are one step closer to the $1 million prize.

Bringing popping animation to the stage was Poppin John. His style was very technical with squeaky clean transitions that flowed effortlessly with the music. Poppin John had crazy isolations and unbelievable popping skill, which was evident in his innovative style. His movements were so precise that you almost forgot that he was a human dancing on stage. Poppin John’s articulation was off the charts and well-received by the audience and judges. With the challenge of bringing a story to his routines, Poppin John is on his way to the Duels. 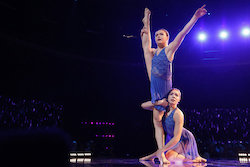 Another standout duo was Ellie and Ava. These sisters brought a natural connection to the stage that could not be matched. They both had beautiful lines matched with phenomenal extensions, which was evident throughout their performance. They danced as one entity and told a story that was clear in their routine. Although they each had moments that highlighted their strengths, they connected overall as one. They received a standing ovation from Derek Hough and a score of 92.3, which puts them a step further into the competition.

Gracing the stage with tap were the D’Angelo Brothers from San Cesareo, Italy. This duo brought crisp sounds and beautiful musicality to their routine as they jammed to a James Brown hit. The D’Angelo brothers complimented each part of the music with their tapping. They showed great entertainment quality and infectious energy on the World of Dance stage, which landed them a score of 87.3 and a chance to duel against another hard-hitter in the competition.

Lauren Yakima was another great contemporary performer who graced the World of Dance stage. Not only did she serve amazing technique and control throughout her performance, but more importantly, Lauren showed amazing athleticism and artistry all in one. She did not waste any time in showcasing her abilities and then took it a step further by commanding the stage from start to finish with great intensity. After a standing ovation from all three judges and earning a score of 95.7, Lauren is moving on to the Duels round.

The competition has already started heating up in just the first round of the Qualifiers, and there is no telling what great talent is around the corner. Will these hopefuls have their dreams come true as they move on through each intense round of the competition? Tune in and see!