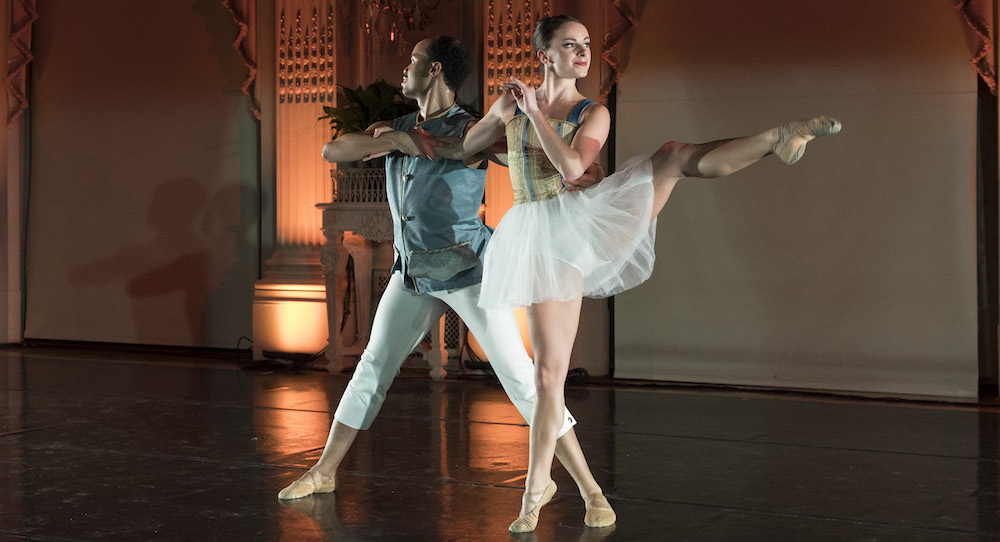 It’s undeniable that dance doesn’t have to he performed with any kind of score to be beautiful and meaningful. Yet live music can offer another sensory level that makes experiencing live dance all the more powerful. Newport, Rhode Island-based Island Moving Company (IMC), a group of various local musicians and the Rhode Island Civic Chorale showed this to be quite true in Creative Continuum – Dances with Live Music at the Veterans Memorial Auditorium in Providence, RI.

As IMC Artistic Director Miki Ohlsen also explained in her program letter, the night also illustrated the company’s past, present and future, with four works all by different choreographers and one of those works created by IMC Co-Founder Michael Thomas in 1986. Between separate artists, music and dance, past and present and future, creative connections were clear. The night opened with work from Island Moving Company Associate Artistic Director Danielle Genest, Fugitive Ground. Genest’s movement had a lovely blend of the abstract and geometric, and was technically and emotionally based.

In this work, lifted piqué arabesques melted from the core outwards. Battements rose from low space, the body rising to higher space with a feeling of transcendence. I most clearly recognized imagery of grounding and flight, of falling to rise again. The arms gently curved from a slight bend of the elbow, palms faced down or upward (rather than elbows lifted just slightly higher than the hands, in the classical norm) to evoke birds’s wings.

Formations created feelings of both flocking and flying with just one other, all dancers joined or in separated off into pairs. Grayish costumes, together with lower lighting, brought a twinge of a somber air. Before looking at the program and reading the name of the piece, or any notes included with it, I thought of Shawshank Redemption. Like in that iconic film, there was entrapment and disempowerment from outside forces, yet also empowerment and hope from within.

Hence, the movement of rising and falling, of expanding to curl back inward. The lilts and tonal shifts in the live music added emotional weight to all of this. With a complementary sensory experience, I felt the work deeper into my bones and into my soul. Looking at the name of the piece, even more of a sense of rising above, of freedom, of hopeful flight, became clear and resonated with me.

Boston choreographer Kevin Jenkins’ piece Flirting followed. It was a wonderful reminder that dance doesn’t have to inspire deep thought to be valuable – its worth can also be in bringing joy and laughter. Much of it involved duets, with ensemble sections here and there. Pastel colors in lighting and in the backdrop, with costumes in ruffly and classically-styled cuts (by Designer/Costume Mistress Eileen Stoops), echoed the Rococo era in fine arts – all about absolutely carefree, lavish fun. Movement juxtaposed the stately, lifted classical and the comical, flirty and fun.

Dancers dévelopéed or turned to lower bum to heels and scoot in a hopping motion. In other sections, one partner smoothly moving toward led the other to gracefully lean away. Spatial use and timing in these moments conveyed the chase, the “hard to get” game some love to play. Movements such as shaking the bum upon landing from a turn or leap showed full comfort with one’s body and one’s self in the moment.

The audience was disarmed, too; laughter rang through the theater. They could feel how dance can be fun, light and joyful. Music accentuated all of the above through staccato beats, pauses, and other well-implemented timing elements. Also allowing the lightness and fun was the dancers’ impeccable theatrical performances – in comedic timing with glances and movement in response to a partner’s, and in general demeanor along with action and theme. Everything came together, and – as with all successful art – something indescribable tied it all together in a neat little bow.

The third piece of the night was the premiere of Maurice Causey’s Tripping on our light fantastic toes. The title is certainly an accurate reflection of the piece’s mood. The dancers trickled on, spines undulating and “bootys shaking”. They wore loud, proud, bright colors, with costumes demonstrating no qualms about showing skin (but were at the same time totally tasteful and decent). Dancer Timur Kan even wore a thick, wavy blonde wig. There was a Lady Gaga feel to it, of standing proudly in one’s unique truth.

Soon they formed a line, a shallow diagonal that allowed all dancers to be seen while maintaining the shape’s linear feel. Their left heels popped, then their right. Arms raised to fifth en haut, then became a diagonal slope with the right arm dropping. This simple sequence of movement was captivating when these 10 committed dancers performed them all together. The section also felt like an homage to Trisha Brown’s Spanish Dance, wherein heel pops accentuate the hips of dancers standing in a line, arms most often raised but lowering at certain times to reinforce the current movement in action.

This section returned toward the end of the work, bringing it all full circle. In between, graceful turns, leaps and footwork combined with that fun and sensual movement. Hips shook, torsos rolled, and wrists circled. Much of this movement was in solo and small group work, which allowed the ensemble sections at the beginning and end to be more meaningful and memorable. Dancer Glen Lewis had a particularly entertaining solo of technical command balanced with pure joy and comfort in his body.

To end the work, after that recurrence of the dance in a line, the dancers “shook it” off, but Kan’s dancing persona – in that thick, wavy blonde wig – took some more time in the spotlight, taking a last opportunity to “shake it”. The audience cheered and clapped as he finally made his way off stage. Just as with the last piece, it was so fully clear that dance doesn’t need to be “heady” or “deep” to be valuable. Offering joy is more than enough.

Ending the night was Psalms, created by IMC Co-Founder Michael Thomas and restaged by Miki Ohlsen. Ethereal singing from The Rhode Island Civic Chorale added a whole other level to the experience, in comparison to the other time I have seen the work. All sensory elements combined, the performance at times felt spiritual and transcendent. This sort of performance can touch deeper places in our hearts and souls.

I also want to commend new IMC dancers Emily Baker, Gregory Tyndall and Timur Kan; it wasn’t evident that they had just recently learned the work, while their fellow dancers had performed it before. Commendations should also go to David Cicilline, Rhode Island Representative in the U.S. House of Representatives, in attendance on the night.

He gave a short speech before the performance describing recent successes at maintaining federal support for the arts, and his appreciation for IMC. His presence and thoughtful words represented a different, but equally important and valid, connection for the  arts. All in all, lovely music, thoughtful choreography and committed dancing came together to create an unforgettable night. Let us strive to keep such connections alive, well and multiplying.