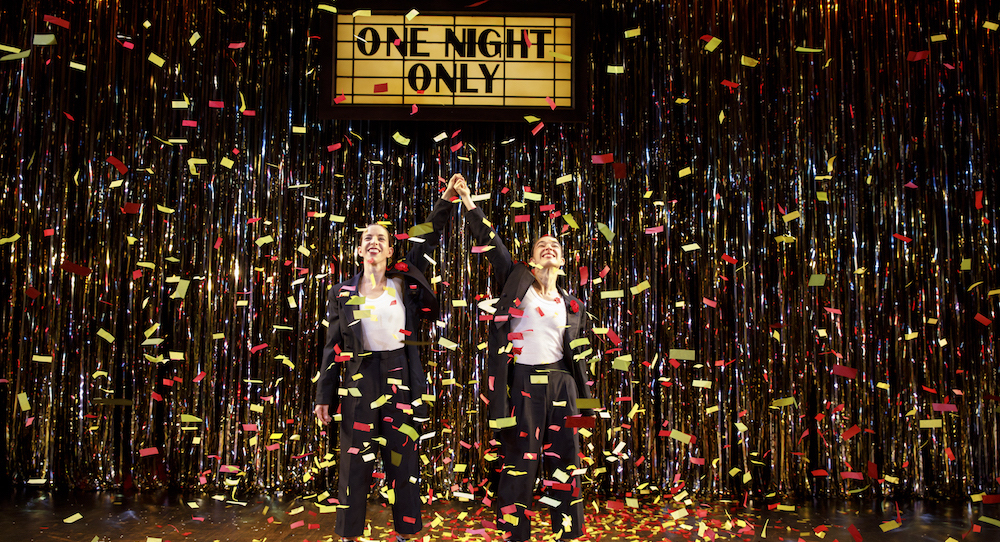 Get out the dressing robes, prepare the confetti, don your best slacks and feather headdresses; you’ve got a show to do. And for one night only, you’re going to explain to an audience who you are right now, an artist who’s an athlete who has “been in the game longer than most can hack it,” and somehow convince them that’s why they should be there. Taking a hint from the world of televised sports, Monica Bill Barnes & Company’s One Night Only, which made its run at New York City’s WP Theater earlier this fall, takes the pomp and bravura of dance, filters it through the announcer-fandom-hype machine of the sports world, and delivers a surprisingly raw take on what it is to persist as a dancer.

I’ve been a fan of Monica Bill Barnes for a while now, so I was thrilled to ask a few questions of her creative team, including fellow creators and performers Anna Bass and Robert Saenz de Viteri. Their brilliant use of stereotypically sports-like production elements created a completely different experience from any show I’ve seen, dance or otherwise. See what they had to say about their process and intentions below. 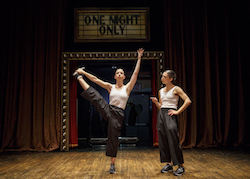 One Night Only feels like a culmination for anyone who has been following your work. It has the lights, curtain and tall feather headdresses, elements of a radio show, stereotypical male gestures, sneakers and more. How much did you want this show to feel personal or insider to those who are familiar with what you’ve been working on over the last five to 10 years?

“Every show we make is constantly looking back at what we’ve done before. I think we remain interested in a lot of the same subjects, such as how women are represented on stage or the passage of time, that we were interested in 20 years ago. As the culture at large shifts, or our lives change just simply by getting older, these ideas keep renewing their relevancy and revealing their depth and complication. The shows always feel incredibly personal to us. But that’s hopefully a way of creating an experience that is personal for every audience member, whether they’ve seen us before or have never even heard of us before.”

Why was it important (if it was) to draw on the parallel of athletics and dancers as athletes?

“Very early on in the process of creating this show, we read about an experimental football game in which they broadcast it on TV without any announcing, just the sounds of the game and stadium. The TV experiment was universally panned, newspapers essentially called it a series of movements without any meaning. So we started wondering if we can borrow those elements that sports use in order to create an intense investment (like announcing, hearing backstories, hearing about injuries, cheering, marching bands). Can we create a similar sense of urgency and a heightened sense of stakes? In terms of dancers and athletes, I think those parallels are maybe too intensely clear to most dancers. You rely on your body, you specialize in doing a very specific set of things that aren’t necessary once you leave the stage or the field (hitting a home run doesn’t get you through the checkout line at the grocery store any faster), you spend an inhuman amount of time doing just a few things, and it feels like there’s a limit to how much you’re able to do this in the long run.” 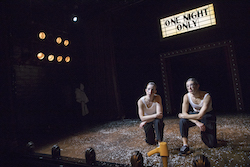 I found some parts of the show to be emotionally painful, probably because I am a dancer and I see and feel some of these struggles like constantly working on outdoing oneself or working through injury. Yet, others in the audience were laughing while I was cringing. Did you have particular expectations about how the audience would respond? That dancers and non-dancers would take away something different?

“Honestly, the fact that you were cringing and some of the audience was laughing feels like the biggest compliment, so thank you. Anything that is truly funny or truly sad seems to inspire both cringing and laughing, so it feels like we’ve done something right. It’s a sign that we’ve gone somewhere uncomfortable but also made you comfortable enough to have a personal reaction. While it seems like Monica and Anna’s injuries are no laughing matter, I guess comedy has always found it funny when someone else gets hurt. What might seem sad to one person internally is often funny when you can see it from another perspective. Mel Brooks said this best: ‘Tragedy is when I cut my finger. Comedy is when you fall into an open sewer and die.'”

Although you’ve used broadcasting before with Ira Glass, the elements of both radio show, like sound bits from the audience and of sports casting were truly unique and, in my opinion, brilliantly done. Did the decision to use these elements come out of your experience seeing effectiveness on the tour, or did it go beyond that? For example, do you think audiences would flock to dance if it were treated more like a live sportscast? 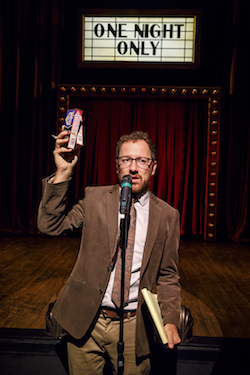 Robert Saenz de Viteri in ‘One Night Only’. Photo by Joan Marcus.

“One of the things we returned to often in making this show is how sports wrap up the audience (the fans) in the experience (the game). They do such a good job in creating tension. And then crowds leap to their feet in unison, they sing together, they even cry! All of those emotions are centered around people (athletes) moving, often in very repetitive ways. But those movements and the context around them give the fans the chance to feel their most stirred feelings.

We started to ask, how do they do it? And how can we do it? There’s a ton of talking — they interview players about their injuries, they interview fans in the parking lot about the game, the announcer calls each and every move with a sense of importance to it. Sportscasts are constantly reminding you of your own investment in the experience, so when the ball is hiked, you are ridiculously ready to see what will happen next.

We are always really inspired by other elements of the culture like sports. We made a show that is set within an office party, and we’re leading choreographed exercise tours through the Metropolitan Museum of Art this year. Sports is a very familiar language in America. Most everyone played something or watched something or even remembers playing something growing up. So it’s been a great lens for dance, a medium that is often more abstract or ambiguous.”

Speaking of bodies falling apart, how has it been doing a nightly style show?

“Amazing, honestly! We had a great five days when we were doing two shows a night and two runs of The Museum Workout in the morning — a four-show day! It really is such a privilege to be able to do this much performing. Monica and Anna do so much to take care of themselves, and they are so smart about that. But it’s also just what makes them the happiest. And I do think we have almost endless amounts of energy when it comes to doing something that actually leaves you fulfilled.” 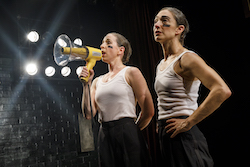 Will One Night Only, or a version of the show, tour? And If you can allow yourself to think about it, do you already have another project on the horizon?

“We’re certain we’ll do One Night Only again, either on the road or maybe back here in NYC. Our company turns 20 this year. And maybe what we have learned from working together for so long is that the next project is always on the horizon because we already know the most important thing about it — who is going to make it!”

Learn more about Monica Bill Barnes & Company at monicabillbarnes.com and catch them next in NYC for the Museum Workout, another project the likes of which you’ve never seen before.