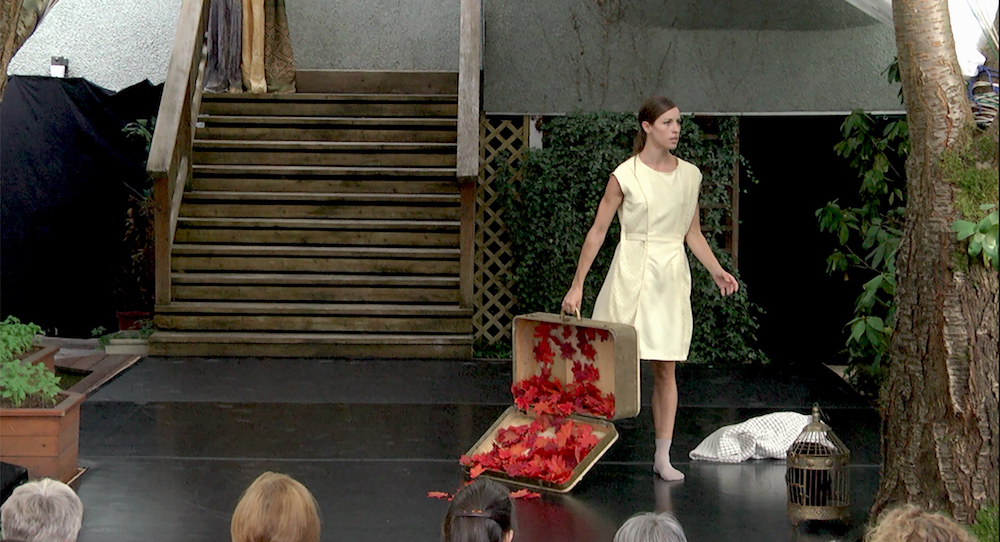 They say “home is where the heart is”, and for Alexis Fletcher and Sylvain Senez, that is doubly true, as their home in Vancouver, Canada, is where their passion project, outdoor dance festival The Dance Deck, resides.

Fletcher, a member of Ballet BC, and husband Senez, Ballet BC’s longtime rehearsal director, say that The Dance Deck began with an idea about hosting. Their house is nicknamed “Casa Om” and has always been a place of gathering, regeneration and creativity. In July 2015, they offered their first intimate, outdoor performance in their backyard, giving artists the opportunity to share their work at a “grassroots” level. That first show, The Dance Deck Debut, reached a sold-out crowd and received much enthusiastic praise. Since then, “Casa Om” has been home to two other programs in August 2016, and this summer’s performances are scheduled for August 5-6, and August 26-27.

“We believe there is an important place for alternative venues that allow people to come together and share art outside of the more traditional theatre spaces and the technical capabilities that come along with those spaces,” Fletcher says. “We hope to create an ‘art for art’s sake’ experience of sharing in live performance. We were inspired by the idea of well-established, professional artists showing their work in a stripped-down and more intimate setting. It has been a privilege to watch the idea grow and feel the enthusiasm from our neighbors, our community and all the artists who have been involved so far.” 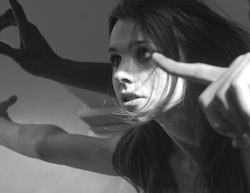 Fletcher explains that their deck, which was built by her father, transforms into a stage, with two cherry trees that frame the space. The deck becomes a legitimate dance space when they lay a sub-floor and Marley dance floor, remove one side of fence panels and create an audience seating area in the parking lot (which can comfortably seat 75 spectators). Since Vancouver often sees rainy weather, a tarp is set up to cover the stage and audience. Performers use the house and its sides to enter and exit, and while Senez runs the sound outside, Fletcher acts as stage manager from inside their house.

“We love what happens to dance in a small and site-specific setting like this,” explains Senez. “It is always interesting to see how the choreographers choose to utilize the environment because everyone looks at this from a different viewpoint. We do everything in our power to help them create this as well, if they want to use the house during their piece, if they want to hang things in the space, if they need props.”

Dance Deck doesn’t only bring together dance artists; Fletcher and Senez believe strongly in curating a program that is multidisciplinary, with room for dance, theatre, classical music and work from local singer-songwriters. 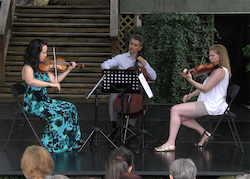 “We invite artists whose work we believe in and who inspire us in our own art and life,” Fletcher says. “We go largely by instinct about whose energies would mix well together on a program, and we gravitate toward individuals who not only are great artists but also are people we feel share our vision about presenting art in this way. We endeavor to invite representation from different parts of the community and sometimes also from outside Vancouver.”

This year’s season will begin with The Dance Deck Quatre on August 5 and 6, with The Dance Deck’s first-ever full-length work by choreographer Serge Bennathan, who is also a writer, poet and painter. It will feature dancers Gilbert Small and Stephanie Cyr, with original composition by Bertrand Chenier.

The second program of 2017 will be The Dance Deck Cinq, an evening of dance and live music to be presented August 26 and 27. Choreographers include Tom Weinberger with David Harvey, Peter Smida, Karissa Barry, Amber Funk Barton and Chengxin Wei. Cristian Markos of the Vancouver Symphony will be the guest solo cellist. 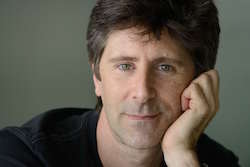 “We know from experience that many viewers of art are genuinely interested in the thought process behind the works and how they are made, and that as artists, it is important and very valuable to hear what people experienced during a performance,” Senez says. “As producers, it is also a great way for us to gather everyone together and show our gratitude for their presence.”

Fletcher and Senez say they are also working toward creating fall and winter events to be held inside their house, with one idea being The Dance Screen, a screening night for dance-inspired films. 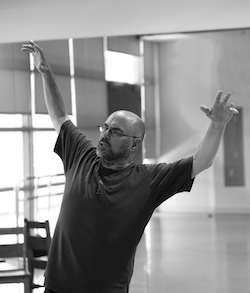 The Dance Deck seems to be a wonderful initiative to help keep dance and the arts alive throughout communities and even into people’s homes. “We are so fortunate to live in a society where artists are free to express themselves in any way that they choose,” Fletcher shares. “It is not like that everywhere in the world. With that freedom comes the responsibility to contribute with integrity and humility, and we hope to help facilitate this in a small yet meaningful way.”