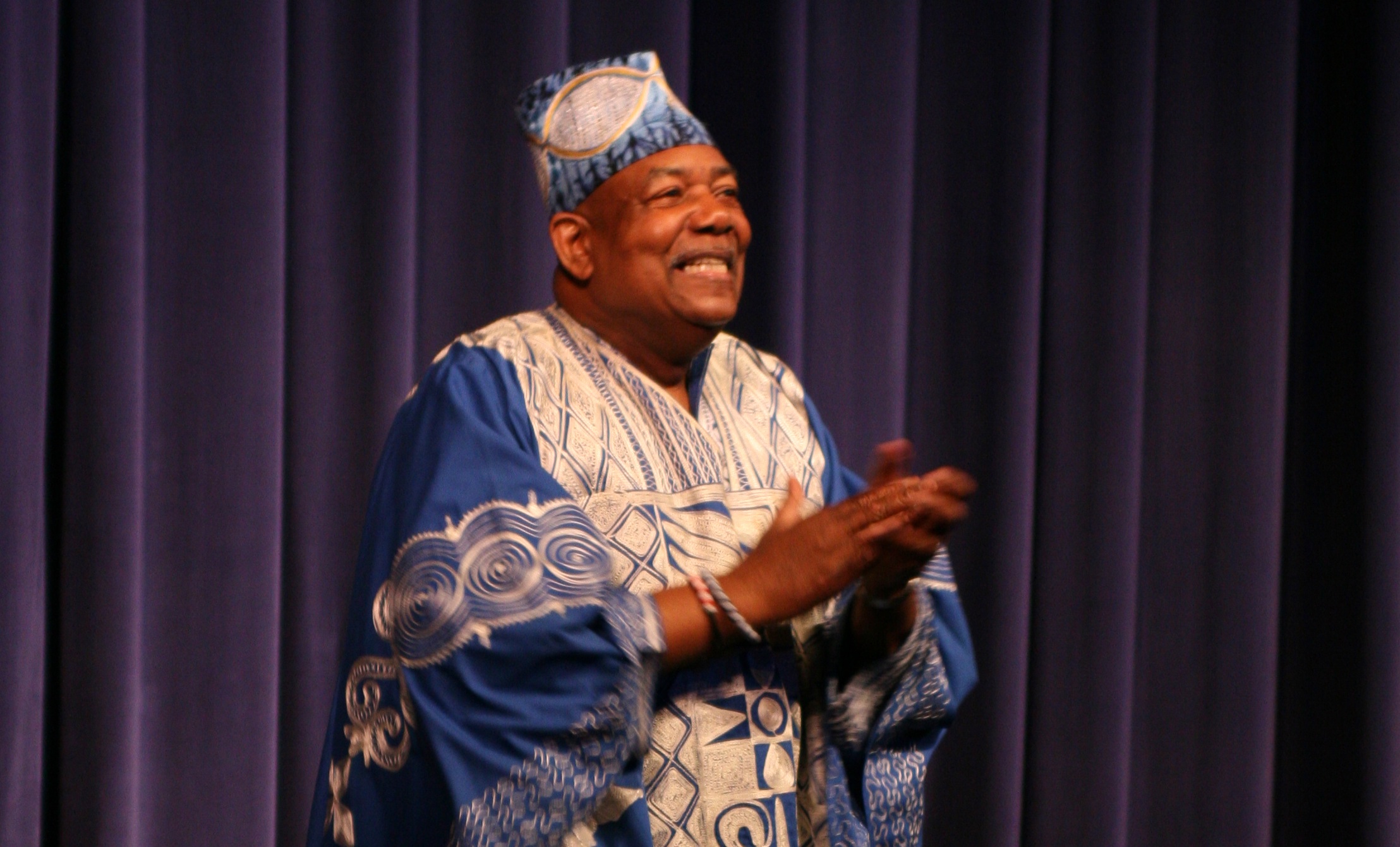 I was not close to Dr. Chuck Davis. In fact, I only had the privilege of taking a handful of classes from him in Chicago sometime in the mid-1990s. When I heard news that “Baba Chuck” had passed away, however, memories from the several hours I was a student in his classes came flooding back to me. A dancer’s life is filled with classes – daily, master and audition – and all those experiences and relationships contribute to developing a competent, capable and compassionate artist. Of all the monumental influences in my training, Dr. Davis’ classes stand out to me in a unique way that I’ll explain later. First, for those not yet familiar with Dr. Davis, his obituary on the African American Dance Ensemble page provides a concise biography and testament of the legend and his work:

Dr. Chuck Davis, known in the dance world with great love as “Baba Chuck”, founder and artistic director of the African American Dance Ensemble, based in Durham, North Carolina, and the Chuck Davis Dancer Company of New York, was an extraordinary dancer, choreographer, community-builder and artistic visionary who has demonstrated a lifelong passion and commitment to excellence in dance, teaching and sharing of African heritage, and the nurturing of the best of the human spirit in all of us.  He was the Founder and Artistic Director of Dance Africa, which is presented today in Brooklyn, New York; Washington, D.C.; Chicago, Illinois; and Dallas, Texas; Denver, Colorado; Columbus, Ohio; and Pittsburgh, Pennsylvania.

He was adjunct professor for NCCU with the Theatre Department and Duke University, guest teacher, choreographer, and performed for other dance festivals and events throughout the U.S. and internationally.

Dr. Davis is known as one of the world’s foremost and accomplished choreographers and teachers in the traditional techniques of African dance styles. He has traveled, taught and choreographed on five continents. He has lead the dance community across the country and internationally. He is beloved and mourned by his family, and equally by prestigious dancers and dance organizations, to school children learning their first dance steps – with equal energy and enthusiasm he works at all levels of the dance world and community, sharing his love of dance and people with an open heart. His slogan is “Peace, Love and Respect…for Everybody.”

That slogan, “Peace, Love and Respect…for Everybody”, embodies everything I felt while in the studio with Dr. Davis. I will never forget the energy and camaraderie he immediately developed among strangers in the classroom. I had little previous experience with African Dance technique at the time, aside from several weekly Dunham classes a few summers before, but I never once felt intimidated in Dr. Davis’ classes. There were many dancers like me, accomplished in other genres and inexperienced in African Dance technique. Baba Davis did not judge, and he did not self-aggrandize. He simply began to teach. It became clear to me as the classes went on that his lessons were based in dance, but his vision and his teaching had as much to say about life as about dance. The most concrete example of what I learned from Baba Chuck during these classes was a simple, but altering, behavior. As we each introduced ourselves to the class, he spoke to us at length about the self-defining difference in introducing ourselves with the opening phrase, “I am”, rather than “My name is”. This basic semantic change created a monumental shift in how I thought about myself as an artist, a dancer and a person. It made me realize how unusual it felt to be treated as an embodiment of talent, thought, intelligence and compassion rather than just a choreographer’s easily replaceable paintbrush. His classes empowered me to better utilize, inside and outside of dance training and performance, the tremendous gifts I learned from my instructors and artistic directors. Furthermore, my reflection upon his vision inspired me to seek and develop deeper relationships with my community at large.

Interestingly enough, my experience from briefly studying with Dr. Davis is not unique. By hearing of his reputation, I realize Baba Chuck had a similar effect on people everywhere. Every one of us could have easily been a face in the crowd to Dr. Davis, but he made each of us feel noticed and appreciated. The day Dr. Davis’ obituary ran, a couple of my friends posted personal remembrances on social media, and I was reminded what it means to have studied, even briefly, with a legend.

Lonnie Davis, an Atlanta-based choreographer and educator shared, “Meeting Chuck Davis while AADE was in residency in my hometown (Ft Wayne, IN) during my senior year in high school completely changed my life. He told me, ‘You have a natural talent and need to be shown how to use it.’ At that time, I had no formal dance training. Within months, I was on scholarship at ADF. He pushed so hard to make that a reality. It was already late in the season and nearly all monies had been awarded. I would run into him periodically during my formative years of dance training and performance. He was always encouraging and supportive about where I was headed and what was happening next. I’ll forever be grateful for his support. I’ll forever remember his smile and sheer delight for seeing this young kid from Indiana pursing his dance dream.”

Atlanta-based professional storyteller, actress, historical interpreter and author, Cathy Kaemmerlen, shared a tribute that encapsulates an overwhelmingly shared sentiment: “Even though Chuck Davis was himself larger than life, he made you feel like the star. He was an infectious presence in sharing his love for dance, life, and the human spirit.”

Dr. Davis was an example and an inspiration. May those who knew him, whether through chance encounter or extensive study, continue to treasure, teach and behave in a way that would make Baba Chuck proud.