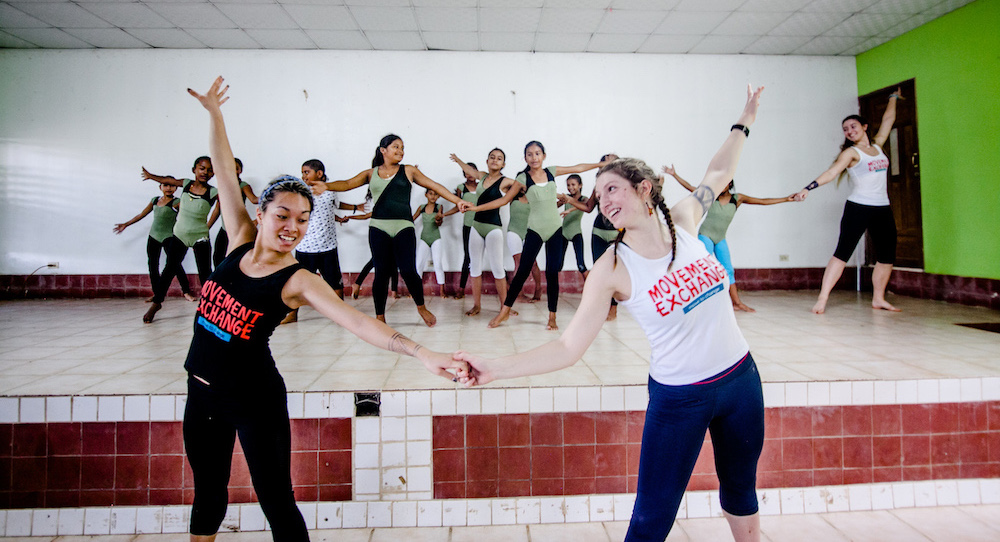 With a network of more than 20 university chapters, the nonprofit Movement Exchange is beginning to transform the use of dance around the world thanks to its predominately high school- and college-age volunteers. Through its programs, students across the U.S. are able to venture to global communities to connect with locals through movement. 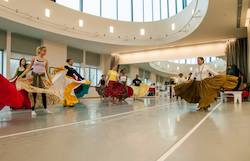 Founded in 2010, Movement Exchange combines dance and service through international dance exchanges and year-round activities in underserved communities. At this point, it mostly works in Panama to teach dance to children in orphanages and at-risk youth foundations. Last year, 83 students from across America participated in exchanges, with a total of 1,175 free dance classes being provided globally. This equated to 2,700 youth in Panama experiencing dance, perhaps for the first time.

Founder and Executive Director Anna Pasternak says she started Movement Exchange because she was “looking for a way to give back through dance and couldn’t find a dancers’ version of Doctors Without Borders.”

Pasternak tells Dance Informa, “At the time, I was living in Panama and volunteering teaching dance at an orphanage. There are many people who do amazing work on their own as volunteers, and I wanted to unite all of those individuals into a community of dancers who share the same passion for service. Our very first week exchange to Panama included dancers of all levels, backgrounds and ranging in age from 17 to late 40s, showing that dance is truly for everyone and the arts has a unique ability to bring people together. I felt strongly that the places we taught in Panama should continue to receive dance education in addition to the exchange weeks, so I set up year-round, locally staffed programs that continue to this day.” 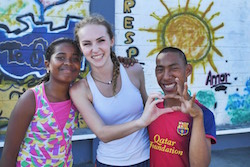 Now her dance diplomacy programs have turned into “something more wonderful” than she initially imagined.

“What started as service trips has evolved into year-round classes at orphanages and youth foundations in Panama and year-round classes throughout the United States taught by the network of over 20 Movement Exchange University Chapters,” Pasternak explains.

Now in the U.S., college student-led chapters are teaching “everywhere from adult day health centers to domestic violence shelters and at-risk youth organizations,” according to Pasternak. During the 2015-16 School Year, 780 free dance classes were taught in America. In addition, chapters organize dance education events on their campuses.

“They are redefining what it can mean to be a dancer in the university setting and getting many of their dance departments to get more involved in outreach work!” Pasternak proudly declares. 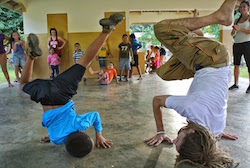 Panama Fellow Adele Switzer, former president of Florida State University’s Movement Exchange Chapter, remembers one moment from an exchange program that really touched her. “On my very first exchange to Panama in March 2014, I met a boy named Alex at Aldea SOS Orphanage in Panama City. Alex was a rather shy teenager and didn’t talk much, but when he danced, you knew his heart was filled with passion and light. He was clearly the star student in the class, performing our combos with ease and excitement. Just by watching him perform, we could all see he wanted to learn as much as he could about dance. We were all inspired to see how dance could pull him out of his shell, allowing him to express himself in a way that simply seemed to make sense for him.”

Switzer continues, “Two-and-a-half years later, I returned to Panama as the Panama Fellow, and one of the very first places we went was Aldea SOS, where I saw Alex for the second time. He was a few inches taller, but that same spark was alive in him. Since my nine months in Panama, I have seen Alex thrive with his dancing. He specifically enjoys hip hop and has choreographed his own dances, practicing with his peers in the orphanage. I’ve seen him take on leadership roles in dance classes, teaching the younger kids new choreography or helping them with a step. Alex reminds me of why dance education is so important. There are so many children out there who need dance to give them the courage and self-confidence to be leaders, to believe in themselves and to encourage them to reach for the stars.” 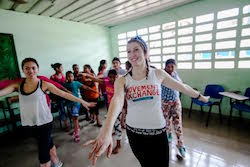 Dana Vanderburgh, dance diplomat from Indiana University (IU) Bloomington and former president of her college’s Movement Exchange Chapter, also recalls one touching moment from an exchange program in January in Panama. “As part of my Master’s research at IU, I conducted interviews with students, parents and community members in Metetí in the Darien Province, where we were teaching our dance intensive for the week. While speaking with over 15 different people, I was incredibly touched to continue hearing reoccurring themes from all my interlocutors. Every person I spoke to, regardless of age or involvement in the program, continued to mention how much Movement Exchange had impacted their community as a whole. All the parents mentioned how in the year between exchanges, the kids who had participated in our programs continued to get together to practice dance and the choreography we had taught them the year before. This was made evident when one of the old songs came over the speakers and all the older kids began repeating the choreo they had learned a year ago.”

Back in the U.S., Vanderburgh and her university chapter have been teaching weekly dance classes to kids at a local domestic violence shelter. She honestly says it’s a tough task sometimes with many kids there having behavioral issues. Yet, she testifies to still seeing real positive change.

“During our last class of the year, one of the most difficult students who had spent the entire year with us could not stop improvising throughout the class,” Vanderburgh shares. “She was filled with such joy during the hour and didn’t have a care in the world as she danced around the floor. One of the shelter volunteers remarked afterward that she had never seen her move like that or be so happy. I couldn’t have been happier! Despite the challenges we had faced teaching kids in such an environment, our goal of making the kids feel more empowered, happy and confident was achieved. The happiness I felt leaving that class made me even more driven to continue teaching dance to at-risk youth. It is where we can make the biggest difference!” 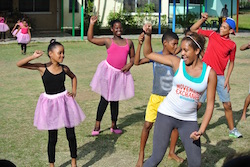 Looking to the future, Pasternak says she hopes Movement Exchange will continue to expand access to dance education to underserved communities in the U.S. and Panama. “Our dream is for Movement Exchange to be on every university campus and to perhaps include more high schools and professional dance companies,” she adds.

When asked if she’s considering expanding to other countries, Pasternak says Movement Exchange has actually run programs in India in the past and that this July they will be embarking on their inaugural dance exchange to Rio de Janeiro, Brazil. 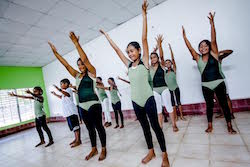 Summarizing the potential influence of dance outreach, Switzer says, “The beautiful thing about dance is that the qualities it requires — such as discipline, handwork, teamwork, specificity, risk, confidence and creativity — are all transferrable to the rest of our lives. Dance doesn’t just teach us how to move; it teaches us how to live.”