Dance is, evidently enough, an art form based in movement. Yet if movement is constant, is it really movement or just a norm — what is always is, has been and will be? In other words, movement means more when we experience the other end of the spectrum — stillness. In a perhaps larger and more metaphorical sense, movement in dance can be a grasping to prove, achieve and convey. Stillness can be an allowing of something to be what it is and having it speak for itself.

The assemblage of three works from L.A. Dance Project, shown in Boston through the Celebrity Series and currently touring nationwide, demonstrates this dynamic. Some of these works build emotional content, as well as exhibit the beauty within the moving human body, through incorporating moments of stillness. We see levels of greater sophistication through such moments. Some of these works rest in the art and truth that they are, while some strive to construct and convey a specific message.

The first work, Sibi Larbi Cherkaoui’s Harbor Me, is more of the former, with a bravery to take risks yet a seeming acceptance of what the piece can offer as enough. The piece opens with light streaming in from high on stage right, blocked as if, chillingly, through prison bars. A solo of smooth, sinewy movement commences. Shadows add to the intrigue of a beautiful exploration of subtle movement possibilities. Another dancer joins, then a third. Two dancers exit, and a solo of a more muscular and athletic quality begins.

Onward through the piece, this three-and-one structuring continues. More duets could offer valuable choreographic exploration, as odd versus even groupings can have meaningful differences. What takes the stage is striking and meaningful as it is, however. The dark color scheme (lighting and costuming by Fabiani Piccioli) continues to add shadowing and contouring of light that can be breathtaking. Certain moments of partnering are also memorable and innovative — such as a sharing of weight such that three dancers seem as one body, yet three arms swimming at three different angles cleverly poke holes in the optical illusion.

A program note implies that the piece aims to illustrate the challenges and inner world of refugees, as well as the overall situation of their state in the world – certainly a relevant and timely focus in 2017. The literal darkness of the piece, as well as the choreography structuring of both shared weight and sections of separation, convey that even without full illumination of the other, we can still offer support. Our similarities can overpower the darkness that might emphasize our differences.

The next piece, Justin Peck’s Murder Ballades, also aims to portray a specific situation and theme (if not overt message). It does so more explicitly, however, such as with a program note explaining the genesis of the piece and the cultural background at its root. The contention is that at the heart of mass shootings in America is a culture based in violence, dating back to folk songs about murder. 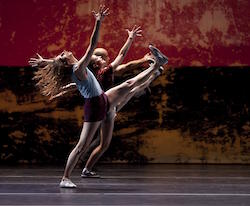 Costumes are of everyday American wear, with some of your typical teenager (such as short skirts and cut-off sleeves) seeming to reference school shootings. Frequent unison sections also echo teenage desire to fit in with the group. Some sections of choreography have an air of aggression, while others appear to depict support. In these implications, the piece is less successful at conveying its truth than was the first; it seems to mean less while directly saying more.

The work does offer moments of beautiful and well-crafted movement, however. In one phrase, for example, one dancer leans into another. The dancer receiving support raises a flexed foot to 45 degrees, and the one giving it pliés into the opposite leg. This phrase takes on slightly different tinges through subsequent repetitions. The movement is also most meaningful when it takes on a feeling of sustainment, a doughy stretching-out. The dancers truly commit to such qualities of movement for which the choreography calls.

The work has the raw material of further potential, a great candidate for workshopping and other processes of refinement. In all reality, that’s to some degree true of any work of art. The third and final work, On the Other Side, by Artistic Director Benjamin Millepied, appears farther along in that process. At the risk of simplistic reduction, it is an impressionistic painting come to life in movement. A geometric feel, through both formations and phrasework, implies a natural order — inherent in many impressionistic subjects.

A concurrent unpredictability, however, implies that we can never truly know how something will run its course — “on the other side” of present awareness. Just like impressionistic paintings, a clarity of structure co-exists with an intriguing qualitative fuzziness — as in, with a shift of perspective there is more to see and grasp. Behind it all is a bright backdrop neo-impressionistic painting by artist Mark Bradford. Bright coloring in costuming (costume design by Alessandro Sartori) match this visual energy. 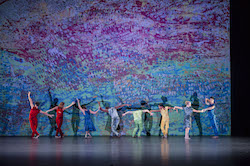 LADP in Benjamin Millepied’s ‘On the Other Side’. Photo by Laurent Philippe.

Dancers in this piece also put forth full energy and command of the movement at hand. One wants two solos — one from a dancer in red and another in grey — to be longer, simply from how strong and striking they are. Yes, strength, but there’s also a softness, an ease in movement sometimes technical, sometimes more pedestrian (and in the transitions between those two qualities) à la Mark Morris. Adding to the strength of that movement is contrast in stillness, dancers in occasional tableau.

Rather than overt stillness, the dancers still radiate the resonance of the movement just performed. Some of that movement offers metaphor of something of the natural world, such as a seeming orbiting of the group around a central axis, one hand in center and the other rising above a bent elbow. Orbiting imagery might not appear to have much to do with a slightly abstracted painting of flowers and an overall brightness (in color and movement).

Yet with an attitude of openness to nuance, one appreciates the work’s celebration of the movement around us, near and far — in a flower just outside one’s window or in a galaxy light-years away. There is stillness, too; yet even in “stillness” the energy of movement remains. Conversely, movement is movement because stillness exists. In a similar way, abstraction and subtlety can allow something meaningful to truly be heard. L.A. Dance Project’s assemblage of these three works allows dancers, dancemakers and dance-lovers of all kinds to see these truths more clearly.