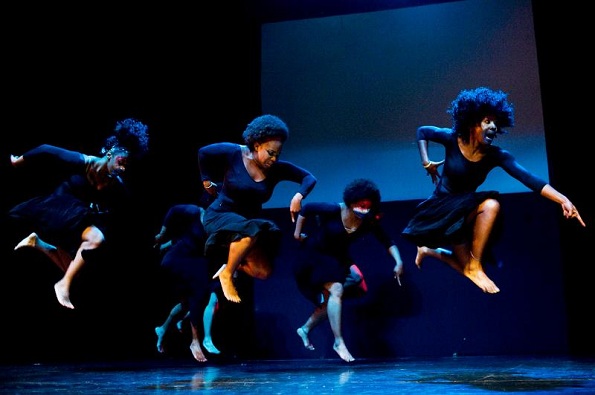 Muntu Dance Theatre, based in Chicago, is currently celebrating its 40th anniversary season.  Founded in 1972, the company is the largest African dance company in the US and holds central its focus to present authentic and progressive interpretations of contemporary and ancient African and African-American dance, music, and folklore. The Muntu company is acclaimed for its gripping ability to transform a space with infectious performance energy.  It’s also revered for honoring the Bantu word for which it is named – ‘muntu’ translates to mean ‘the essence of humanity.’

Dance Informa spoke with Artistic Director Amaniyea Payne and President Joan Gray who share that “the response (to Muntu) is the same no matter where” they are performing.  Ms. Payne describes it as a “collective energy…Muntu brings an energy that interconnects with the audience. People leave (our performances) with creative, spiritual and artistic rewards.”  Gray adds “the company is not happy unless people are trying to jump up on stage.  We don’t like it if people are sitting and quietly clapping.  When you come to a Muntu concert you will see people from the cradle to the grave…we like it when the audience does the ‘amen’ of what we’re doing!  We see our cultural connections to each other as world citizens and the art making we do as being that connection. We want to share it.” 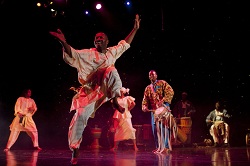 Muntu is best known for its historical works and, according to Payne, frequently collaborates with elders, scholars and practitioners who specialize in the study of a particular dance in order to honor both the research and creative responsibility associated with this type of work. Payne says, “We project the most authentic aspects of (the work) to complement the creative.” Gray adds, “It’s very important for us to present positive and accurate interpretations of the culture.  We are very interested in how African culture has influenced dance and music of people in countries around the world where Africans are now settling.  For example, we spent several weeks in Brazil researching cultural connections between Brazilian culture and African culture. The resulting choreography reflected the convergence of these cultural styles – what we call the race memory.”

Muntu frequently shares concert billings with other dance companies; often in the crowd pleasing position of opening or closing the show.  However, during this anniversary season Muntu will perform its first ever collaboration with dancers from another company.  Muntu and DanceWorks Chicago were awarded a grant from Audience Architects to broaden audiences by going to venues where they had not previously presented themselves. So, on the weekend of May 11-13 DWC and Muntu will perform at the North Shore Center for the Performing Arts in Skokie, IL.  Payne beams as she discusses the project. “DanceWorks Chicago opened up its studio for our dancers to engage in the genre of ballet and I will be going to teach at the Ruth Page Dance Center to engage the DWC dancers, and that community, in an African Dance experience.”  The grant provided the two companies the opportunity to bring in a dynamic choreographer, Monique Haley, a former Company member of River North Dance Chicago.  “She has been able to put a piece on both companies that we will perform during the shared performances in May and separately while the companies are on tour independently”, explains Payne.  The piece is titled See (in) Me and wrestles with issues of stress, stamina and trust; all set to a rhythmically inclined score.  Payne adds that it has been rewarding to see the dancers and artistic directors, “have the opportunity to work, share, and inform each other.” 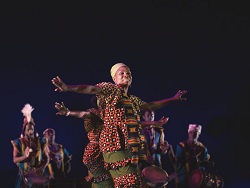 The community qualities that are essential to the collaboration with DWC are evident throughout all of Muntu’s work.  Muntu maintains a teaching presence in 11 Chicago-based schools and community organizations and offers open adult division classes to the community.  Gray says, “Muntu has a dual function, we are definitely a professional performing arts company that performs around the world and self produces our season every year.  But equally as important to me, is that when there is an important event of significant happening in the community, Muntu is called upon to bear witness to that and to bring the appropriate cultural celebrations.”  Muntu is ‘honored’ to regularly perform for weddings, funeral celebrations, parades, block clubs, and during visits of foreign dignitaries.

Dance Informa asked Gray and Payne what advice they would give to fledging dance companies.  Gray advised, “be sure that you have a vision for your work; and you have to have clarity about how you are going to express that vision. You’ve got to have something to say. You also have to set realistic goals and objectives for your work and how you are going to advance that work and take it one step at a time. You have to think about a model of operations for the resources that you have or you will have in the foreseeable future. When Muntu first started it was the artists who did all the management stuff, too.  We weren’t paid at that time…we had to do everything.  If you are not prepared to do all of those different types of things until you get to the level where you can contract people, you shouldn’t get started. I don’t believe that every dance company has to have a vision of (lasting) into perpetuity.  Every dance company that gets started may not want to be an institution.  They may want to survive the lifetime of its founding director.  Be clear about what you want to achieve.  If it’s for a single choreographer’s vision, that’s fine, just explore different ways you think. Holistically, it can work for you.”  Payne adds, “you cannot do this by yourself.  It’s important to get a trustworthy team that shares the vision.”

When asked to reflect upon a single wish for Muntu during this anniversary year Payne confided, “one of my single wishes is a wonderful facility in order for Muntu to continue to do the valuable artwork and share it with the community.”  Gray adds to that, “where the whole organization could be under one roof.  We know we could deepen our impact and our expression, and make it easier for everybody, if we were all under one roof.”

Connect with Muntu’s website www.muntu.com to learn more about the company and this season’s 40th anniversary celebrations.  As Payne said in closing, “be part of the celebration!”