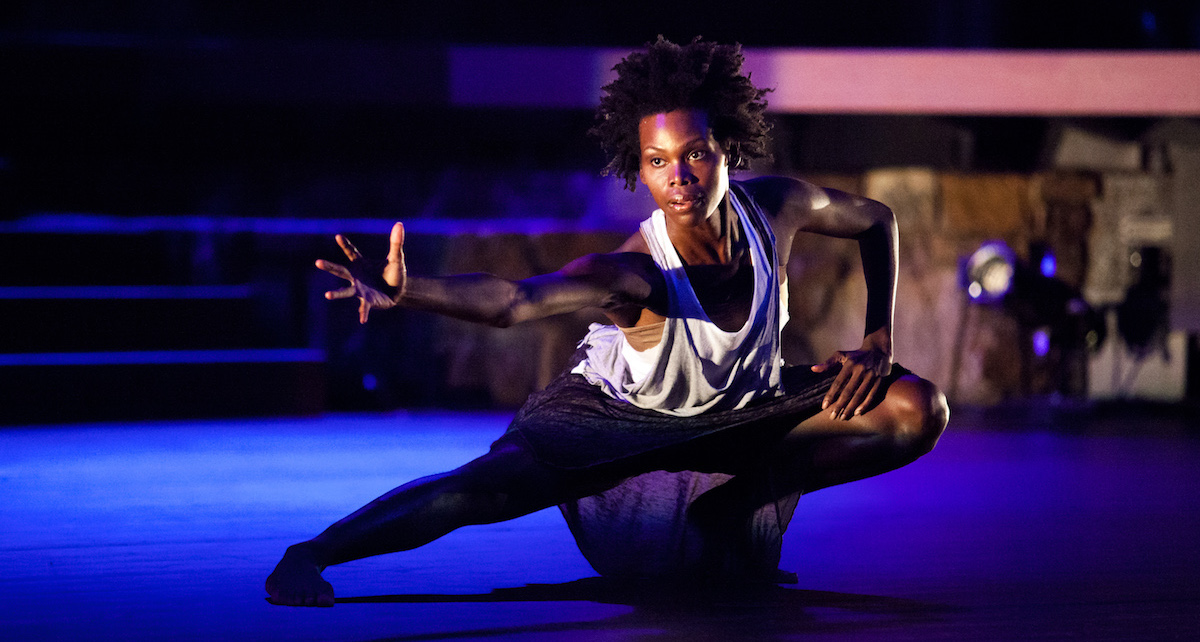 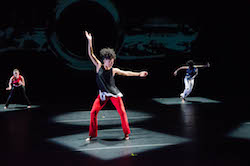 Urban Bush Women in ‘Walking with ‘Trane’: Side B. Photo by Judith Stuart Boroson.

After years of admiring Jawole Willa Jo Zollar’s work from afar, I was excited to have the chance to see her company Urban Bush Women perform one of its newest works, Walking with ‘Trane, in the lovely Eisenhower Theater. As I skimmed through the program, I realized that Samantha Speis, a former D.C. area dancer, was credited as both a choreographer and performer, so it was an added bonus to look forward to seeing a familiar face on stage. The production unfolded in two acts, Side A and Side B, set to very different arrangements of the music of jazz legend John Coltrane. The work featured Speis, along with five other women and one man, as well the pianist, George O. Caldwell. While I am not a jazz aficionado by any means, I do enjoy Coltrane’s music, so I was looking forward to seeing that tremendous sound interpreted by Zollar and her talented company.

Side A, also titled “Just a Closer Walk with ‘Trane”, began with a sort of invocation performed by the striking Chanon Judson, who undulates out of the shadows and seemingly conjures the other dancers in existence, drawing them out of the haze with her powerful gesture. One by one, the rest of the company enters, each one articulating a movement mediation of their own as Judson serves as a witness to the informal procession. At this point, the tension in the theater is  palpable as a pulsing, droning pitch continues to crescendo, and the dancers’ movements become more frenetic, almost ecstatic. There is an audible sigh of relief when the sound breaks and yields to silence for a beat before some more familiar licks of Coltrane’s music sing out. The change in sound cues a shift in the visual landscape as projections of clouds wash over the dancers thanks to a downstage mesh scrim. The effect is both soothing and haunting to the credit of the projection design team of Wendall K. Harrington and Shawn Boyle.

As the Side A evolves, a pattern emerges in which the world of the work shifts with changes in the music mirrored in changes in the projections, from piano keys to train tracks to curling cigarette smoke. All the images were striking and evocative, but at times the projections seemed to swallow up the dancers. Perhaps the projections were intended to ground this somewhat abstract exploration of Coltrane’s “musical life and spiritual journey” in the concrete here and now, maybe to make the work more accessible. Unfortunately, for me, the constantly changing projections were mostly a distraction from the lush, rhythmically complex movement explorations of the company and delicious intricacy of Coltrane’s music. 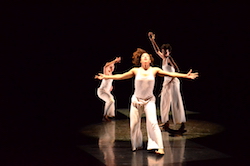 When all that faded away, I relished the visual silence as Speis took command of the space in the quiet and performed a sensitive, prayer-like solo. The rest of the company stood in the foreground melting impossibly slowly to the floor through a series of stunning hinge-like descents until Courtney Cook stood alone. Then Cook’s voice slashed through the near stillness with a raw cascade of vocalizations that struck me as akin to both scat singing and the speaking in tongues I’ve heard in southern penecostal churches. Her body echoed the sound with deep articulations of her torso as her shoulders hunched and fingers splayed in resonance with her voice. It was a tremendous performance that gave me the feeling of an altar call or an activist’s call to action. All the while, I kept waiting for that downstage scrim to be whisked away, wanting that barrier between the audience and the dancers to be finally lifted like the curtain being torn in the Temple in the Old Testament scriptures. But, I was disappointed. The curtain remained.

In the final section of Side A, the full company achieves the same feverish pitch of Cook’s performance with all seven dancers on stage alternately charging toward the audience and retreating in the upstage shadows. Some of the other dancers also free their voices, letting loose guttural cries and wordless proclamations, as they also toss off incredible leaps and soundless crashings into the floor. Again, I longed for that downstage scrim to be pulled away, and I desperately wanted to hit the mute button on a recorded narration that undercut the voices of the performers onstage. But, again I was disappointed; the curtain remained even as the last dancer slipped in the shadows and exited the space. 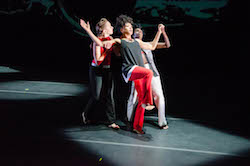 Urban Bush Women in ‘Walking with ‘Trane’: Side B. Photo by Judith Stuart Boron.

Side B, subtitled “Freed(om)”, was accompanied by pianist and composer George O. Caldwell, who performed masterfully with great precision, energy and an almost tender sensitivity to the dancers. Caldwell’s arrangement of Coltrane’s A Love Supreme invigorated the space from the start and summoned a quartet of dancers on stage who tumbled, spilled and leapt with abandon. This deliciously kinetic quartet quickly won over the audience and was definitely one the highlights of the entire program for me. The movement felt euphoric and joyously improvisational even in unison sections when the dancers moved together in tight formation. It gave me that feeling of playing between the notes of Coltrane’s music that I realized I had been anticipating, as if the dancers were swinging on the sound like some kind of sonic playground. When the quartet ended, the space settled in silence before a more reflective trio wove a transcendent spell, although the delicate dance of Caldwell’s fingers over the piano keys was sometimes more compelling than the repetitive articulations of the dancers. Then more quickly than I expected, the full company brought the second act to a close by stepping into the shadows beneath words lifted from Coltrane’s “Psalm”. It was a satisfying ending, but I left the theater still enchanted by that opening quartet, which was like a siren song, tempting me back to the stage myself.