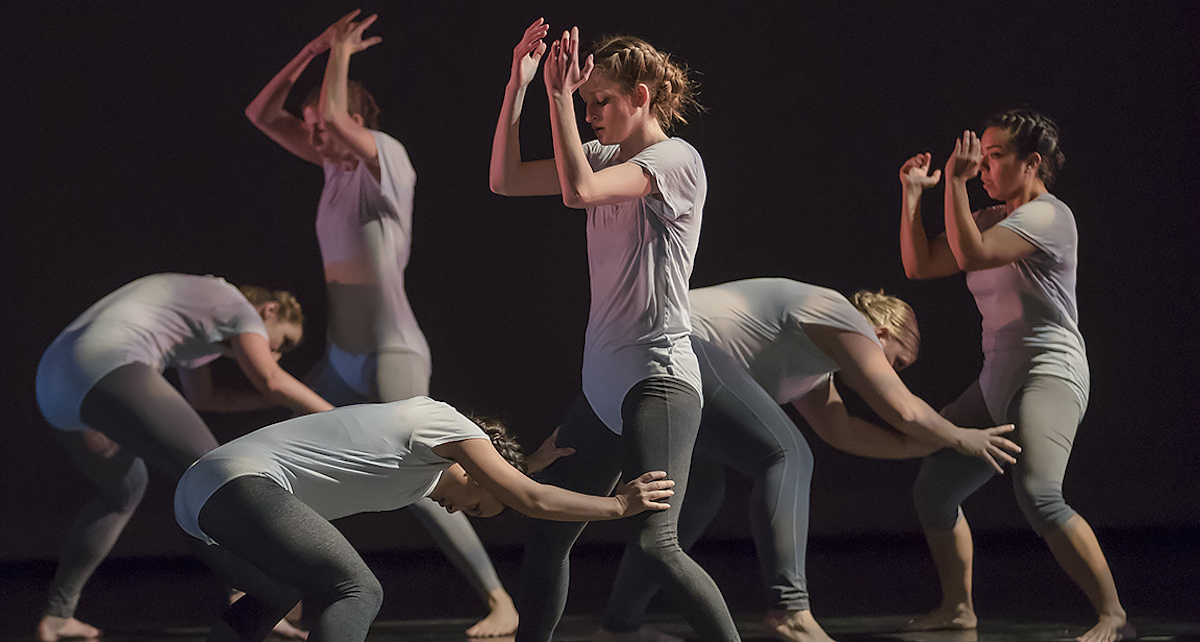 Dance Canvas, Atlanta’s platform for emerging choreographers, recently presented its ninth anniversary showcase at the Ferst Center for the Arts on the Georgia Tech campus. Curated by Founder and Executive Artistic Director Angela Harris, the show featured a line-up of new works by nine choreographers, who each brought a different tone and unique contribution to the diverse mix of voices and genres. 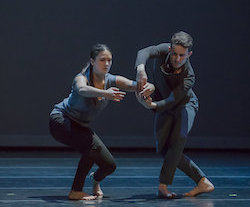 With both abstract contemporary works and light-hearted, high-energy pieces, Dance Canvas’ show once again offered an entertaining spectrum of movement styles and an encouraging look at all the local talent in Atlanta. Perhaps the best year yet, this program felt especially balanced and well arranged.

Kicking off the evening was Space Between by Isaac Lerner, a dancer whose background includes work with choreographers Doug Varone, Adam Barruch and Loni Landon. His contemporary piece was preceded by a question that was projected on the stage backdrop, asking, “What if lighting and spacing could drive a narrative forward as opposed to just the movement?” His multi-faceted choreography performed by dancers Louise Benkelman, Marjorie Gross and Honza Pelichovsky carried this inquiry onto the barren stage, with the element of spacing seeming to take precedent as they propelled themselves into lunges and their heads’ tilting drove them to new locations. Lerner’s frequent use of “hooks” — utilizing one’s feet or arms to clasp and fasten around another — was engaging. In general, his movement, set to the compositions of Arvo Part, seemed to flow from one step to the next with seamless transitions. The only disjointed moments came when the video projections of the dancers being projected up behind their movements did not line up with their steps’ exact timing on stage. While the film overlay contributed a fascinating “fourth dancer” to the work, it would have been better if the recording better synchronized with the in-person performers. 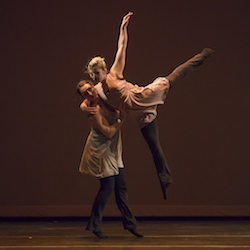 Next came one of the highlights of the night – Same Difference by Gierre J. Godley, a more experienced choreographer who holds a MFA from NYU’s Tisch School of the Arts. Everything about the piece was enjoyable – from the simple but appropriate costumes to the lovely, grounded, more mature female dancers. The work began with a quote from poet Maya Angelou: “I’ve learned that people will forget what you said, people will forget what you did, but people will never forget how you made them feel.” A quiet maturity settled into this piece as the dancers moved to “Selections from the Orphee”, a suite by Philip Glass and Paul Barnes. One particularly beautiful dancer was Karmyn Moton, who danced with significant grace and poise. 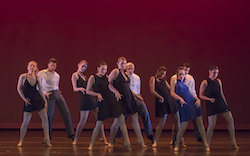 The third work brought an entirely different mood to the theater. This jazzy piece named Ever Evolving was choreographed by local dancer and teacher Jordan Keyon Smith, who recently performed in Atlanta Lyric Theatre’s productions of A Chorus Line and Peter Pan. It was vivacious and fun from start to finish, with the music of Duke Ellington and John Coltrane visually coming alive with sleek costumes (men in nice slacks and women in dresses) and spots of ballroom dancing influences. Jazz walks and lots of hip movements were punctuated by turns, leaps, isolations and flashy kicks. When the full group of 10 dancers came together, the piece was especially powerful. The lead female dancer, Kira Hennessy, was especially captivating with her bright, sassy smile and strong technique. 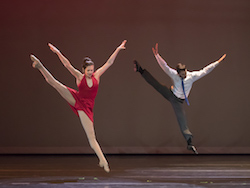 The next two works were quite unique in their own right, with the glow-in-the-dark balletic short dresses of Lindsay Fritz’s Out of Darkness providing a visual, quite literal representation of one girl’s friends leading her out of her gloom, and the film Id offering another work that used various camera angles and settings to pre-capture a young woman’s story of overcoming fear through dance.

Following intermission, Beth Del Nero’s I’m Game hit the stage, beginning with this quote from Shigeru Miyamoto: “Video games are bad for you? That’s what they said about rock-n-roll.” A highly conceptualized piece, it followed a group of female video gamers as they battled, lost and then won games. Between the various sections of sharp, at times robotic choreography and the aerial dance solo, the dancers would literally sit and enact a scene of friends playing video games, constantly reminding us what the piece was about. Props were a major part of this work, almost to a fault. The concept was intriguing and could merit a full-length show, but there would need to be more structured ideas, smoother transitions and less dependence on props. 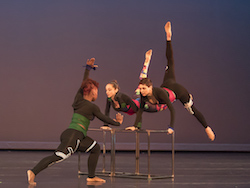 Raianna Brown’s emotional Converse of Silence, a contemporary piece set to “Her Story” by Rica G and music by Miles Davis, Gil Evans and Eliot Moss, preceded the fascinating eight-dancer work Fields by Emily Cargill. Fields proved to be quite mesmerizing, with dancers of all shapes and sizes attacking her chunky movements with force and real velocity. Almost as if electric currents surged through them, the young female performers propelled themselves forward into Cargill’s tight formations and groupings. The piece, which started with an intensely focused duet, soon moved into a turbulent whirlwind of low runs, deep squats and rhythmic pulses. One movement that was repeated over and over again were two dancers facing off, flailing their arms toward one another while in second position pliés. Cargill’s quote from Parmenides that was introduced before the work began only made it more interesting: “We can speak and think only of what exists. And what exists is uncreated and imperishable for it is whole and unchanging and complete. It was not or nor shall be different since it is now, all at once, one and continuous.”

Finally, the last work of the evening, After Sunset, was a delightful duet choreographed by Adam W. McKinney, a former member of Alvin Ailey American Dance Theater, Béjart Ballet Lausanne, Alonzo King LINES Ballet, Cedar Lake Contemporary Ballet and Milwaukee Ballet. With special support from Atlanta Ballet, the work featured two young, quite promising ballet dancers in a pas de deux that was elegant and beautiful. Interestingly, McKinney utilized a video projection in his work that featured the same dancers moving around and laying in a field. Shot with a drone, the footage was well done but felt somewhat distracting from the live movement taking place on stage in front of the screen. Perhaps a perfect balance can be found for a future production, as each element really did offer something distinctive and stimulating. McKinney and his dancers, Brandon Penn and Mikaela Santos, are all rather talented.

In conclusion, as Dance Canvas wraps up its ninth annual showcase and begins to prepare for its noteworthy 10th anniversary year, it’s clear that the organization is still offering an important platform for rising choreographers and artists. It offers a place for dancemakers to explore, experiment and further spread their wings. May Atlanta’s dance community continue to embrace its intrinsic value.

All photos by Richard and Holley Calmes, courtesy of Dance Canvas.