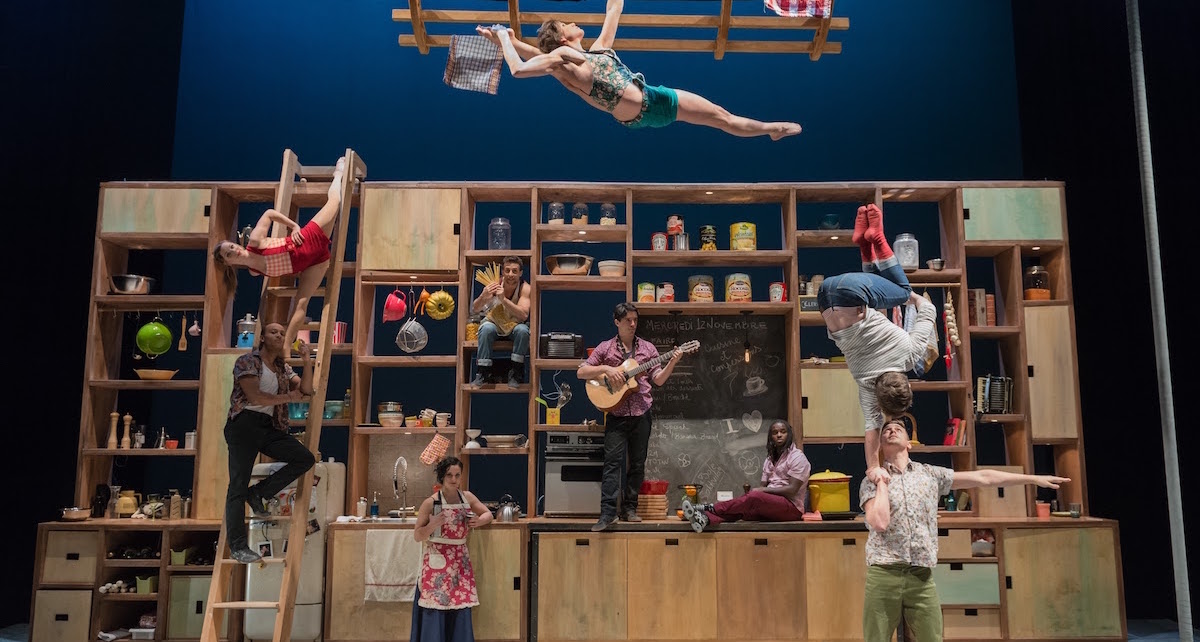 I’m pretty sure Mario Batali was sitting in the row across from me. I glanced his way before the show started when the performers were going up and down the aisles, excitedly sharing stories, cracking eggs and handing out chocolate kisses. It made sense that Mario (or his look-alike) would be at a show happily named Cuisine & Confessions, a production by contemporary circus company The 7 Fingers (Les 7 Doigts), that was kindled after co-director Shana Carroll’s husband came up with the idea to do a show involving cooking. But more than mere spectacle, this unique show takes a bit of cooking, a handful of stories, and a feast of circus acts and turns them into a triumph of compassion. 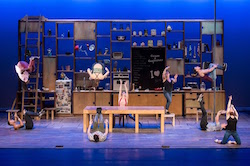 I’ve seen a couple of productions by The 7 Fingers, including Queen of the Night, a fantastical dinner production for which they did the circus components, and Traces, an off-Broadway show that floored me in the way it used circus to bring forth humanity. Because I still can remember the way these productions made me feel even years later, it came as little surprise that Cuisine & Confessions would do the same. As soon as you enter the theater and find your seat, the scent of rosemary trickles into your nose. It smells good! The dancers are running around, asking who can possibly crack an egg with one hand, and who can help fold the napkins. Already, without realizing, we are being asked to reach into our personal memories and remember who taught you how to use a whisk, and who made that bread of which you can still recall the fragrance when you think of them.

The show really begins and leaps into a beautiful acro-dancing opening sequence followed by a series of vignettes wherein nearly every dancer introduces you to his or her memories from childhood involving food, food as a representative of a significant time, and then takes you into another level of wonder by intertwining it with their acts. We have the perfect omelette and fries accompanied by angelic flights across the stage and dives through hoops, the aerialist contortionist’s borscht, sugary sweets and falling from a pole, memories of a round kitchen table and the baking of banana bread. Everything fit and everything made sense. The most dramatic moment of the show was Matias Plaul’s segment, “Song for my Father”, when he told us how the story of his father begins with his death, having been kidnapped by government agents when Matias was only months old. The fear and pain of the story was mirrored in his death-defying dance on the Chinese Pole, both drawing cries from those of us who not only watched but felt him fight and fall. This story exemplified what co-director Sébastien Soldevilla shared as an important component of their art form and their performance when he said, “There is an element of fragility that we don’t shy away from.” 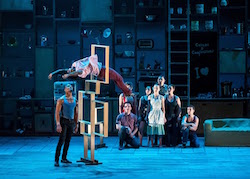 Throughout the show, the performers make you fall in love with them because in the process of performing they show you who they are, and suddenly you know them as well as you know yourself because what you see inside them is the same as what’s inside you.

Go see The 7 Fingers whenever you can. Check the website for when you can next catch Cuisine & Confessions: 7fingers.com/shows/creations/cuisine-confessions.