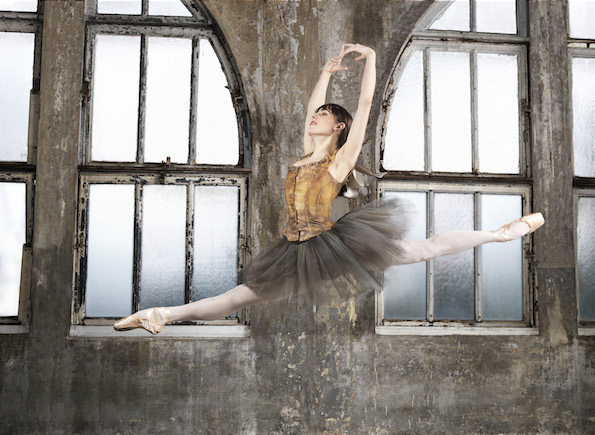 Her stance is a lax fourth position — hands clasped behind her back and chin jutting forward. She is perhaps one of the most famous dancers of all time, but her name and identity is often outshined by the man that made her image eternal.

The dancer is Marie Van Goethem of the Paris Opera Ballet circa the late 1800s. Van Goethem, a corps de ballet dancer at that time, agreed to pose for a Parisian artist by the name of Edgar Degas.

Little Dancer Aged Fourteen is strikingly different from the rest of Degas’ work.  A wax figurine, the sculpture has real human hair and a tulle skirt. She is the only sculpture Degas ever prepared for exhibition and, despite receiving mixed reviews in 1881, she has become one of his seminal pieces.

On Oct. 25, the story of the 14-year-old dancer, whose image helped propel Degas’ career, will unfold through song and dance at the John F. Kennedy Center for the Performing Arts in Washington D.C. during the world premiere of Little Dancer.

Weaving together fact and fiction, the musical follows young Van Goethem as she tries to climb the ranks at the Paris Opera Ballet. She encounters a famous artist, who is also struggling with his career, and, against advice, agrees to pose for him. Van Goethem finds herself torn between her family, her position with the ballet, and the temptations of an affluent Parisian lifestyle at the turn of the century. 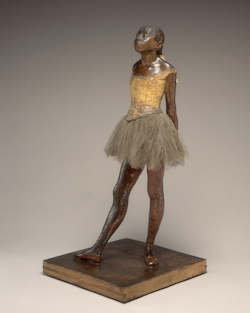 And, the production is stacked with some of Broadway and ballet’s biggest names.

Ahrens says she became fascinated with Degas’ sculpture, specifically the model, and wanted to understand who Van Goethem was.

“I wanted to research the lives of the ‘little rats’ [corps dancers] who danced for the Paris Opera Ballet and the actual life of Marie Van Goethem,” Ahrens says. “This is where I found a powerful story waiting to be told.”

Stroman says she built much of the choreography from the classical ballet vocabulary of Van Goethem’s time, but also wanted to keep the movement relevant to a modern-day audience.

“There are moments in the show when the choreography is about storytelling and takes on a more contemporary look,” Stroman says.

Therefore, the character of Young Marie would require not only strong ballet technique, but the ability to move in and out of different styles.

Peck — who first met Stroman at 11 as Gracie Shinn, the mayor’s daughter, in the Broadway revival of The Music Man — says she learned about Little Dancer four years ago when Stroman was choreographing on NYCB.

“I asked her who was playing the role of the Little Dancer,” Peck says. “She just smiled and said she hadn’t started casting yet.”

A year later, Stroman called Peck and asked her to play Young Marie in the Little Dancer workshop.

Peck says she studied Degas’ many paintings of ballerinas in addition to the sculpture itself — she also dug into Van Goethem’s history.

“Marie undoubtedly had a strong backbone and was a fighter,” Peck says. “Yet, her stance in the statue shows a vulnerability.” 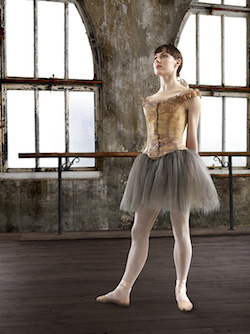 Tiler Peck as the Little Dancer. Photographed by Matt Karas.

While Peck extracted these attributes in Van Goethem, the young dancer actually had a tainted reputation back in her day.

“She was mentioned in Parisian gossip sheets,” says Alison Luchs, who curated a recent Degas exhibition at the National Gallery of Art (NGA) in D.C.

Degas’ Little Dancer Aged Fourteen resides at NGA, and Luchs says Degas using such a model sparked both debate and intrigue around the statue.

“People expected goddesses or heroines from literature and they expected marble or bronze,” Luchs says.

Ballet dancers in Paris at the turn of the century were often kept women and considered working class. But Degas saw beyond that. He was fascinated by ballerinas and “the human form in motion,” Luchs adds.

Costume designers worked closely with NGA staff to create authenticity in the costuming, particularly the rehearsal attire worn by the statute.

With such a star-studded cast and team, there’s some speculation about Little Dancer being Broadway-bound.

“Of course, I always hope any show I direct and choreograph has a chance at another life,” Stroman says.

But Stroman assures those are just murmurs. For now, her priority is the Oct. 25 opening in D.C.