In the professional dance world, we go through various stages in our career in hopes of landing our dream job. We quickly learn that within the hierarchy of dance, we must start from the bottom and eventually climb our way to the top. With the perfect amount of passion and commitment to the art, the eminent result is success. Elizabeth Murphy, Pacific Northwest Ballet’s (PNB) newest principal, is living proof of this theory. 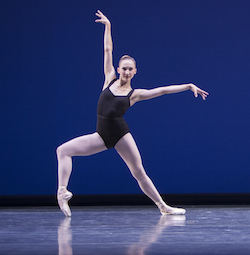 Although Murphy has had the honor of being promoted from soloist to principal with PNB, she shares the challenges that come along with it.

“When you’ve been promoted, there’s always that sense of expectation,” she explains. “There is a pressure to do well, and it’s really easy to be hard on yourself.”

Like many dancers who are in positions that require numerous hours of rehearsal in addition to physical wellness, there are insecurities that rest in the back of her mind that seek resolve. That constant fight inside is what fuels Murphy’s drive to further improve even when she feels like she is at her best.

In regards to adjusting from soloist to principal, Murphy says, “I still feel like I’m finding that comfort zone. It’s such an interesting experience because on the one hand you have someone telling you, ‘Oh, you’re good enough’, but on the other hand you have that insecurity that makes you push to do that much better.”

Through the challenges she faces, Murphy also brings up an ongoing theme relevant to not only herself but also to other professionals: push yourself even further than what you’re comfortable with and allow growth in the process. With this mantra of positivity, Murphy has slowly settled into her new role in PNB. With hours spent rehearsing, along with other responsibilities tacked on, Murphy has found time to dabble in sewing as well, which is another ambition she is equally passionate about.

Murphy’s ambition for sewing started when she was 19 years old. Although she initially started sewing aprons, she sought to find something more meaningful to sew that would be in high demand. The answer clicked immediately for Murphy.

“I thought to myself, ‘I could try sewing a leotard,’” she recalls. 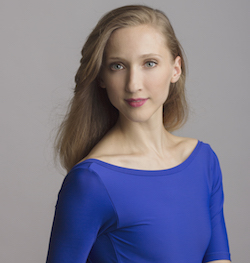 So, with this new endeavor in sewing, Murphy started experimenting with bathing suit patterns. She focused mainly on the design of the leotards she wanted to make. She sought out to make something that she liked aesthetically but that also would keep a balance between flattering and comfortable.

“A lot of times you have to wear the same leotard for three hours at a time, ” Murphy explains, “so finding that balance of form and comfort was what inspired me.”

After mastering the patterns and becoming comfortable with sewing leotards, Murphy found a window of time outside of her busy schedule to bring her vision to life. She spent her summer break sewing leotards upward of 18 hours a day in anticipation of launching her dancewear line.

“I spent the whole summer sewing while trying to stay in shape,” Murphy says with a chuckle. “It was a lot more work than I thought it would be.”

This task of sewing leotards, as time consuming as it was , gave way to a slogan that Murphy lives by to this day: “Love your label.” With this slogan in tow, Label Dancewear was born. After hours spent on making the leotards, designing logos and packaging, Murphy set out to publicize Label Dancewear and watch it take off.

“I knew it was a really good time for this,” she says. “I got the collection ready, had pictures taken of some of my pieces and opened an Instagram account.”

By August of 2015, Murphy opened her Etsy shop with the leotards that she hand-made. Her desire to fill a need for herself and others had finally become a reality, and quickly became popular. With 200 leotards made after the summer, Murphy has managed to replenish her inventory as the demand for her leotards continues to grow. Even so, with her dance season even busier than ever, Murphy still finds challenges in balancing dancing and keeping Label Dancewear going. 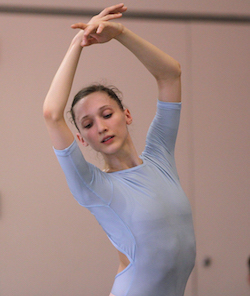 Despite the mental challenge of mustering the energy to work on leotards after dancing all day, the future of Label Dancewear is promising for Murphy. New leotard designs, menswear, warm-ups and skirts are just a few of the many ideas saved in Murphy’s notebook. With these ideas in tow, the main goal for Label Dancewear, according to Murphy, is to ‘make it stand for something good’.

This is where the true meaning behind Label Dancewear stands out most.

“I would love to instill a sense of positivity into the brand with more self-love and compassion that will impact those who wear my leotards,” Murphy explains.

By standing firm with these three simple components that tie her brand together, Murphy hopes to boost the confidence of the dancers who buy her leotards by loving their brand and, most importantly, loving themselves.