Whenever ballet makes its way into mainstream TV and movies, my interest is piqued. How will our industry be represented this time? Will “proper” dancers be used, or will we be cringing at painfully incorrect pointe technique and bad lines? Will there be any truth in the portrayal of the ballet world, or will this be a fairytale depiction painting us all as either super sweet or completely deranged?

In recent years, ballet in movies has been one of two things: a corny, two-dimensional soap opera with predictable characters and paper-thin plot lines; or a surreal, hyper-dramatic fantasy. The prime examples are, respectively, Center Stage and Black Swan. Don’t get me wrong; I love both for what they are. The former is fun, light-hearted and cheesy, and the latter is dark, twisted and full of suspense.

From a dance point of view, what they both got right was the use of “real” choreographers and dancers for their core cast. Actors have to go through all sorts of training to inhabit a role – learning languages, instruments, sword-fighting, horseback riding – but it seems that the one thing nobody can fake or learn to any kind of convincing level in an intensive is classical ballet. (Natalie Portman, who did have a ballet background, did an incredible job in her role, but of course most of the actual dancing in Black Swan was done by company members, which was smart direction.) 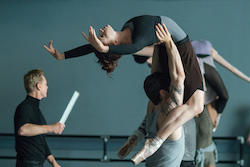 Sascha Radetsky and Sarah Hay in ‘Flesh and Bone’. Photo courtesy of Starz.

While Center Stage was a dancer’s movie, Black Swan was an interesting one, because all of a sudden, it put ballet in the spotlight for non-dancers. For a few years after it came out, it was a regular topic of interest amongst my “normal” associates. “Is it really like in Black Swan?” replaced “Are your feet all gnarly?” as the first question people asked after learning I was a ballet dancer.

As moviegoers, we were enchanted and disturbed by this thriller. And it is just that: a thriller. If you’d watched any of Darren Aronofsky’s previous films, you would have been primed to come away from Black Swan slightly unhinged and resigned to sleeping with the light on for a few days. If you’d been expecting another marshmallow party like Center Stage, well…

As exhilarating as it is, Black Swan is not an accurate representation of ballet company life. Of course, there are many elements of truth, but the level of darkness is intensified in the interest of setting the scene for a tormenting thriller. Sorry to break it to you, non-dancing pals.

And then in 2015, Flesh and Bone comes along. Created by one of the writers of Breaking Bad, you can bet that this single season, eight-episode drama is not going to be some Disney Channel bunhead’s dream realised. Complete with sexual abuse, drugs, full nudity, pole dancing and people-smuggling, Flesh and Bone is very much not for children. 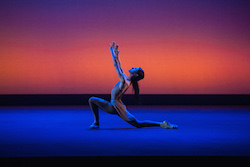 I binge-watched that puppy in two days flat.

After a pilot episode featuring some disappointingly clichéd themes and characters, I decided to suspend all judgement and just enjoy the show for what it was promising to be: a seriously messed-up, graphic, pitch-black drama, that just happened to be set in the ballet world. It delivered. And I loved it.

But it did get me thinking: Why do directors choose to portray ballet as such a grim ride, and why do audiences relish such depictions? We all know ballet is a hard road, but it’s not all megalomaniacal directors and drug-fiend divas moonlighting as strippers.

Is it simply that ballet is a fertile setting for drama? Do we like to poke holes in the idea of perfection? Is it another opportunity to use the word “juxtaposition” in dinner party conversation? Or does it appeal to the fantasy of the girl next door having a secret life as a badass?

“To most, ballet is an unknown world,” says Gerard Van Dyck, director of KAGE Physical Theatre. “Mis-portraying it sits with the confusion and the lack of real knowledge about being a dancer… but also, I think it’s just a good vehicle. The ballet world is good fodder for a high tension thriller story.”

Matthew Dillon of Melbourne City Ballet agrees, saying, “the intrigue of the cloistered ballet world gives rise to the imagination of filmmakers as to what happens behind the scenes,” creating a “deliberately stylised view of ‘artistic obsession’.”

Clare Morehen, principal with Queensland Ballet, believes it’s about creating captivating content, focusing on the more confronting and controversial elements of the dance world in order to draw audiences in. “Watching these pieces would undoubtedly have the outside world questioning how all of us in the industry are still alive and functioning in society,” she says. “With that amount of back-stabbing, verbal abuse, mental illness, sexualisation, drug-taking and eating disorders, we should all be either dead or isolated in an asylum somewhere.” 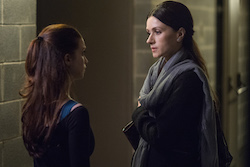 Sarah Hay and Irina Dvorovenko in ‘Flesh and Bone’. Photo courtesy of Starz.

Of course, there is some truth in the picture painted by Flesh and Bone and Black Swan, and many people can relate to the central idea of working hard to pursue a dream in a highly competitive discipline. An interesting aspect of that idea is a side of the story we don’t often see, says Dillon; what happens when the dream-chaser achieves the dream: “Sometimes our dreams aren’t what we hoped they’d be,” he adds, “and that’s the idea driving the main character in Flesh and Bone.”

It probably just comes down to what makes good telly. The clashes of artistic personalities, the impassioned quest for success at all costs, the pursuit of perfection – these are all real-life themes of ballet which can be taken to destructive extremes in the name of bewitching viewing.

And as Morehen points out, it’s maybe much more interesting than the real picture. “The dancers I know; the hardcore training, repetitive rehearsing, sweating, pointe shoe sewing, protein bar eating, ice bucket using, into bed early kind would likely have the audience switching off in droves,” she says.

There are undoubtedly difficulties in the dance world, as there are in any industry. But we wouldn’t be in it if we didn’t love it, and for the most part it’s a wonderful place to be. Sure, you get the odd incident of bitchiness, insecurity or power play, but most artists are friendly, engaging, motivating and supportive. While that’s something to be thankful for, Black Swan would have been an entirely different film if it was based more in reality.

If you haven’t seen Flesh and Bone yet – and you’re over 18 – I recommend it, although I know some people who couldn’t get past the first episode or two due to the graphic sexual content and dark themes. After giggling my way through Center Stage, I was pleasantly surprised at the calibre of writing and performances in Flesh and Bone, even if it is incredibly disturbing. Sarah Hay as Claire Robbins is particularly impressive, and has a remarkably complex character to play. It’s always good to see an artist who is equally strong as an actor and a dancer, and I can’t wait to see what she does next.

If directors continue to paint nightmarish pictures of the ballet world? I’ll still keep watching. And the next time someone asks me, “Is it really like in Black Swan?” I might say yes. Why let the truth get in the way of a good story?