It’s the most wonderful time of the year! Here, Dance Informa speaks with Nicole Pavone, originally from Rochester, NY, about her first national tour for a show based on one of our favorite Christmas comedies, Elf! 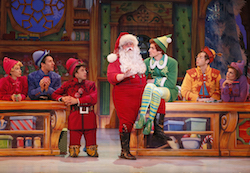 Tell me a bit about your dance background.

“I studied dance at SUNY at Buffalo before joining a contemporary company in Boston called Urbanity Dance. I also taught contemporary, tap and jazz in the Boston area. It wasn’t until 2012 that I moved to New York City and began to audition for musicals. I was lucky to find great teachers at Steps [on Broadway] and Broadway Dance Center, and I continue to study with their faculty when I’m not on the road.”

What was the rehearsal process like for Elf: The Musical?

“We started in October with two weeks of rehearsals in NYC to learn the choreography and the music. We then had a week of technical rehearsal in Boise, Idaho, where we added in the costumes, microphones and the orchestra. In Boise, the show really came together, and after that we were up and running with our first performance.”

Why do you love the show Elf: The Musical?

“Elf is a fun, heartwarming musical that gets me into the Christmas spirit. The comedic aspects taken from the movie always make me laugh, and the musical numbers are entertaining and add a whole new perspective to the story.”

What role do you play in the show?

“I’m the dance captain as well as the female swing. A swing is someone who covers all of the ensemble parts in the show in case one of the performers can’t go on or ‘swings out’. I cover eight different parts in Elf: The Musical, and I’m prepared every night to cover those roles if needed.” 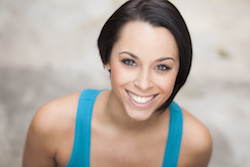 Nicole Pavone, Swing in ‘Elf: The Musical’ On Tour. Photo courtesy of ‘Elf’.

What do you love most about your role?

“Because I cover eight different roles as a swing, I love that I get to play a different character on stage almost every time I go on. I have to be ready to jump in at any moment, which is a lot of work, but it’s also lots of fun. The whole cast is behind me, and the energy changes when a new face comes on the stage.”

What is your favorite number in the show, and why?

“My favorite number is Nobody Cares, when Buddy the Elf goes to a Chinese restaurant and meets a group of fake Santas and a very funny waitress. I love the choreography and the jazzy rhythms of the music. It’s a great opener to the second act of the show.”

What are some challenges with life on the road or on tour?

“Being away from my husband is always a challenge, but thankfully it’s easier to stay in touch with all of the new digital technology. As anyone who has toured before knows, you also have to be an intelligent packer. You have to bring lots of clothing options for all of the different places that you are traveling to, but you also have to keep in mind that you need to easily move your luggage around on a bus or a plane every week.”

What is the best gift you’ve ever been given for Christmas?

“Now that I’m older, being able to spend time with my family and friends is the best gift I can get.” 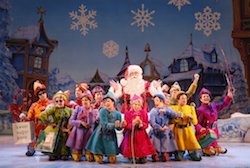 What is your favorite thing about Christmas or the holiday season?

“I’m a big fan of Christmas and the holiday season. Everything from spending time with my family, listening to Christmas music and watching Christmas movies brings back amazing memories. There is so much to love and be thankful for during this time of the year, and I’ve been very fortunate to have so many wonderful people to share that joy with.”

How do you plan to spend Christmas this year?