Dance was the only option for Sarah Hay. She fell in love with the art form very young, and around her eighth birthday, became serious about her training with an acceptance into the elite School of American Ballet in New York City.

Despite a brief “rebel phase” during her teens years, Hay says, “it was always dance. Even after a few discouragements, I decided I would do it whether or not anyone believed in me. It’s been a long journey.”

That journey has taken her to regional ballet companies in the United States, abroad to Semperoper Ballett in Dresden, Germany, and most recently, returning to her home, New York, to film the new Starz network television show Flesh and Bone. The eight-episode series, which premieres November 8, has been described as “unflinchingly exploring the dysfunction and glamour of the ballet world.” (Washington Post) Moira Walley-Beckett, an executive producer and writer for the hit AMC network drama Breaking Bad, created Flesh and Bone. And Hay stars as the fragile, yet determined, Claire Robbins. 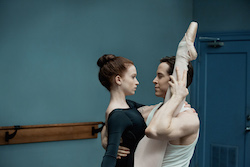 Claire played by Sarah Hay and Ross played by Sascha Radetsky from ‘Flesh and Bone’. Photo courtesy of Starz.

Hay, also a Capezio Athlete, spoke with Dance Informa about the experience and what she’s been up to since wrapping up the series.

Ethan Stiefel, formerly of American Ballet Theatre and Royal New Zealand Ballet, remembered you from ABT’s Jacqueline Kennedy Onassis School. He contacted you to see if you were interested in the lead role in Flesh and Bone – Claire Robbins. The creative team brought you to New York, and after a three-day audition, they offered you the role. What about the show made you want to be a part of it?

“Many different things played a role in me wanting to be a part of the show. First of all, I saw the names listed on the production side of things: people who wrote Breaking Bad, producers from films by Hollywood director Quentin Tarantino, [names associated with the HBO show] Sex and the City, [the Netflix series] House of Cards, and even a producer who was connected with ABT. Also I wanted to try something new and this seemed like a great chance to explore possibilities.”

Claire harbors many demons. Tell me more about her and her complexities.

“Claire is an emotionally wounded, yet strong girl. She grew up in an environment that isn’t what most people would call normal, and as a result, is determined to find normalcy and love. The journey this character takes throughout the show is dark, dysfunctional, sad, and somehow beautiful all at once. Her dreams and fears are very close to each other and she will do anything to get where she wants to be.” 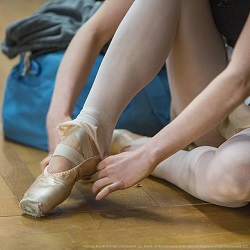 Sarah Hay puts on her Capezio pointe shoes in a scene from ‘Flesh and Bone.’ Photo courtesy of Starz.

What aspect of Claire resonated with you – where you could tap into your own lived experiences?

“Her self-love issues, as she finds her footing and balance. I’ve been through that with different aspects of my life, and I could definitely relate to her insecurities.”

You had no prior acting experiencing before Flesh and Bone. So I imagine there was some learning curves that came with that. But was that the most challenging aspect of this, or was there something else?

“Actually, the dancing was the hardest part for me. Acting somehow came pretty easily. I had a coach in the beginning, and I really enjoyed learning that trade. But when there’s a camera at your side and you’re dancing, it can make you quite nervous about what angle they are shooting and how you look.”

Despite the stereotypes associated with ballet, company dancers sometimes form close relationships and almost function like a family. Did you find a similar camaraderie on set of Flesh and Bone? Do you stay in touch with many of your cast members?

“I love all of the company members I worked with. We definitely formed a family. Unfortunately, I was pretty much working every day and didn’t get [a ton of] free time to spend with them. Many of us keep in touch and still support and love each other. A lot of them continued on to become part of An American in Paris. As far as actors on the show, we talk frequently. I formed lifelong bonds with many of them.” 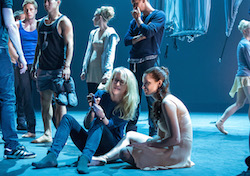 What’s the biggest takeaway from this project, and how will you carry that forward into your next dance or non-dance venture?

“The biggest take away was the boost to my confidence. It has helped me overcome a lot of my fears — fears about what other people think and how I take in the energy of others. I worked so hard on the show that now, somehow, everything else feels a bit less difficult.”

Now that it’s a wrap on filming, what are you working on?

“I am back in Germany, and [recently] premiered George Balanchine’s Theme and Variations. I will also dance Manon [this season]. I am very fortunate that my director, Aaron Watkin, was so open to the idea of letting me go and come back.”

Let’s rewind a bit. Is it correct that someone setting a Forsythe ballet on you suggested you audition abroad — in Europe? How did you decide Germany was the place for you?

“Jodie Gates, [who danced with the Forsythe Ballet in Frankurt, Germany for many years before it folded in 2004], was setting In the Middle Somewhat Elevated on Pennsylvania Ballet, and she liked me. She spoke to me about ‘expanding my horizons’. I started to get curious about what to do next. I wasn’t happy in America, and I wanted more out of my career. I knew the moment I saw Semperoper Ballett on YouTube, this was where I belonged. So I went after it.”

Besides this series, tell me about a few of your favorite roles or memories from your career thus far.

“Dancing in Impressing the Czar by William Forsythe was a great step in my career. Bill actually re-choreographed an entire quintet for me and four boys. It was one of the happiest times in my life. He inspires me to be myself the most. Also dancing Balanchine’s Coppelia was a big step for me.”

You wear Capezio Sylphide pointe shoes, which will be seen in action during Flesh and Bone. What do you like about them?