We all remember sweet, dreamy Charlie from 2000’s classic Center Stage – he won the heart of character Jody Sawyer (as well as the hearts of just about everyone in America…). And now, those sparkling blue eyes, and the actor-dancer behind them, Sascha Radetsky, return to the screen in the upcoming series Flesh and Bone, set to premiere on November 8 on the Starz network. 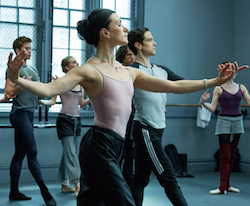 Irina Dvorovenko and Sascha Radetsky in ‘Flesh and Bone’. Photo courtesy of Starz.

Here, Dance Informa catches up with Radetsky to talk about this latest acting endeavor and how he’ll be watching the show himself.

There are high hopes for Flesh and Bone, with a star-studded cast and crew that will be sure to leave viewers – dancers and non-dancers alike – intrigued. The show’s creator is Moira Walley-Beckett, one of the brains behind Breaking Bad, and the team also includes producers Lawrence Bender (Pulp Fiction, Reservoir Dogs), Kevin Brown (Roswell) and John Melfi (Sex and the City). Ethan Stiefel, formerly the artistic director of the Royal New Zealand Ballet (and also from Center Stage), has been Flesh and Bone’s consultant and choreographer. And among the cast are real dancers – Sarah Hay, soloist with Semperoper Ballett Dresden, stars, in addition to Irina Dvorovenko, former American Ballet Theatre (ABT) principal, Radetsky, and many freelance dancers.

That this new show does have such a powerful team was one of the main reasons Radetsky took on the project in the first place. 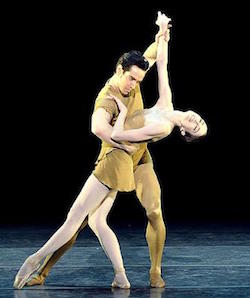 “I was invited to audition,” he explains. “I was hesitant at first, as acting, especially acting in a dance-related show, wasn’t something I ever imagined doing again. But I went ahead and read for my role. With that team in place, the potential was there to make something exciting. The show also seemed like a good vehicle for transitioning out of performing.”

Radetsky, who retired from ABT in July 2014, adds that the show’s use of real dancers and choreographers grounded the show, offering it authenticity. Without them, he says, “it would feel flimsy and fake, two-dimensional.”

In Flesh and Bone, Radetsky plays Ross and says that perhaps the only similarity between himself and his character is that they both care about their work.

“[Ross] is willing to do whatever’s necessary to keep his roles,” Radetsky remarks. “I wasn’t quite so desperate. He can be both a bit of a predator and a victim. Ultimately, I think he’s a decent guy, but like every character in the show, he has his flaws.”

Even after wrapping up a busy final season with ABT, the transition to filming Flesh and Bone was not all fun and games for Radetsky. He explains that the production process and schedule could be equally tiring as a performance career. 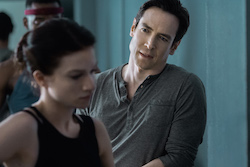 Sarah Hay and Sascha Radetsky in ‘Flesh and Bone’. Photo courtesy of Starz.

“Shooting the dance scenes was toughest,” he adds. “The repetition, the hours, the unpredictability, the slow grind of making television can be grueling for dancers.”

He lays out the differences, too, between preparing for a live performance and dancing for the screen.

“The biggest differences are probably schedule and pace,” Radetsky says. “When rehearsing for a live performance, with a company, say, we know when we’ll start dancing and when we’ll finish, and we can warm up and prepare ourselves to peak, mentally and physically, at a specific hour. A movie or TV shoot’s schedule is always fluid, and workdays can start ridiculously early and last into the wee hours of the night. On set, we might have to perform a dance sequence three times or 30 times.”

That said, however, Radetsky believes he’s a part of an exciting, well-made series.

“I think the show is artfully crafted and at times very funny and exciting,” he says. “I hope both dancer and non-dancer viewers will be entertained, and I hope they’ll all get something out of the dance sequences.” 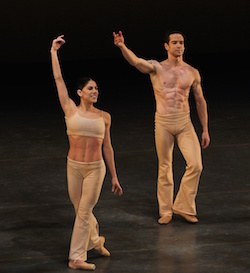 Starz will release all eight episodes of the series at once on November 8. Viewers may choose to “binge watch” Flesh and Bone, or they may watch an episode here and there. We couldn’t help but wonder, how will Radetsky watch himself on screen?

“Stella [Abrera] and I saw the full season last week,” he shares. “We watched an episode or two a night. Soon, Starz will hold an official premiere, and at some point I’ll also have friends over to show them a couple of episodes, share a few beers, and let them make fun of me.”

With this success as an actor-dancer – first Center Stage and now Flesh and Bone – it seems as though acting could be Radetsky’s next career path. But only if he wanted it to be.

“I’d be interested in doing some more acting, especially a Western!” Radetsky says. “But that sort of work is hard to come by. I imagine if I were to succeed as an actor, I would first have to study and immerse myself in the craft completely, and then go out and sell myself. I’m not sure I’m up for all of that. I definitely want to do some writing, teach and coach ballet, and just slow down and enjoy activities and interests I had to put on hold during my dance career. If an acting job comes along, wonderful, but I’m not holding my breath.”

Be sure to tune into Starz on November 8 to follow along Radetsky in the brand new series, Flesh and Bone.