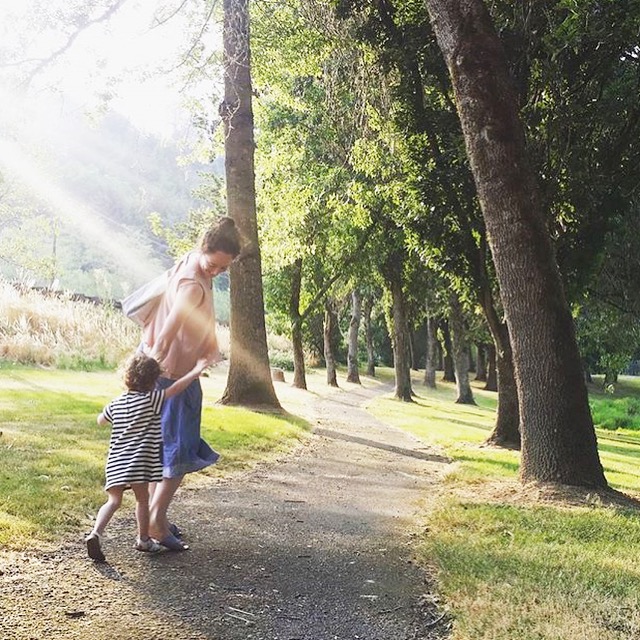 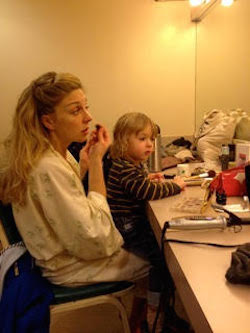 At the time Abby Silva Gavezzoli realized she was pregnant with now four-year-old Marcello, she was touring with Parsons Dance. Her husband, who at the time served as the company’s technical director, was fortunately on the road with her. Gavezzoli continued to perform and tour until she was about six months pregnant. Per her doctor’s orders, she wore a heart rate monitor, and she shifted roles and a few partnering lifts that were uncomfortable.

“The last few weeks of that period, there was the daily question, ‘Would my costume fit me today?’ or ‘Will it pop open during the kid show?’” she recalls. “Some funny-not-so-funny moments. But of course great memories! They still rib me about my shirt popping open on stage for the children!”

For the first two years after Marcello’s birth, Gavezzoli worked very little, which was a big change after having toured with Parsons for 10 years. She did audition and get work as an extra dancer at the Metropolitan Opera when Marcello was six months old, and this part-time work allowed her to both dance and be at home with her son.

“The juggling act is definitely in the scheduling and organizing child care,” Gavezzoli says. “Every week is different, as well as the hours of the day, and then of course when I have a show it makes for a complicated puzzle! When searching for a sitter or nanny, the most important thing is flexibility. You need to find someone you can call and change the schedule or day.”

Gavezzoli says it can be difficult when she goes on tour with Parsons, for example, and doesn’t get to see her son each day.

“For me, this is the hardest thing, but it’s also nice not to be Mama for a few days,” she adds. “Obviously, my husband and Marcello are my first priority, but I can’t express how important and necessary it is for any mama to unplug, refresh and reset!”

Every day is different, but Gavezzoli says this lack of routine can sometimes be the best part and that the lifestyle can, in turn, lead to a very adaptable child.

“The most rewarding aspect is involving Marcello in this lifestyle and exposing him to the many wonderful artists we encounter,” she says. “I love watching him imitate and elaborate on what he is seeing and experiencing, and then talking about it for days later. For him, being in the theater until 11pm is normal and what everyone does. It’s endearing to hear him speak about prospective careers. He knows dancer or sound engineer!” 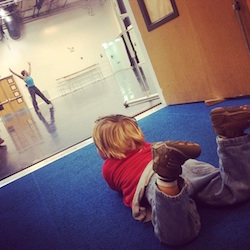 Lynn Peterson, co-founder and artistic director of SYREN Modern Dance, in the studio as her son, Silas, looks on. Photo courtesy of Peterson.

Lynn Peterson, who has a two-and-a-half year old son, Silas, and is expecting another young one any day, has figured out, whether coincidental or not, a schedule and timing that works for her during her pregnancies. She rehearsed and performed until the beginning of her second trimester, and she continued to teach through her sixth month of each pregnancy.

“Everyone is different,” Peterson explains. “To perform later in pregnancy would have required me to not be true to what my body needs while growing a baby, and I welcomed the opportunity to be aware of my body needing a drastically different focus than what I was accustomed to.”

Both giving birth and raising a child have provided Peterson a deeper realization of all that her body is capable of doing. With that, she says it was a joy to return to her dancing body after Silas was born.

“I was amazed at how different I felt,” she says. “Amazed at this new perspective of understanding what my body can do and by the sense of grounding that seemed to exist after getting to tap into the inspiring ritual of giving birth.”

“The hardest thing for me about being a mother and a dancer is perhaps what any working parent may experience in trying to juggle all the logistics and finances of child care and career,” Peterson says. “It is an endless jigsaw puzzle.”

Silas often joins his mother in rehearsals and teaching hours, and Peterson says she loves that her job allows the space for her son to be a part of it all.

“I am grateful that he will have a deep understanding from the very beginning of what it is I do,” she comments. “He has also been present for a few of my performances, as well as those of my students or friends, and I also love sharing these experiences in the theater with him.”

Nicole Wolcott in the studio with her daughter, Laurel. Photo courtesy of Wolcott.

By the time Nicole Wolcott was pregnant with daughter Laurel, now three-and-a-half years old, she was working less as a performer and focusing more on choreographing and teaching. As a result, she was able to work throughout her pregnancy and avoid any movements that were not possible or safe. She was working on the revival of Rent on Off-Broadway when she was first pregnant and says she felt fine climbing around the set of fire escapes and platforms. Wolcott even performed in a benefit concert during her eighth month, with mirrors glued to her belly, resembling a disco ball, to “Rich Man’s Frug” from Sweet Charity.

For Wolcott, part of finding the balance came with managing child care. She had, at one time, for example, lived in a hotel in Washington, D.C., for six weeks with a nanny so she could work on a Broadway show. At another point, she did a child care share between three different care providers, three kids and two mothers’ varying schedules.

Wolcott notes that time and money became barriers to work through and that she had to be efficient to be able to plan classes, choreograph and do administrative work.

“But I believe any dancer who has made it to the level of actually being a professional in the field has enough scrappiness and ingenuity to figure out these details as they come,” she says. “Basically, you are responsible for two people at all times, and that other person can’t do anything for themselves.”

“The harder part of the equation of being a mother and a dancer is being a mother,” Wolcott says. “Any mom will tell you that. The challenge motherhood places on being a dancer, if one thinks in terms of the moving body, is staying in shape and getting to practice my art form on a regular basis.”

All difficulties aside, however, Wolcott says that the greatest treasure is simply doing both – being a mother and a dancer.

“Yes, life is more challenging,” Wolcott adds,” but no one can really convey the amazing experience of having a child. In practical terms, you need to figure out your time/money algorithm with your partner. Both of you need to be on board with the breakdown. I have been so blessed that my husband supports what I do even though there seems to be a low ceiling to what I can earn and the scheduling makes our life crazy.” 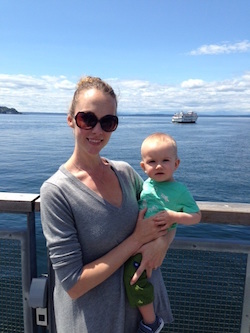 Kylee Kitchens found out she was pregnant at the beginning of Pacific Northwest Ballet (PNB)’s 2013 run of The Nutcracker. With her doctor’s approval, she went on to complete the run, even tackling some difficult roles such as Clara and the lead in “Waltz of the Flowers”.

“Other than feeling fatigued, I remember loving that I was carrying my son while being on stage,” Kitchens says. “It was, at that time, this beautiful little secret. I performed until I was 14 weeks pregnant and continued to take class until my due date. It felt good to move my body in a familiar way, and it made me feel strong throughout my pregnancy.”

Kitchens, who lives 30 minutes away from where she works with PNB each day, says one obstacle is scheduling a nanny around her ever-changing rehearsal schedule and also checking in to make sure everything at home is okay with her one-year-old son, Simon. She does, however, try to make time to rush home during a long break if it means she gets to spend time with her little one.

She also sees this balance of mother and dancer as a positive example to set for her son.

“I want Simon to see that I was able to live my dream of being a dancer and that he, too, can reach his goals with hard work and dedication,” Kitchens says.

“I’m saying this because I am currently in the thick of it, but for me, the hardest part of being a mother and a dancer is the lack of sleep,” Kitchens explains. “Some days, I wake up and wonder how I’m going to make it through my rehearsals when my son had been up every two hours. There were some difficult days.”

Kitchens is grateful for being able to have two things in her life that bring her immense joy. “Ballet careers don’t last forever, and I want to soak in the time I do have both,” she says.

If you missed Part One of this series, check it out here.