If you’re a dancer, then you know that it takes a lot of discipline, sacrifice and time to devote yourself to the art form. If you’re a mother, then you’d probably say that it takes a lot of patience, sacrifice and sometimes a lack of sleep to devote yourself to another little being. For those who are dancers and mothers, all of those skills must come into play, creating a role that becomes almost otherworldly. Both dancing and motherhood are full-time jobs, but many women have found a way to do both and keep balanced. Here, Dance Informa celebrates those moms who dance – those “supermoms”. 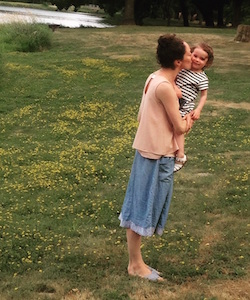 Since Sarah Ricard Orza gave birth to her now two-year-old daughter, Lola, three other dancers at PNB have become mothers as well. The company offers a clear maternal policy through the dancers’ AGMA union agreement, and this community of mothers also offers as a support system.

Orza continued to dance rigorously until she was about three months pregnant, after which she took class and performed as Frau Staulbaum in The Nutcracker.

After Lola’s birth, most of Orza’s physical and mental energy went into her daughter and less into getting back into “ballet shape”. But after just four months, Orza was back on stage performing Twyla Tharp’s Nine Sinatra Songs.

“[Lola] was still nursing frequently, and needless to say I was exhausted,” she comments. “It was also emotionally hard leaving her to go to my daily class, rehearsals and performances. I exclusively breastfed her and pumped and supplemented with bottles of breast milk, so that was an additional challenge I took on when returning to work.”

Orza says the most difficult hurdle was returning to her high caliber of dancing.

“I have never incurred a serious injury and had little experience working myself back into shape,” she explains. “Dancing always came naturally to me. In general, my body could do what I told it to. Not so after I had Lola! My muscles had atrophied with the absence of training, and lactation hormones made my body just feel ‘noodily’. It took me much longer than I had anticipated returning to a condition that I viewed as ‘normal’.”

Orza admits that the dual role of mother and dancer is not easy but that it can offer such rich rewards. In addition, she gets to share her passion with her daughter.

“I am very proud of the work I did to both return to the stage and keep my daughter healthy and thriving,” she says. “Today, Lola loves to turn on music and dance. She twirls, does the ‘splits’ and has a killer arabesque. Whether it is her professional calling or not is yet to be seen, but I love that she can come to my work and see me dancing and find joy in it, too!” 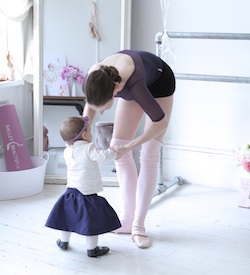 Professional ballerina Mary Helen Bowers, who danced with New York City Ballet for a decade, was at the forefront of the ballet-inspired fitness boom when she trained actress Natalie Portman for her award-winning role as a ballet star in the film Black Swan. Bowers continues to train a long list of celebrities and also offers online classes, DVDs and streaming videos. Most recent in her ballet fitness business is Ballet Baby, a series of pre- and post-natal workouts inspired by her own drive to keep fit while pregnant. Today, Bowers is also known for her ballet photographs both as a pregnant dancer and as a ballerina with her little one. Those photographs can be seen regularly on Bowers’ Instagram page, @balletbeautiful.

“For most dancers, dancing and being a dancer is a core part of our identity,” Bowers says. “It’s how we understand and perceive ourselves and the world. Motherhood is very similar in that respect. It’s an immutable part of who you are.”

Bowers says that, for her, challenges have been mainly balancing fatigue with a busy schedule as a business owner and also time (or lack thereof!). She does add, however, that she’s grateful to have a schedule that is flexible and allows room for work and baby.

“Time is just so precious, and there seems to be less of it than before!” she says. “You simply cannot do it all. I work a lot, and I spend a lot of time with my daughter. It’s all a question of personal priorities and what you need to put first for your family.”

Bowers says that merging both her passions for dance and her business with becoming a mother has been incredibly exciting and rewarding.

“The most rewarding part is spending time with my daughter and knowing that I am building a company and a movement to share the artistry and athleticism of ballet with so many around the world,” she adds. 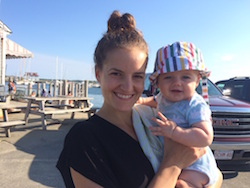 Dancer Jordan Risdon with her son, Warren, before a performance at The Yard, Martha’s Vineyard. Photo courtesy of Risdon.

Freelance dancer Jordan Risdon certainly keeps herself busy – not only is she a new mother to son Warren, seven months old, but she also currently works with Steeledance, Jessica Gaynor Dance, Cori Marquis + the Nines [IX] and Donnell Oakley Makes Dances. She says she was able to take class throughout her entire pregnancy and even rehearse and perform for the first 20 weeks. For the second half of her pregnancy, Risdon took the extra time to do what she calls “pregnant lady things” – naps, long walks with her dog and pre-natal massages.

“Even though I made the choice to step back for a few months, it was still very hard to see my friends and colleagues rehearsing and performing without me,” she says. “It’s total ‘fear-of-missing-out’ no matter how level-headed you are about it and no matter how short a time you take leave.”

Now that Risdon is a mother, she’s back to taking class, rehearsing and performing.

“Juggling motherhood and being a dancer is sometimes wild and sometimes no big deal,” Risdon explains. “It depends on the week. Most of the time, I think I have found a really great balance of dance commitments and mom commitments. Only when it’s a performance week, or I’m out of town performing, do I question how much juggling I am actually able to sustain. Often the fatigue and insecurity is associated with logistics of nursing and pumping and whether or not Warren’s caretakers are ‘doing it right’. But at the end of the day, Warren is going to be absolutely fine if he skips the occasional nap, and if I have to stay up extra late to clean a day’s worth of pump parts, so be it. In these trying moments, I remind myself that being able to dance and have this rich life is totally worth it.”

Risdon says her hardest challenge is the logistics – if a nanny or her husband is scheduled to take care of Warren, if there is enough milk, if Risdon has remembered everything for her day, that the subways run on time and everything goes according to plan.

“The first few weeks I was back in rehearsal, I would forget something every day,” she recalls. “Literally, every day. Early on, I was performing, forgot a piece to my pump and got totally freaked out that I would leak milk through my costume. I ended up being just fine, albeit a little unfocused.”

“The most rewarding part is obviously having both dreams come true – to have a beautiful baby boy and to have a rewarding career,” Risdon says. “I don’t for a second take for granted how fortunate I am.”