Mid-February, the Chicago Human Rhythm Project once again presents it Winter Tap JAMboree at Chicago’s own American Rhythm Center.  You better hightail it to the windy city if you want to take part in a weekend of hardcore classes with tap masters like its director Lane Alexander, Cartier Williams, and Nicholas Young.  In addition to an impressive line up of classes, the weekend also offers a panel discussion, daily tap jams, and the opportunity to audition for scholarships including a coveted spot at Nicholas Young’s Institute for the Rhythmic Arts (IFTRA) during Chicago Human Rhythm Project’s three week Rhythm World summer tap festival.

The Chicago Human Rhythm Project (CHRP) itself started out as a festival co-founded by tappers Lane Alexander and Kelly Michaels in 1990.  In that very first year, proceeds went to charities, 52 students attended classes, and more than 200 people filled the audience. Ten years later, Lane Alexander went into a strategic planning process with his local community, board, artists, and friends to discuss the future of CHRP and the conclusion was that just doing a summer festival wasn’t enough.  It wasn’t enough for the company to grow and to be stable, and it also wasn’t enough when a very important part of their mission was to reach out to youth all over Chicago.  What resulted was the decision to create more programming at more venues throughout the city to reach all of Chicago, and in 2002 it resulted in the Winter Tap JAMboree.

Twenty five years later, CHRP continues to present the oldest annual tap festival in the world, presents tap and percussive dance year-round, and works with venues of all sizes to offer residencies, workshops, concerts, outreach programs, and hundreds of thousands in scholarships.

From the start, “the focus was on youth and youth scholarship,” explains Lane.  Because the festival has grown to reach out to every community, offering master classes with truly world-class teachers, many of whom are local to Chicago, and can offer this at a truly affordable price, teens and young adults can learn from the greats when they might not otherwise be able to afford an education like this elsewhere.

Some students do fly in from other states, Canada, Mexico and occasionally more distant countries but the bulk of the student body each year is the native young tappers in Chicago.  “Where as most summer festivals try to pull in an international student base, the Tap JAMboree focuses on the local community in Chicago which is incredibly valuable,” shares celebrated tapper Michelle Dorrance, who has taught at the JAMboree and will be teaching as part of IFTRA at CHRP’s festival this summer.  “There are so many different levels of students growing at a tremendous rate and there is a great range in style and approach throughout the city. It was so exciting to be able to teach and interact with these different students from different walks of life, different neighborhoods, and different rhythmic sensibilities all inside of the same classroom.”

Tap star and one of this year’s JAMboree instructors Cartier Williams shares the sentiment about what is happening locally.  “Future is the key word here,” explains Cartier.  “What’s happening in Chicago is the future foundation for where tap is headed. The variety of teachers and programming that you will see in a matter of a week or weekend is essential to any person [who is] interested in percussive rhythm or tap.”

A major focus of the festival and integral component to CHRP’s emphasis on scholarship is the IFTRA audition and summer opportunity.  IFTRA director Nicholas Young was heavily influenced by the choreographers and percussionists he worked with while developing as a multifaceted performer in Texas, but his ideas for IFTRA and the curriculum he envisioned for it emerged during his time performing with STOMP.  “When I began playing the lead roll of Sarge, I was put in the position of creating an “opener” for the body percussion piece “hands and feet,”… This was when I really started to dive in and find structure to my approach whilst also being greatly influenced by the vocabulary of other STOMPERS and body percussionists around the world. This is when I also met my dear friend and Associate Director of IFTRA John Angeles.”

His dream of “cross training” tap dancers with other rhythmic forms grew, and because he has known Lane Alexander for years, first as a student and then as a fellow performer and teacher, he was able to share his ideas with the man who would help his dream become a reality.  “I got the call and Lane offered the amazing opportunity for CHRP to host and present IFTRA as a three week emerging professionals program. As you can imagine, I was elated! … having the support of Lane Alexander and CHRP would give IFTRA the platform and momentum it needed to become fully realized as a comprehensive and immersive program.” 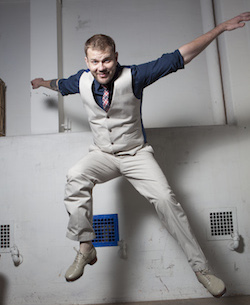 Students who audition for IFTRA at the JAMboree are in for a treat.  The audition alone will include tap, rudimentary rhythm techniques, body percussion that requires auditionees to apply basic music theory, a combination, and improvisation where they get to show off their own style and approach.  Those who are accepted into the summer program will not only take hours of challenging tap technique, improv, and choreography classes with teachers like Lane, Nicholas, Michelle, John Angeles, Doug Feig, Jumanne Taylor, and local master teachers, they will also learn rudimentary drumming and theory including reading and notation, hand drum and percussion, body percussion, and music discovery.  IFTRA doesn’t try to blend tap with other percussion.  It teaches both and allows the student to create his or her own percussive style.

Of course, all of this leads to one of the most rewarding things for Lane to have experienced over these past 12 years of the winter festival, the outcome of student scholarship, which is actually the cumulation of a million little things he sees when young dancers cultivate an education as they grow into adulthood.  “Seeing them go through the program, becoming adults, becoming teachers, becoming professionals…tap doesn’t have an academic framework, so handing off the torch from one generation to the next is a lot less formal, but it is amazing to see it change the trajectory of someone’s life regardless if they stay a dancer or stay involved in some other way.”

And, the other tappers agree about the impact.  If Lane hadn’t taught Nicholas and later shared time with him backstage, IFTRA would not be where it is today creating opportunities for students in NYC and Chicago.  Cartier didn’t take a lot of master classes when he was growing up, but he did make it a priority to study ‘with the legends’. “I was taught all the essential fundamentals you need as a hoofer. I was able to learn from these experiences and bring them to the master classes I teach.”  And, Michelle extolls festivals like the JAMboree, “[they] changed my life!! We students were able to study in the classroom with the community’s best dancers and professionals and then spend quality time with our elders and masters of the form (before they passed) every single day.”

Find out more about the Winter Tap JAMboree and IFTRA auditions on the Chicago Human Rhythm Project website here.