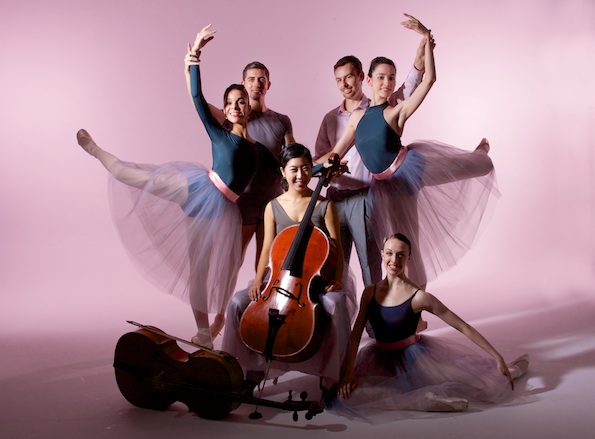 “The process itself is always fun and non-judgmental. We do the concerts simply because we enjoy them and we enjoy each other… Working with people I am so close to has been an experience unlike anything else I’ve had with other companies,” shares dancer Dona Wiley of her experiences with CelloPointe.  It’s always wonderful to hear when company members truly enjoy working with each other and it’s even better when they form close relationships, but in this unique company most of the performers couldn’t have become much closer than they already were – some of them are related.

CelloPointe, founded in 2010, boasts the collaboration of the Wiley family: Peter, Marcia, David and Dona. Siblings David (cellist) and Dona (dancer, former cellist) perform with their father Peter (Grammy award-winning cellist) while mother Marcia (also a cellist) takes on a managerial role. The whole family grew up playing cello together in the home and at student recitals. When Dona turned her focus to dance, the family continued to play for some of her shows and at the studio. 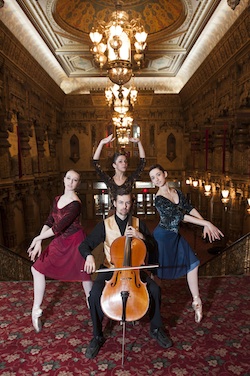 “The two passions in our family are music and dance,” says Marcia, the dance aspect going all the way back to Peter’s time as a student at the Curtis Institute of Music, when he played cello for the Pennsylvania Ballet. Since then, their work together has evolved into accomplished professional performances.

It isn’t always easy working with your family, let alone growing up with them! “Dona and I probably bickered and fought as much as any other siblings growing up.” But, David says, working with his sister has shed light on the hard work that dancers go through to produce something worth seeing. “I’ve always seen Dona’s dance career from the outside looking in. CelloPointe, however, let me see … how much work and how many hours they put into these elaborately choreographed works. Seeing her in this aspect of CelloPointe makes me respect her as a dancer and an artist.” And now, the siblings are best friends.

CelloPointe is more than a collaboration between the Wileys, it is an extended family of musicians and dancers all coming together to make something special. “Being a part of CelloPointe is truly a dancer’s dream,” shares one of CelloPointe’s beautiful dancers Kate Loh. “We are a very small, tight knit company and the collaborative nature of the company is incredibly fulfilling.”

Since 2012, Kate has had the opportunity to work with choreographers such as Deborah Wingert, Gabrielle Lamb and Emery LeCrone, each of whom brings a unique perspective to their choreography with a ballet foundation. Peter and Marcia found it interesting that this year Wingert, the most classical of the choreographers, ended up choosing a very modern piece of music by George Crumb, while Lamb, she with the most modern background, chose Vivaldi. Such variety has always been a part of their programming, which aims to attract both music and dance audiences. 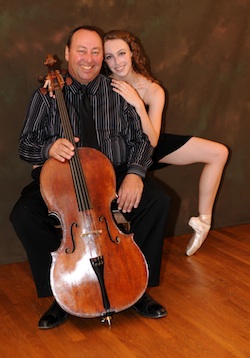 Among the group of highly acclaimed emerging guest choreographers working with the company this season is Marcos Vedoveto. As an emerging choreographer, he has created new works for the Latin Choreographers Festival (NYC), Dance Theatre of San Francisco and Connecticut Ballet, among others, for which he blends classical and contemporary themes. While at Connecticut Ballet, Marcos met Dona as well as CelloPointe dancers Claire Mazza and Morgan Stinnett, a connection that would bring about the creation of a new work. “I am choreographing a piece about the three graces, not really telling the story about them but of a frustrated painter who has no inspiration to paint anymore.” And, yet somehow the artist ends up painting the three muses, which seems fitting for a company in which the artists are inspiring the art in each other.

Everyone involved in CelloPointe is quick to point out that everyone is an equal collaborator: dancers, musicians and choreographers. Marcia and Peter “like the idea of CelloPointe as a dual venture where music and dance are equally balanced,” and they aim for true artistic collaboration. “It’s the type of project where the musician’s interpretation of a piece can be just as important as the choreographer’s,” adds Dona. “The performance side of it can be pretty emotional. The work ends up being so personal when it’s been created with your family, and I definitely draw from the struggles and the joys that come with that while I’m performing.”

CelloPointe just performed at the Ailey CitiGroup Theater in New York City on March 2, and are now preparing to perform at the Chamber Music Northwest Festival in Portland, Oregon on July 4, 5 and 6, 2014. For more information, visit cellopointe.com.