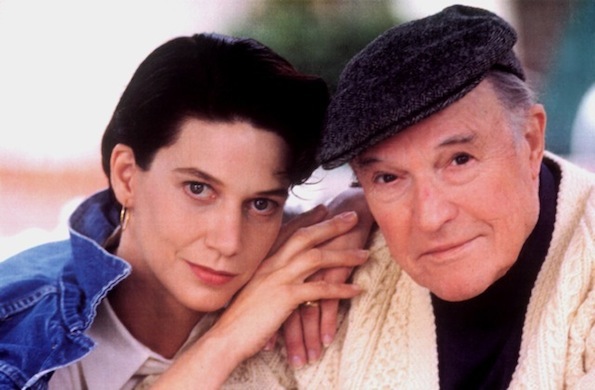 He sang in the rain, was an American in Paris and made a night on the town last for an eternity. Gene Kelly was and still is a legendary presence in both the dance industry and mainstream culture. His elegance on the dance floor and charisma on the screen inspired dancers across the country and brought smiles to countless faces. Yet, he was so much more than a tap dancer with a knack for Hollywood.

Biographer and film historian Patricia Kelly says she fell in love with the man; not for his impressive notoriety, but for his ambitious nature, love for words and infectious passion for his craft. In her one-woman show, Gene Kelly THE LEGACY: An Evening with Patricia Ward Kelly, she brings audience members into the inner workings of her late husband, creating a personal, interactive experience that ignites the imagination and pays tribute to one of the finest in American entertainment.

Meeting and remembering an American icon

Gene Kelly’s presence may have permeated old Hollywood, but Patricia Kelly says she didn’t grow up with his movies and confesses she had no knowledge of his stardom upon their first meeting—he wanted to speak with her about writing his memoir. Yet, she feels her unfamiliarity gave her an advantage. 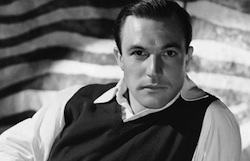 “I knew nothing, so I didn’t come with any preconceived notions of him or his work,” she says, laughing as she reflects back. She says she took it upon herself to learn about the American songbook, various styles of dance, the use of the camera and Technicolor, “a complete education.”

While she didn’t swoon like many do, Patricia Kelly confesses she “became enchanted very quickly because of his use of the language.” Remarking on his “wonderful blend of a erudite gentlemen and a Pittsburgh street kid,” she comments fondly about his use of languages, extensive knowledge of literature, history and art. “You just kind of sat there and absorbed; it was like an education, a college of one,” says Patricia Kelly—she spent 10 years documenting his life with notations and recordings.

Patricia Kelly suspects part of the reason he chose her to write his memoir is because she came from a very academic, research-driven background; she believes he was drawn to that because “it reflected his own [ideas], as he was very a bookish guy.” 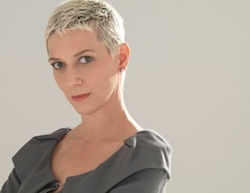 Patricia Kelly says she realized there were gaps in people’s general knowledge about who he was as an artist and individual, so she began to brainstorm about the best way to expose the real Gene Kelly to a 21st-Century audience.

“It was his 100th birthday [in 2012]. I knew people were going to celebrate him in some way,” she says. “I wanted to create a show where he could actually be represented in the way he wished to be represented.” She adds that he ultimately wanted to be remembered as a creator more so than as a performer, “the guy behind the camera rather than the guy in front of the camera.”

“He wanted to be known for changing the look of dance on film. I thought, if anyone is going to be the one to get the word out, I would be the one to do it,” she says. “I crafted the show around that concept and launched it for his centennial.” 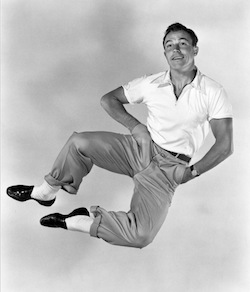 Patricia Kelly describes Gene Kelly The Legacy: An Evening with Patricia Ward Kelly as a conversation that centers on the concept of storytelling and takes the audience into the intricacies of his life. Performed without an intermission, the evening walks viewers through his life until the end, and then explores the aftermath—“a continuation of the legacy” she calls it. Using the tales he shared with her, she creates an intimate introspective at what inspired him.

Throughout the evening, she employs various items that belonged to him and held particular significance. She also weaves in video and rare audio, including sound bites of Gene Kelly singing to her at night. “He would often use a song lyric to convey something he was feeling or experiencing, so it’s very potent to hear his voice,” she says.

While there is a through-line connecting the clips and narrative, the show changes every night, shaped by the varying audiences and settings. This adaptability makes the show more alive and versatile, according to Patricia Kelly; in the midst of a national and global tour, she enjoys this shifting nature.

Before and after every show, Patricia Kelly makes herself available to the audience, inviting them to ask questions about the versatile entertainer. 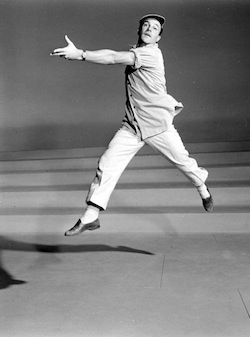 “The predominant comment as people leave the set is ‘I loved him, but I never knew that about him.’ So, it’s been really fun to share the multiple dimensions of the man,” she says. “People see him up on the screen and they appreciate that, but they have little or no idea how he created things, why he created them.” These comments further fuel the memoir, so the two projects work nicely in tandem.

Beyond reliving his art, Patricia Kelly hopes to pass on her late husband’s aspirations for the next generation of dancers to not simply duplicate what he did, but to take it to the next level. Based on the gratifying and warm reception of the dance community, it appears the show is fulfilling its mission. “It’s amazing,” she says. “He’s been gone almost 18 years—he died in 1996—and yet he still inspires so many young people.”

A master of his time whose body of work remains potent, Patricia Kelly says his contributions in front and behind the camera continue to touch dancers of all genres and generations. She is thrilled to share his stories and dreams through the show and, though a publishing date has yet to be set, looks forward to building on his legacy through his memoir.

For more information or to request the show in your city, visit GeneKelly.org or the Gene Kelly THE LEGACY Facebook page.