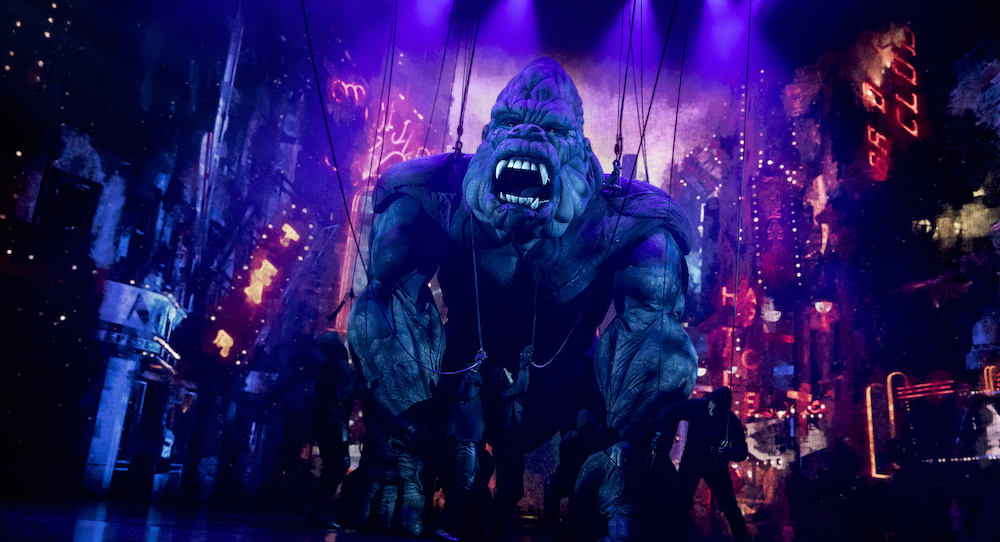 The job of a critic is just as much an art as the work he’s reviewing. His responsibility is to offer an assessment of a performance, film or piece of art. Because a critique is a sort of evaluation of a work of art, some might say that there is a fine line between being critical and being cruel. However thick you draw that line, The New York Times crossed it in its recent review of Broadway’s King Kong. Rather than consider the production’s highlights and acknowledge its shortcomings, The Times swiftly strike the show down. 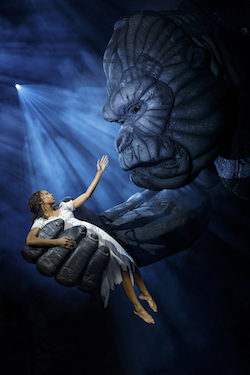 I vow, as a critic, to support the arts. That doesn’t mean a standing ovation or glorious review for every show I see. I will research, question, explore, invite, honor, examine and prompt with the goal of making audiences more engaged, creative teams more reflective and producers more responsive to the potential of the performing arts. We can all work together to keep the arts growing and flourishing.  There is no need for damnation — especially from our own community — in a world where the arts are already besieged.

Now, off my soap box and on to my review of King Kong. You might be surprised to hear that the production truly knocked me off my feet. Now, the story is known (or, at least, easy to predict), characters aren’t developed to their full potential, and loose ends are left lingering as the curtain comes down. While the music is driving and powerful, I’d only consider hearing a ballad or two again in the future. The score worked but does not have me anxiously awaiting the cast album.

The sets and special effects, however, are nothing short of spectacular. The massive Broadway Theatre is the perfect ecosystem for the production majesty that is King Kong. Cityscapes, jungle forests and rippling seas are projected on to a huge scrim. Waves rise and fall as the ship journeys across the ocean (a triangle upstage becomes raked to further depict the bow of boat), cavernous rocks and huge trees flash by as the gorilla stampedes through Skull Island, and we travel up the city to the clouds when Kong climbs the Empire State Building. 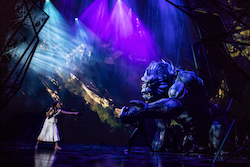 Kong, a massive animatronic marionette weighing 2,000 pounds and standing 20 feet tall, breathes, blinks, moves and roars with the help of engineering and a team of ninja-like puppeteers. (For more about the engineering of Kong, click here.) In my review, I will absolutely consider the puppeteering work as part of the “dance.” The puppet engineers (called “Voodoo Engineers”) are masterfully choreographed to make the gorilla come to life — he runs, blinks, climbs, smells, grabs, fights and pounds his chest with a mighty roar as the Voodoo Engineers crawl, slide, leap and suspend from wires and the puppet himself. If you are upset with the visible wires and human engineering of the giant monkey, you’re welcome to walk 10 blocks downtown to the nearest movie theatre. This King Kong is not a feature film and also not an attraction that belongs at Universal Studios; it is performance art. Kong is so much more than a puppet or a robot — human artists work as a choreographed team to make the creature come alive. I’d actually encourage audiences to notice the ninja-like monkey movers and choreographed harnessing that manipulates the enormous puppet. I can only imagine how long and intricate the show’s tech process must have been to make the scenes so seamless and strong. It’s truly spectacular.

The human ensemble dancing is like living scenery, in a good way. The ensemble leaps, lifts, spins, throws, tumbles and undulates to the chanting rhythm of the score. They embody the grind of the city as they — all together — fall to their knees, slide across the stage, rise back up and then disperse into uniquely choreographed pairs. Women perform movement just as athletic, grounded and strong as the men. And partnering is not determined by sex; men lift men and women support one another in the physically demanding movement. This, in effect, takes any sort of romantic or hierarchical narrative out of the choreography. Your eyes dart as the ensemble dances in ever-changing trios and groupings until they come together as one. Suddenly, all movement stops. The company slowly lowers one knee to the ground as their chins lift and eyes raise to the skyscrapers mounting around them. The ensemble is “one” — one city, one struggle, one identity. 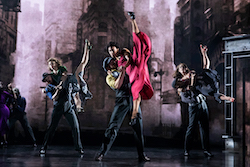 The Company of ‘King Kong’. Photo by Matthew Murphy.

Besides moments of “show-within-a-show” choreography (i.e. showgirls rehearsing backstage and male dancers portraying sailors in the utmost musical theater fashion), the dancing is not restricted to movement or archetypes from the 1930s. The dancers are not just decoration to set the scene for the principal actors. They speak through their body. You feel the weight, struggle, grime, sweat and desire of the city. Yet at the same time, by isolating their chest, swinging their arms and leaping forward from two feet to one, the dancers appear animalistic…alluding perhaps to the similarities between humans and apes — that we are actually not so different from this “beast,” King Kong.

You might be surprised to learn that this larger-than-life production was headed by a Broadway newbie. Britain-based Drew McOnie both directed and choreographed the production — a feat that unifies the dancing with the arc of the show. His choreography is vigorous and full-bodied. This is probably the most athletic ensemble of dancers I’ve seen since the recent revival of On the Town. There was always a lot going on. I found myself sometimes not knowing at which group of dancers to look because everyone was doing something entirely different and entirely interesting. I wished for more moments of stillness when I could digest what had just happened. Those quiet moments aren’t frequent in the show, but when they do appear, they’re incredibly powerful. 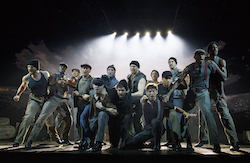 I would love to see King Kong again for the very reasons other critics dismissed the show. I want to focus my attention on different groups of ensemble dancing, watch the Voodoo Engineers masterfully puppeteer the giant gorilla. It’s easy for Kong and the other special effects to upstage the live performers, or so it seems. Because without the human actors, those spectacles would be mute.

A review should not tell the reader how to think. A review itself should never ruin a show. The critic should ask questions, provide comparisons and provide feedback to give the audience tools to better experience a production and give future creative teams guidance (or, at least, consideration) in developing new projects. We’ve come to find ourselves in an age when a critic can dictate the fate of a show. If I were you, I’d take the power back. Whether you decide to see King Kong or not, be wary of what you choose to listen to. There’s enough hate in our country as it is. Let’s leave it out of the Arts section.