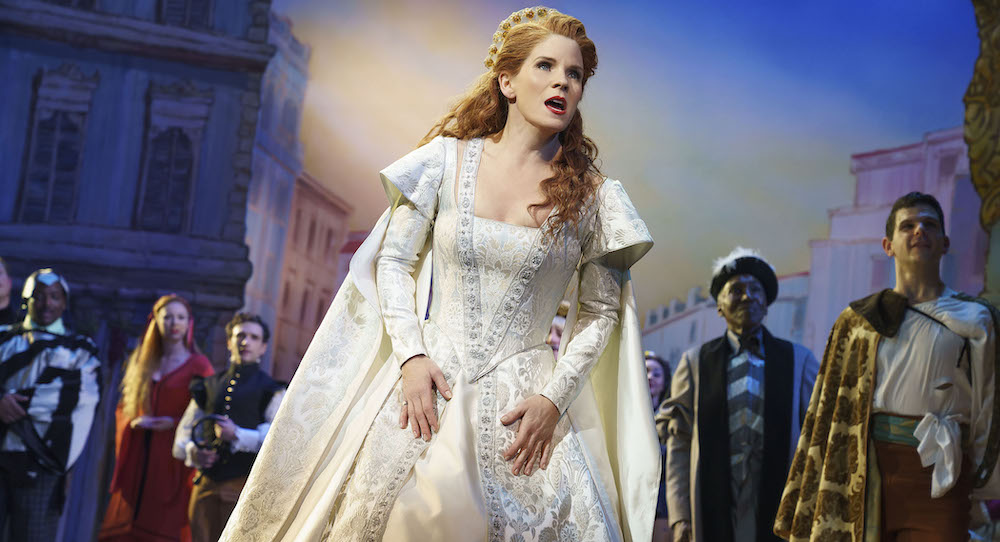 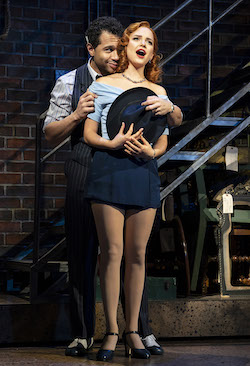 Corbin Bleu and Stephanie Styles in ‘Kiss Me, Kate’. Photo by Joan Marcus.

Was Kiss Me, Kate a revival we needed to bring back to Broadway in 2019? Maybe not. If you’re unfamiliar with the musical (which originally opened on Broadway in 1948), we’ve got a “show within a show” situation where the drama off stage naturally gets entangled with the actors’ performances on stage. This musical comedy, with all the puzzle pieces of a Broadway hit (including a fantastic, story-telling score by Cole Porter), won the first ever Tony Award for Best Musical. However, even with some adjustments allowed to make the show a bit more digestible for modern day audiences, the misogyny is still both undeniable and…icky.

That aside, the talent in Roundabout Theatre Company’s revival production is out of this world. Kelli O’Hara’s sassiness and brassiness are perfectly bold and hilarious in the title role (Lilli Vanessi/Katharine). Her counterpart, Will Chase (Fred Graham/Petruchio), is equally comical and charming, although the chemistry between the pair just doesn’t find a spark. Corbin Bleu (Bill Calhoun/Lucentio) proves he’s a triple-threat leading man and a force to be reckoned with on both stage and screen. In Bleu’s tap solo during Act II, he rhythmically darts up and down the metal stairs, dances on the ceiling, and embodies the ragtag charm and technical ease of a modern-day Gene Kelly. 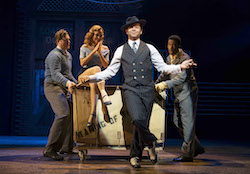 Warren Carlyle’s choreography in the rest of the show certainly does not disappoint. While the song-and-dance numbers seem to come out of nowhere and don’t really do much to move the plot along, they’re spectacularly entertaining, nonetheless. A few memorable moments include some grape-stomping ‘ography with men lifting and turning bare-footed ladies in and out of barrels and a wildly (wonderfully) inappropriate trio (“Tom, Dick or Harry”), where each male suitor tries to one up the other with knee slides, giant leaps and multiple pirouettes. “Too Darn Hot,” at the opening of the second act, is a showstopper (hello, Tony Awards?). The number builds with such athleticism and gusto that the audience is sure to break a sweat just watching.

There’s no disputing that Carlyle knows how to choreograph, especially for his male ensemble whose dancing frequently incites mid-number applause in both Kiss Me, Kate and his recent Hello, Dolly. But, especially in this revival where the creative team seemed so invested in clarifying some of the gender disbalance, I wish the female ensemble was given as much choreographic bravura as their male counterparts. While the men’s dancing is virtuosic, powerful, dynamic and competitive, the women’s is always refined, lovely and (dare I say?) a little reserved. In this 2019 revival, O’Hara was given specific direction and slight line edits to make her character a strong and equal player/partner to Fred Graham.  But because this idea didn’t emanate beyond just the main character, it makes me wonder if the all-male team really practice what they preach.