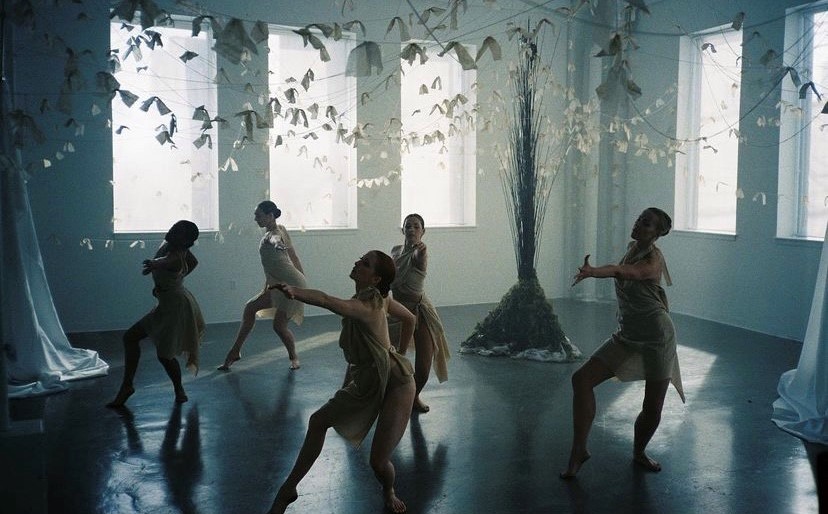 A survivor of domestic abuse, she’s called upon dance to tell stories aligning with her own traumatic experiences – work that’s elucidated these stories for a wider audience as well as contributed to her own healing. KIM, a short documentary directed by Maria Vattimo, illustrates Landle’s story of shifting trauma into growth, connection and creation. The documentary is presented in partnership with WEAVE Inc., “an organization dedicated to bringing an end to sexual assault, domestic violence and sex trafficking,” as well as with the ACE Resource Network.

At only seven minutes long, seven minutes of skillfully sewn together narration and dance, it’s an accessible and pleasing (if at times emotionally challenging to experience) spotlight on this social phenomenon. It’s something out there which is far too common, far too underdiscussed, and which such illumination through art can push – or at least nudge – toward change.

The film begins with an apropos domestic violence trigger warning. That moves into the first appearance of Landle, the narrator and protagonist, in an iconic image: her adjusting and putting on pointe shoes. It feels quite Center Stage, yet more quiet, understated and reflective. She is alone in a somewhat Spartan, yet welcoming space (production design by Kimberly Redman). It’s the kind of space that dancers often pine for: quiet and expansive, allowing for independent work and deep focus on craft. All else can fall away.

Beginning her narration, “why do I dance?” she asks. She can only respond to that question with a deep exhale and an “ugh”. Dancers can understand; it’s not something that’s easy to do justice in mere words. Yet, Landle finds those words, and does so poetically. “It’s a high that you can’t get from anything else…it’s where everything can go and be alright,” she explains. That narration overlays her dancing, in a contemporary ballet idiom: integrated, receptive, unshakeable. The movement and narration meets seamlessly, supporting each other and avoiding stealing each other’s thunder, so to speak.

The aesthetic (in aspects such as color scheme and camera filtering, by Director of Photography Aidan Guynes) is dark, earth-toned – yet also with hints of light and brighter color. Those creative choices align with how even in the darkness and heavy weight of traumatic experiences, there nevertheless still is hope for resilience and growth.

The music soon rises to a swell, helping to build the intensity at hand. Indeed, what she describes next is quite intense – and very much evinces the need for that trigger warning at the start. The harmony of flow – of absorption in the minutiae of a beloved art form – here shifts into something darker and more unsettling.

Landle describes her experience with domestic abuse: appropriate and measured, but also fully vulnerable and honest. Reflecting Martha Graham in Lamentation, she dances with a black shawl fully covering her. The sense of confinement is palpable. In other frames, she dances on the floor, paralleling her description of the abuse. It’s challenging to experience that kinesthetic, spatial reflection of what happened to her, along with her spoken description of it – yet, she’s at least there on her own terms this time.

She goes on to describe how that trauma made her lose sense of who she is – and, little by little, she had to regain that. Dance, she noted, was the only place where she felt truly safe. It was where she could begin to regain that sense of who she is. Once she was far enough along that path to think about others having similar experiences, she knew that she wanted to leverage dance to tell the stories of individuals with similar stories, she recounts.

That leads us into rehearsal footage, Landle working with other dancers in the creation of new work: work that could tell those stories openly, authentically, and in a way that can support survivors. This is the company that she founded, Klassic Contemporary Ballet (Philadelphia, PA), a company with that clear, concerted mission at work. Landle describes that work as “using the path that [other] women have gone on, while also inserting my own experiences.” It’s simultaneously her story and the story of so many survivors like her.

Hearing the dancers in rehearsal with her speak only deepens the sense of versimillitude here; we’re really getting an honest glimpse into the company’s creative process. It’s also refreshing to hear dancers speak, and be reminded that they do indeed have voices – powerful and worthy ones, at that. As is true consistently in the short documentary, the visual and the auditory meet and meld to pleasing effect — cohesive and mutually strengthening of each other.

This shift into rehearsal footage also parallels the shift in her taking her own story to speak to experiences beyond herself (yet related to her own). It’s women moving in unison with other women, as well as lifting them up, literally and figuratively. It’s kinetic representation of the unity in shared experience, as well as mutual support within community – all of that that which Landle has created through this new company.

The movement is silky, yet firm, pliable yet unshakeable, foundationed. That matches what it takes to move past trauma and learn who you are again, as Landle describes: adaptability and openness to new learning and growth, but also a firm grounding in the will to move into something better.

Yes, there’s that larger community aspect at hand. In addition, the work of the company has seemingly contributed to Landle’s own healing; “you have to create something to also release something,” she affirms. “What good was all of that if I don’t learn something from it?” That is resilience and the post-traumatic growth of learning in action. It’s an Exhibit A of making something of the pain that can have an impact beyond yourself.

The ending screen also notes that Landle continues to be an advocate for those who’ve experienced abuse, as well as create dance works that illuminate those experiences. That post-traumatic growth, that making a difference beyond herself, isn’t a one-and-done. It very much goes on. Abuse and trauma thrive in darkness, in silence. Art like KIM, sharing Landle’s story and that of how her company came to be, can begin to shine that light and provocate that silence.

That’s an essential ingredient for breaking toxic cycles and relieving our communities of the interpersonal pain that’s too often plagued them. How can we all be a part of that change, you might wonder? Tune in, support artists telling these stories, be part of the conversation, and get ready to shake things up.