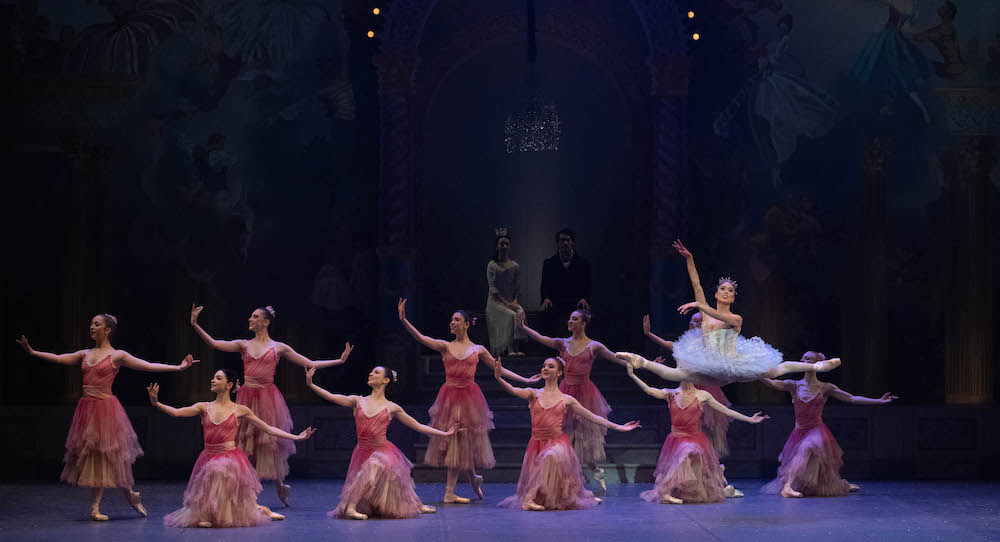 Holiday traditions: bright lights downtown, going to get a Christmas tree with the family and The Nutcracker. Yes, indeed, some people love it enough to see it every year – making it a family (or solo) tradition. One might reasonably wonder why people would want to see the same show year after year (at least something pretty much the same, with tweaks here and there). Yet, that actually could be part of the appeal; we can find comfort and inner warmth from the familiar.

Moreover, while individual ballet companies do make certain changes to their Nutcracker from year to year, they also build Nutcrackers that are uniquely theirs. Boston Ballet certainly has its own “brand” of the holiday staple: with plenty of humor, heart and measured, intentional opulence. I’ve experienced this program many times over the years. Rather than feeling tired of it, each time it’s comforting to come back to something simply pleasant – something that I can expect to be that. With the world as it is, and with what we’ve all just been through, that could be more valuable now than ever.

I felt that unique Nutcracker excitement bubbling up as the overture rose. The opening was soft and subtle, with characters gradually entering and greeting each other. Boston Ballet’s iconic Drosselmeier toyshop set piece filled the background as this theatrical action rose. Children gathered around to experience some of the toymaker’s magic. In a comic and sweet turn, they followed his actions in call-and-response. That led into guests gathering at the Silberhaus’ home (Clara’s family in Boston Ballet’s Nutcracker), with that same gradual action – setting a foundation of versimilltude early on in the program.

The young boys and girls at the Silberhaus’ holiday party were sophisticated and dapper, light and elegant in their movement. At the same time, further theatrical action with these youngsters felt fully human and honest; they could dress up and look fancy, but they were still just young people very much still learning and growing.

The parents’ dance was as lovely and memorable as always. The graceful sails of the womens’ skirts as they turn in arabesque (leg extended back behind them), supported by their partners, is always an image that I remember and treasure from Boston Ballet’s Nutcracker. Drosselmeier (Tigran Mkrtchyan) infused his movement with a mysteriously serpentine quality, one that began to effectively build the character. Clara (Celeste Cisneros) danced with lovely lines and lift, making the movement ripple through her in a way that felt sophisticated and mature for her (seemingly young) age.

Harlequin (Sun Woo Lee) danced the doll’s mechanical quality expansively, in a way that worked quite well for the character. Ballerina Doll (Ao Wang) got the robotic double-bounce just right as well. The Nutcracker Bear is another unique Boston Ballet Nutcracker staple, one which the audience evidently ate right up: clapping and “oooh, aaah”-ing before he even took a step. Henry Griffin’s leaps were impressive, given the bulkiness and (likely heavy) weight of the costume. The audience kept loving it more and more. In another sweet and funny theatrical touch, it felt like the Nutcracker Bear didn’t want to leave the stage – waving to the crowd and looking dejected as Drosselmeier led him away.

Other unique Boston Ballet staples made me smile as well: the long tug-of-war lines, boys and girls tugging against each other; the sweet girls’ dance with their new dolls; the classically elegant parents’ waltz (nevertheless also with moments of humor and authentic characterization). The lights came down (lighting design by Mikki Kunttu), and the next comic, light-hearted moments were the mice entering the dark living room, party guests long departed; audience members chuckled as they froze as they got caught in the lights. Drosselmeier was pulling magic strings to spotlight them.

Indeed, Drosselmeier was present and influential, also comforting Clara after the battle between the mice and soldiers. The Easter Bunny and Gingerbread Man (students of the Boston Ballet School) are other humorous Boston Ballet touches to the Battle Scene, characters that appear each year. They’re an effective way of diffusing the tension and reducing the risk of younger patrons feeling overly fearful – not to mention bringing some more laughs for all attending (valuable in and of itself!).

Then the magic really sprung forth, with the quintessential Boston Ballet Nutcracker Christmas tree growing (set design by Robert Perdziola) – and the majestic Nutcracker Prince (Sangmin Lee) emerging before it. The victory over the Rat King and his mousey soldiers led right into the bonafide winter wonderland of Snow Scene. The Snow Pas De Deux exhibited the most opulent finery (costume design also by Perdziola) and partnering of the most refined elegance (without feeling “stuffy” or inaccessible, which can be a fine line to walk).

The larger variation, coming soon after that pas de deux, was just as dynamic and exciting as ever. I’m always captivated by how natural and easeful it feels, especially considering how fast and challenging the choreography is: a true exhibit A of that kind of virtuosity, one that’s always on offer from Boston Ballet’s Snow Scene.

That was even more impressive when considering how the synthetic snow blanketed the stage by the end, which could become quite slippery with pointe shoes (one would imagine). All in all, with the pristine white aesthetic and such beautiful dancing, a magical, ethereal world of its own emerged – like how a snowy landscape gets more and more beautiful as the snow sticks. Clara looked on in astonished wonder, and we in the audience could join her in that.

The opening of Act II brought us the Sugarplum Fairy and her attendants, in an atmosphere feeling like a sweet ballerina music box. Seo Hye Han as Sugarplum Fairy danced with a stately, elegant quality: soft in a way that evinced an understanding that the movement and presence she offered was enough (no need to push a thing). Moving into the variations of the Sweets, Spanish Chocolate was full of vibrant personality. Their expansive movement, coming together with a fiery red color scheme, leapt right off the stage.

As is most often (if not always) the case with Boston Ballet’s Arabian Coffee, the variation was silky, sultry, and full of flexibility feats. Louise Hautefeuille and Seokjoo Kim partnered within their roles in a way that felt empowering to the female character here; she was supported, but could also support herself plenty, and also called the shots when it came to that support. In Chinese Tea, one dancer held a bright red streamer – allowing for many possibilities in shape, timing and energy in the space. That wonderfully complimented the duet pair’s (Michaela DePrince and Matthew Bates) effervescent turns and zippy small jumps, more than (now feeling outdated) chopstick fingers ever could.

French Marzipan, as usual with Boston Ballet, was pastoral, light and sweet. Highly classical, the movement was stately yet not stale. Bo-Beep and her sheep (students of Boston Ballet School) added something honest and human to the classical virtuosity of the main trio (Graham Johns, Lauren Herfindahl and Addie Tapp). Next, to the crowd’s delight, came Mother Ginger’s grand re-entrance after two years absent from the Boston Opera House stage (due to COVID complications). That felt like returning to treasured traditions, for sure, and perhaps even a sign of us having settled into some sort of “new normal.”

Clara and Drosselmeier dancing (and the latter with Mother Ginger, comically navigating her gargantuan skirt), mixed in a teaspoon more of that sweet humanness and authenticity – amidst all of the grandeur – that’s very characteristic of Nissinen’s Nutcracker. Trepak brought us high-flying power in spades, from three danseurs (Tyson Ali Clark with Alec Roberts and Sun Woo Lee) – not at the expense of refinement and ease, however.

That closed out the country variations, and the Flowers took the stage: dancing highly multi-directional, dynamic movement with the softness of gently wilting flower petals. Dew Drop (Lia Cirio) danced with the understated pride of a beautiful flower spreading its gorgeous petals, nevertheless lightly curving with the wind. The skirts of Boston Ballet’s Flowers costume always to me resemble layers of delicate petals – and is something else that I always remember, and look forward to, about this production.

John Lam and Han worked together as one breath, one body in the Coda pas de deux – then brought their own characterization and style to their solo sections. Lam, for his part, danced with enticing size, power, and ballon (lift and lightness). At the story’s climax (arguably), the whole Kingdom of the Sweets danced with Clara and Drosselmeier. It’s always a grand, captivating moment that Boston Ballet’s Nutcracker presents: with a large cast, opulent design, and gorgeous movement.

Signature Nissinen Nutcracker was also the ending, with Clara sleeping peacefully on the couch and characters of her adventure running by behind her. Then she awoke, and – as we could see in her face – wondered if all of the magic was just a dream. Yet she reached up to touch the crown on her head, the crown from the Sugarplum Fairy. Surely, it must have been real!

Believing, suspending one’s disbelief, or however any given audience member might receive this moment along with Clara, the magic of the program was undeniable. Perhaps we can all savor the holiday magic a bit more, however or wherever we find ourselves at the time, if we can allow it just as Clara has. Coming back to comforting, familiar traditions like Mikko Nissinen’s The Nutcracker can’t hurt there. In an uncertain, sometimes scary world, we at least have that.