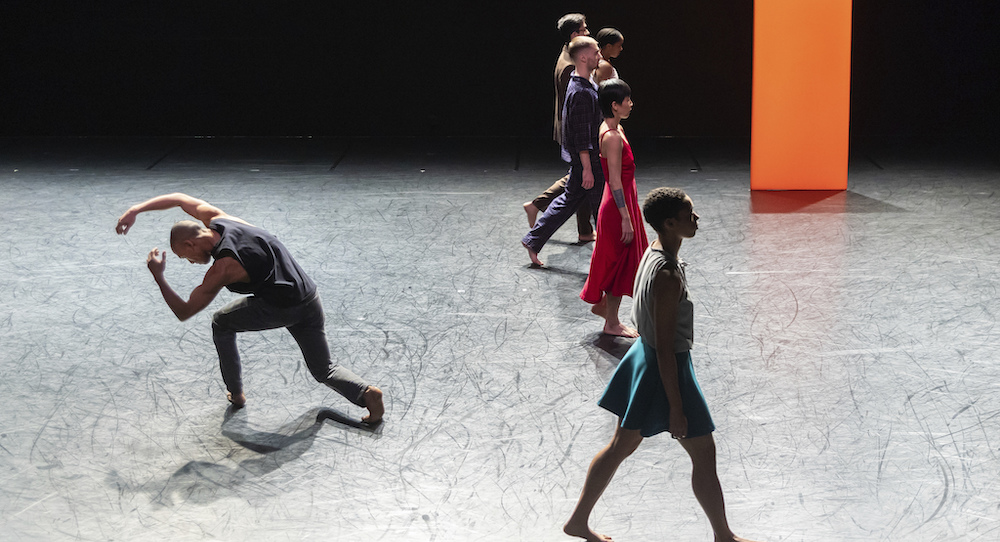 The lights come up to reveal a red door-like object and a female dancer standing center stage. She holds her left arm up, circling her hips to ambient music. Four dancers enter from all sides wearing street clothes. The dancer in the center introduces herself: “My name is Eleni.” (They use their real names.)

“I have a brother and a sister.” Eleni speaks robotically, her speech spaced out: “My mother is dead. My father is also dead.” Everyone drops to their knees, and against the plain-spoken text and previously slow movement, this abrupt level shift is captivating. The grandfather, Jacob, does a silly, light-footed dance in his pajamas, and they all arrive in a family photo. “Once my family really really loved to dance.”

Every movement feels important, and every moment of unison is incredibly well-timed despite the apparent nonexistence of any countable music. The dancers’ measured movement, blank stares and frontal orientation are periodically pierced with frenzied bursts of virtuosic dancing. There are no in-betweens –– the transitions from calmness to hysteria are invisible.

The characters are very clear, even without the introductions that structure the piece. Solo breakout moments establish unique movement vocabularies and styles (the dad, Jesse, for example, flaunts a cute nerdiness while performing impossible jumps and seemingly ankle-breaking drops), and the dichotomy between individual personalities and family resemblance forges a productive tension that contributes to the simultaneously energetic and quiet atmosphere that unites the work. (I found the grandfather character to be the least developed, perhaps a commentary on elderly people being treated as invisible in contemporary, consumerist culture.)

In one section, the dancers walk back and forth across the stage, leaving a family member behind with each pass to perform a short solo. There is no disguising of formation changes or really anything for that matter, and the predictability of certain compositional aspects of the piece, a device used by Naharin in many of his works to varying degrees of success (Decadance: quite successful, Venezuela: not so much), serves as a welcome anchor and throughline in Yag.

Now all the dancers exit except Jie-Hung, the mom, and Miriam, the sister, who perform a series of assisted head rolls as Eleni reenters, carefully laying out fortune cookies in an evenly spaced line from downstage left to upstage right. Jacob, the grandfather, enters soon after, crunching down the line, sparing one cookie between each step. Jesse, the father, comes in behind to smash the cookies left in Jacob’s wake, and Kevin, the brother, follows as static builds in the sound score. (Are the men crushing the women’s dreams? Or perhaps their ideas about fate? About luck and the power of false traditions?) Eleni eats the last cookie and breaks the deadpan facial expression that’s so far dominated the piece, snarkily chomping as the sound continues to surge. She lets the fortune fall carelessly to the floor and starts swaying her pelvis forward and back flirtatiously. She’s soon joined in this action by her mother and sister. (A victory of the women over the men?)

Miriam yells her introduction over the deafening static, performing sharp movements between spoken phrases in one of the most compelling moments of the piece. Her anger is palpable. She reports that all of the men in her family are dead.

The red “door” (perhaps meant to represent the front door of a house / the facade of the consummate family) finally has its moment when the parents carry it across the stage as the siblings sit evenly spaced donning unimpressed expressions, and the grandpa retraces his steps along the crumbs to dissonant string music. The dad, now hidden behind the door, throws clothes up and over it. The mom dons his turtleneck and blazer, and suddenly the brother is up, delivering his lines while effortlessly performing huge split and straddle jumps. Soon after, the grandfather begins to snap his fingers and the rest of the family shifts back and forth in time, the stage pulsating with their small, precise movements.

The source of Miriam’s anger is revealed through a menacing duet with her shirtless father in which a head-in-crotch grand plié manipulation motif that took place in her duet with her mother is repeated with more violence. Perhaps this signals that Jie-Hung was complicit in Jesse’s crimes against his daughter. Miriam shows her discomfort through scrunched toes and shaking legs as Jesse lifts her into the air. The section ends with Miriam performing an impressive amount of wide-arm push-ups, her arms shaking before Jie-Hung eventually gives her permission to stop.

Jesse throws his pants and glasses over the door and Jie-Hung puts them on. The door falls on his nude body and she leaps on top of it as the music halts. “My husband is dead,” the mother says before even introducing herself, a notable pattern break.

Funky music interrupts Jie-Hung’s strained monologue (this is clearly the groove section of Gaga class), and Miriam dances on top of her crushed father. He cackles under the door and we see it shake. Kevin laughs along with him. (Has Jesse’s deviance rubbed off on his son? Or is Kevin laughing at his father’s helpless position? At his terminal impotence.) This section features pleasant weavings into and out of unison and a satisfying groundedness.

A sentimental music returns and the family performs simple, balletic choreography in perfect unison. Jesse throws off the door and drags himself across the floor on his stomach, joining his family in a “new” portrait: the dad is nude and vulnerable, the mom has taken his place, and the audience understands far more about the family than they did at the outset.

Apart from Last Work, Yag 2022 is the most successful Naharin piece I’ve seen and by far the most theatrical, which is perhaps why it was selected for the charismatic Gibney Company. While it looks definitively different (more controlled, less incomprehensible) than it does on Batsheva dancers, it is still incredibly satisfying and distinctly Ohad. The Gibney dancers execute the piece beautifully, readily capturing its somber tone and distinctive characters. Miriam Gittens, who joined the company this year, stands out for her precision, intensity and incredible technique. While the first iteration of the line about dancing seemed cheesy, by the end of the piece, it felt earned and came to symbolize far more than I could have anticipated.