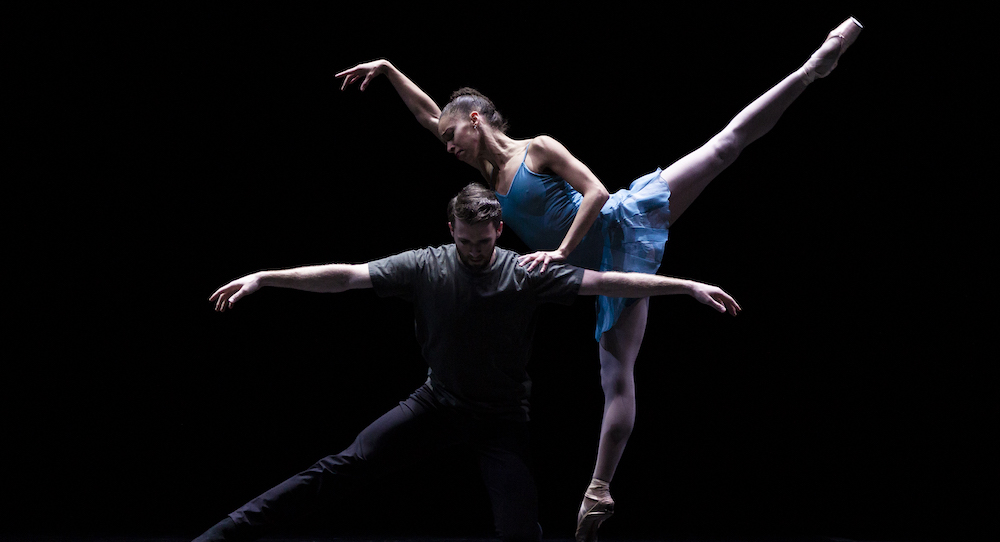 “Draw outside the lines,” they tell aspiring artists: an encouragement to find a unique voice and push existing boundaries. Yet what if we could go even further than that – what if we could be even more bold and imaginative, while retaining principles of aesthetic and form that serve the work at hand? Boston Ballet’s MINDscape boldly ventured into answering those questions.

The program offered a restaging of William Forsythe’s Blake Works I, and a world premiere from Forsythe and another from Boston Ballet Resident Choreographer Jorma Elo. These works not only drew outside the lines but also looked in a new direction and began to draw completely new lines there – and invited audience members to come along with them to that wholly new territory.

Blake Works I (2016) was just as pleasing as when I saw it in 2019. Yet, this time, I could even more so appreciate the complexity of how timing, formations, and structure intersect in this work – how port de bras and other physical shaping shifted amongst groups and through that brought the soulful vocals and beats of James Blake’s music to kinetic life.

The daring and vigor of using contemporary R&B as a driving force of concert ballet work, presented by a major U.S. company, also struck me even more this time. The work’s atmosphere was one of harmony and soulfulness – pleasing, in an uncomplicated way, but also intriguing. The movement, clearly deeply thoughtful and brought to life onstage by Boston Ballet’s outstanding artists, was just as layered and satisfying. All of that would defy anyone to say that Forsythe’s creative risks here didn’t pan out.

Seeing such a thoughtful and dynamic work again, and noticing how I personally was experiencing it in a more profound way, also made me ponder on how where we are in ourselves can impact how we experience such a work of art: how much we can take away from it and appreciate it.

Granted, whenever I take in Forsythe’s work, I do wonder if more temporal variance would make the movement vocabulary even more thrilling; much of his work goes like a high-speed train – certainly an exhilarating ride! Yet, people can appreciate certain qualities through difference and change. It would take creative experimentation to know for sure. Maybe that wouldn’t serve what Forsythe is trying to create.

The world premiere of Jorma Elo’s Ruth’s Dance followed. The work struck me as a 21st century re-imagining of Balanchinian neo-classical ballets: bringing a dynamic classical score (from Bach) to life, and with much classical movement vocabulary but also a new brightness and fresh, fully original ways of shaping and moving the body.

Structurally, much of the work centered on three pas de deux partner pairs, each easily identifiable and clearly delineated by the color of their costume: blue, plum, and an orangey-red. Accompanying them was a large corps wearing blue. Each of these colors faded from yellow into white: an inventive and pleasing design from Costume Designer Ezra Lovesky.

The trusty corps entered and exited while the three pairs did the same: an excitingly mercurial structure of varied little chapters to enjoy. The corps, creating a moving wall of shifting shapes, counterbalanced short solos and duets that moved effervescently all across the stage. Jeffrey Cirio, a Guest Artist who will join the company for the 2022-2023 Season, acted as a sort of mysterious intermediary amongst all of these separate groups – and was explosive in his energy, technical prowess, and pure commitment.

Like Forsythe, Elo demonstrated a skill at creating an enticing moving picture through a corps executing port de bras in various timings and shapings. The corps offered something visually separate from the work of the soloists, but supported their full vibrancy. The movement overall was elegantly statuesque, but also softened and curvilinear – at times even serpentine.

One beautiful spinal release that stood out to me, in particular, made me crave even more surrendering to gravity. Yet it could be that such surrendering wouldn’t work with the energy and atmosphere of the piece – again, it would take creative iterating to know for sure.

The work ended with a vivavious ensemble section, and the group then formed a classically stately tableau. Their smiles and total presence, not to mention some of the shaping in the tableau itself, spoke to something more modern and light-hearted. It was if the ensemble knew that they were offering something ceremonial and grand, but didn’t take themselves too seriously while doing it. A more modern ethos has showed us that we can have other values, and none of it has to be so precious.

The ballet world sometimes draws lines between very classical work and very and very modern – but Elo charted a third path and joyfully waved us along to join him on it. Interestingly, this third path held qualities and values of the neoclassical model of the past. We can learn from many different sources, and travel in many different directions. It’s all on the table, and works like Ruth’s Dance remind us of that. On another level, the work was satisfying and beautiful, plain and simple – and that could be just what we all need right now.

Closing out the program was the world premiere of Forsythe’s Blake Works III (The Barre Project). Just as with his 2017 third act of Artifact, this continuation of his Blake Works series brought concept and aesthetic to entirely new territory. Talk about going beyond drawing outside the lines; Forsythe was definitely drawing a whole new shape with all new lines, and – just as Elo had – invited us over to this new space.

Dancers moved at a long barre upstage (hence, the “Barre Project”) – finding impressive ease of transitioning and expansiveness of movement considering that stricture of physical confinement. When it comes to creating and to artistry, limitations can liberate. Their movement also had lovely qualities of release and softening into gravity’s pull – even, at points, a sense of undercurve and overcurve – while still maintaining clear classical form.

At other points, dancers moved away from the barre, farther upstage: in pas de deux, solos, or trios. This movement had Forsythe’s typical ingenuity of movement shaping, initiations, and use of momentum through the body – all of which is unmatched, and simply thrilling to experience. His boldness of concept is just as unmatched and thrilling.

Dark colors in costuming (from Forsythe, Howard Merlin and Tiler Peck Designs), low lighting (from Brandon Stirling Baker) and Blake’s soulful vocalizations all built a full atmosphere. It was an air of a dancer being alone in the studio at night — tired but 150 percent committed, giving more than they have to give until the work is done.

That’s certainly something relatable to dancers in the audience, and also to others who’ve worked hard in similar ways in their own endeavors. On the other hand, the work could also be understood and fully appreciated as an aesthetic experience, without narrative or layers of meaning.

Then came something even farther outside of the proverbial box (we were way too far away too draw outside of any lines, we were in another place entirely) – at least for ballet! Video was projected on a gargantuan screen, as wide and as tall as the Opera House stage space – video of dancers’ hands at the barre. These hands crossed and uncrossed wrists, placed themselves on the barre and then drew away, slid and settled.

Combined with that evocative low lighting, and the artistry within basic hand motions, here something relatively simple was indescribably beautiful. Just as with the prior section, something about this spoke to the soul of a dancer: hungry to express, doggedly committed (to a fault? – perhaps a whole other conversation). If the artistic departure of this section was a risk, this writer thinks that it was one well worth taking – because it brought us somewhere striking and memorable.

After the film, we were back to the barre and in “center” (downstage of the barre). Dancers demonstrated even more technical command here. It seemed clear, especially in this section, that Forsythe is also gifted at truly capitalizing on dancers’ strengths. Choreographers are leaders, and the best leaders make those who they lead better.

The ending brought all six ensemble members back onstage, for a big exciting bang of a final section. The dark, if soulful, atmosphere, persisted – but the energy was elevated. Dancers might sometimes struggle as artists do – diligently working until they nail it – but they (most often) don’t do it alone. Each artist has their own lonely journey of their own growth, but they can at least travel it along with others traveling a similar path.

It can be scary to take things to a whole new territory, nevermind “draw outside the lines” – but at least we have others to do it with. That can make the journey, however long and winding, a little easier. Nothing groundbreaking or truly meaningful was ever achieved without risk. Artists like William Forsythe, Jorma Elo and the stellar performers of Boston Ballet remind us of that with programs like Mindscape. I’m feeling inspired to take deeper plunges myself – how about you?