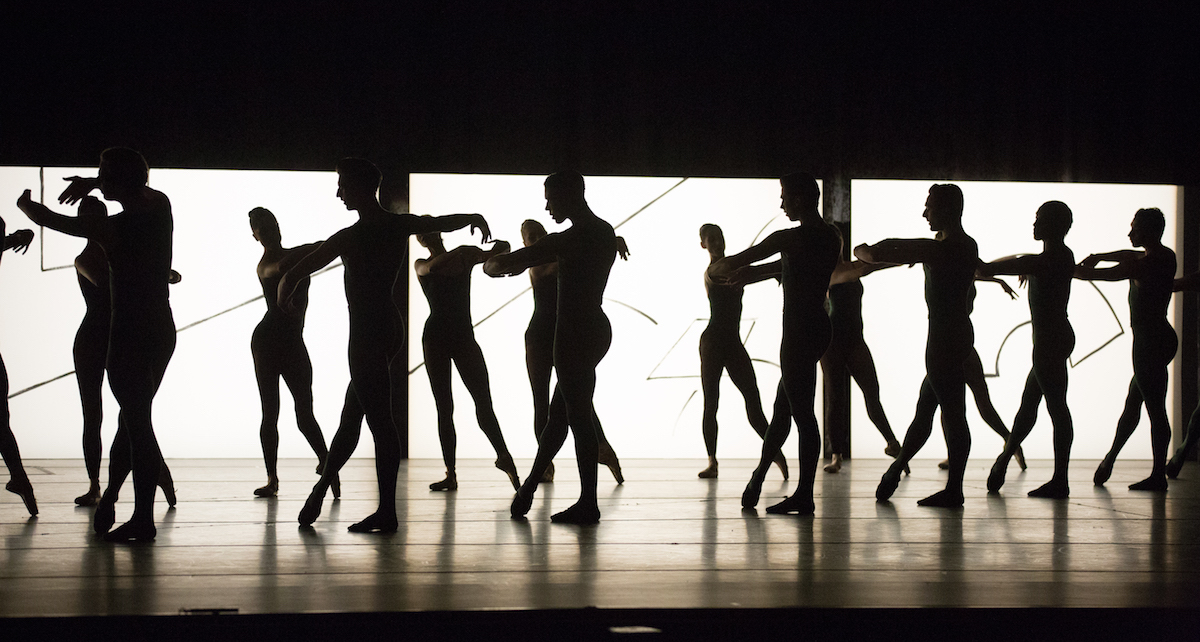 Post-modern art grew from socio-political shifts of post-World War II western society. Some claim that with the enormity of the ability to annihilate the human race at the touch a button, rational artistic classicism has no longer answered the questions and concerns we have faced. Artists have turned to “meta” (the form at hand discussing itself), as well as the absurd. There have been re-definitions of virtuosity, of performer and audience roles, and the nature of consciousness itself. We again face new challenges and questions in the 21st century, and our art may again be shifting to follow suit.

Perhaps this post-post-modern art is a rejection of the binary, the idea that something must be one thing or the other. Perhaps our evolving art is one where spectrums live and breathe – of virtuosic and pedestrian, of rational and absurd, of tradition and innovation. William Forsythe’s Artifact was originally created in 1984, has been reworked several times since, and re-imagined for 2017. Boston Ballet is currently presenting this re-imagining, and in so doing is opening up dialogue on those (and other) aspects of art. Rather than binaries, there are non-binary fluidities in this wonderful work.

Indeed, the choreography displayed was a true fluidity of virtuosity and pedestrian simplicity in movement. To open the show, a lone dancer walked slowly – not as slowly as mercury or molasses but with a similarly sustained and melting quality. Her arms also moved in unconventional patterns and in an equally sustained quality. The house lights were still up, which was also certainly unconventional. Similarly, simple locomotion propelled formations and human borders at other points in the show. Repeated arm patterns created almost meditative moving pictures, sometimes filling negative space and other times not.

When virtuosity staked its claim, it truly did but without announcement or fanfare. A section of male dancers’ allegro blended quick and complex footwork to appear as natural as walking. A later allegro section, a virtuoso piano melody accompanying it, was so fast that its execution somehow didn’t feel humanly possible. But the Boston Ballet dancers did not fall off-beat once. 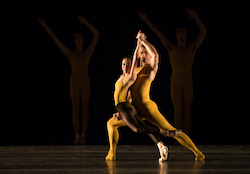 At the same time, in stark contrast to such exceedingly technical movement, other dancers in lines offered pleasant body percussion and other casual pedestrian movement. An intriguing motif was arms in a bent-elbow cactus shape, and an audible clap coming with the arms occasionally closing in front of the chest. It all blended to offer a stage picture, and overall auditory score, that delighted and astounded. The main tenor of that score, from sound designer Niels Lanz, also went from the elevated classical to the mysterious post-modern in style; it ranged from that allegro piano accompaniment to a cacophony of body percussion, piano and speech. 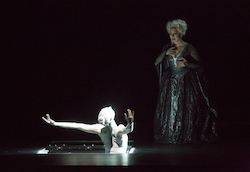 That speech included the narration of an older woman in period dress and a man speaking into a megaphone. They presented wordplay that reminisced theater of the absurd; there were turns of phrase, changes of tense and parts of speech that changed meaning – but to what meaning could be unclear. Even so, key words such as “remember”, “forget”, “saw” and “thought” surfaced themes of memory, experience, perception and truth. As the show began, the woman pronounced, “Step inside.” As the show ended, she urged, “Step outside.” All this together pointed to commentary on theatrical experience – an artifice based on truth, beginning and ending at set points but resonating before and after.

In this interpretation, a perhaps tongue-and-cheek lighting choice (lighting design also by Forsythe) was industrially bright and yellow lighting solely from high on stage left – fully opposed to the basics of crafting pleasant theatrical lighting. Other lighting was classically beautiful, such as low amber lighting shining on dancers in golden-hued costumes (costuming also by Forsythe). A very innovative and memorable moment in lighting was an effect that put the dancers in black silhouette against a white backdrop. 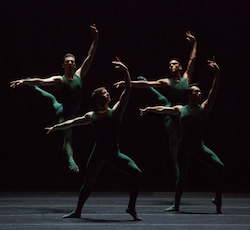 Yet, that interpretation of the show as a commentary on the theatrical experience is just one of many that could be valid, with evidence to support it somewhere within the many rich and complex aspects of the work. Forsythe has said that every viewer brings a unique experience to the theater, and from that one forms an understanding and interpretation of what one sees that holds true for him/her.

That’s all for the good, as our art does not have to be one thing. Given the nature of our world in 2017, our art serves us best when it can support plurality – when we might emerge from the theater perhaps not with concrete answers but instead better prepared for our journey toward those. Boston Ballet is offering this kind of art with Forsythe’s Artifact 2017. May all audience members embrace it as something far more than one thing or another, and all the more ready for their journey toward their own answers.