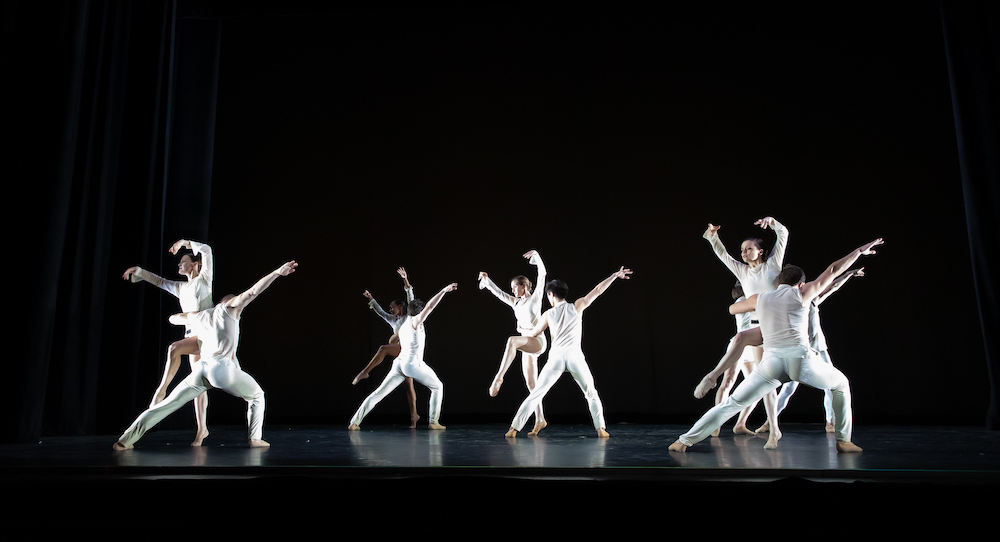 I was walking to a dance performance, and not through the sort of surroundings that are typically around me as I head toward one; it was a maze of small paved roads, rimmed by the buildings of a suburban private school campus. The theater – hidden in that maze – was just as grand as many I’ve experienced in big cities. So zero disappointments, the trek was well worth it!

That made me think about how Island Moving Company (IMC), in its 40 years of presenting work, has performed in a plethora of intriguing spaces. The program I took in that night, Resonant Visions, had a similar multiplicity – celebrating fresh choreographic voices and honoring more longstanding legacies, embracing both the comfortably classical and the boldly contemporary.

Apart from the works described in detail here, the program included Nicolo Fonte’s Where we left off – just as athletic and dynamic as it was when the company performed it in March of this year – and Miki Ohlsen’s Kindred / two hearts(2018) – a soulful and soul-stirring illustration of siblings supporting each other through life’s trials.

The program opened with IMC Associate Artistic Director Danielle Genest’s Harbingers (2020), a duet with entrancing concept and movement vocabulary – and beautifully performed by Margot Aknin and Brooke DiFrancesco. En pointe and with lifted energy through the body, the work was more classical than much of Genest’s work – an intriguing departure for her.

That lifted physicality helped to create the sense of birds in flight, birds from Norse mythology who flew over the world and gathered information as they flew – to bring back to the god Odin. Aligned with the sense of observation and discovery, movement vocabulary and staging had an exploratory sense: using the full stage and much of the movement possibility within their bodies.

Expansive, angular shapes through the upper body emulated flight. As crows, more specifically, they wore black leotards with wing-like gently hanging sleeves (costuming by Eileen Stoops). In individuality, each dancer found unique movement in her body and through the space. In connection, they created shapes together: lunging deep, joining hands, and opening their wings and heart backward together.

The presence which DiFrancesco and Aknin brought to their performance matched the drama in the score (from Hildur Guðnadóttir) – both of which appropriately met the grandeur of an ancient, mythological story. All of it brought my mind to the idea of discovering, learning, and growing with each place we go – and then sharing all of that beyond ourselves. That’s a grand idea to fit a grand old tale!

Two pieces later came the premiere of Tristian Griffin’s deliciously edgy and quirky The Missing Peace. The large ensemble piece exuded a commanding, fiery energy right from lights up. Turbulence and mystery were also in the air right from the start. A pulsing electronica score (from Michael Wall, edited by Griffin) and low lighting of dark greys, blues, and purples (from John Boomer) helped to build that atmosphere, note by note and color by color.

The large, vibrant ensemble found unity through Griffin’s unique movement vocabulary – which offered strikingly athletic, inventive re-molding of classical form. Some talented dancemakers manage to find wholly original shapes and movement pathways, when it sometimes feels like it’s all been done before – and, to me, Griffin is one of those dancemakers.

In contrasting moments of individuality and self-discovery, ensemble members grabbed hold of a foot, an elbow, a knee. Swerving and serpentine movement embodied searching. This was all evocative and raw in that sense of searching – of oneself and beyond oneself. That’s not to mention that this vocabulary was, again, deliciously original and quirky! Griffin did note in the program that he was interested in exploring that individual/collective dynamic with this piece, and that came across in a compelling and clear, yet not prescriptive or literal, way.

As the piece progressed, various relationships between dancers, and groups of dancers, emerged – surfacing a myriad of challenging questions of being in community and in ourselves. Do we revert to old patterns in the presence of certain others we encounter? Do the scars of the past shape how we step forward? Can we find new ways of moving through space and with others? A work of dance art will not provide a neat answer to all, or any, of these questions – if such neat answers even exist. Yet it can help us think and feel in ways that lead us to our own answers, and we can step forward from there.

Closing out the program was the Premiere of Colin Connor‘s Unearthing Beauty, for Miki, a work dedicated to Ohlsen, who, after 40 years with the company, is retiring at the end of this summer. Fittingly, the work drew inspiration from her: her ways of working, her unique demeanor of elegant vim and verve, her movement affinities and favorites.

It opened with audio of Connor in conversation with Ohlsen: discussing the ways in which the company has and hasn’t changed, what has driven and inspired her, and – crucially for the piece to come – how she loves to work in the studio from a stool. “It gives me a unique vantage point to see the world I’m looking to create,” she said. That stool became a visual, kinetic, and structural organizing principle for the work: dancers embodying Ohlsen from it, dancing with and around it.

Gradually, gracefully, a studio atmosphere arose. Ensemble members wore classy dancer pedestrian, moving with and around each other in various groupings: all to the accompaniment of live piano (from Pianist Andrei Baumann). Turning low and lifting higher with a light push of the ball of a foot, they balanced grounding and rising energies. In partnered pairs and then later moving with a large group, they demonstrated comfortable attunement through various ways of being in movement with other souls. More than that, they projected authenticity and honesty. For my money, that’s all very Miki!

By the end of the work, the whole company filled the stage and moved vivaciously. The energy at hand here had significantly picked up from the quiet, soft energy from which it had started – developing from introspective to boisterous, both qualities with their own place and value.

To end, a single spotlight lit the stool at center stage, before that light and the score cut out.

That brought to my mind Ohlsen’s legacy; the things that she has nurtured, and things that are uniquely her, will resonate through the company even without her physically there in the studio and making big decisions.

This program also included the work of those who will carry on that legacy: a multiplicity of perspectives. Indeed, multiplicity is simply part of the company and what they do, from the voices they platform to the kind of work they dance to where they dance it.

Just like much else nowadays, it’s impossible to know the exact nature of the company’s future. Yet, if I were to guess, I’d say that multiplicity will remain – and those impacted by what this company offers will be all the better for it. That’s not to mention the ripple effects that will resonate from there. Onward and upward!