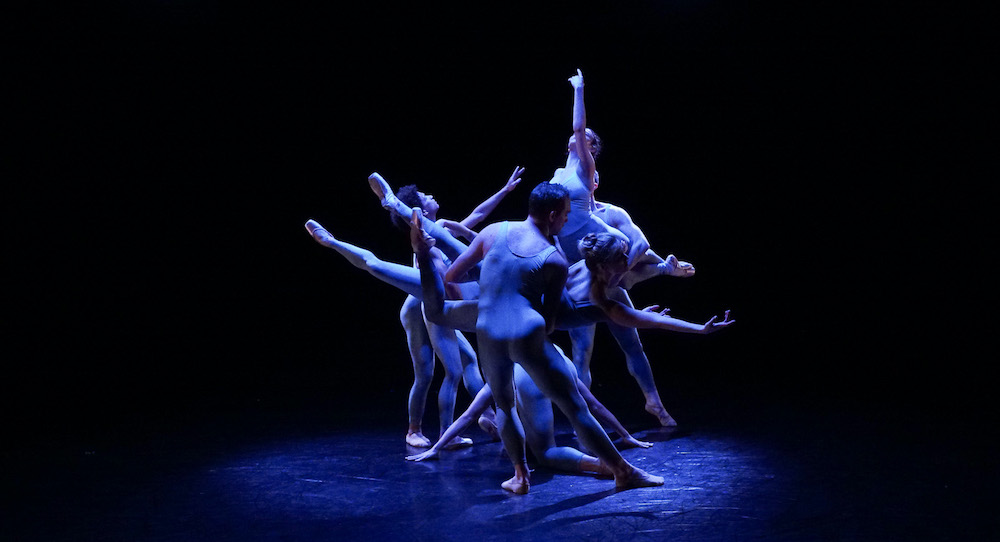 Lord knows that we could all use a little hope these days. Can dance get us there, in a way that translates to people from all walks of life? With the family programming Goldilocks and the Three Bears and the repertory program Up Close on Hope, Festival Ballet Providence (FBP) offered something that had true potential to bring a little hope, offered in a way that was accessible and approachable enough to truly translate to all sorts of audience members.

The title Up Close on Hope was likely connected to the location where the programming was presented, at the company’s black box theater located on Hope Street – and, fittingly enough, the programming itself did bring the sense of joy and possibility that can garner hope in tired hearts. More than that, the company took several intentional, concrete measures to make the programming broadly attainable and relatable – whether one was a long-time ballet aficionado or had never before experienced concert dance.

Being in an intimate black-box space, seeing and viscerally feeling the work right up close (per the program title), only enhanced these effects. Audience members could even see dancers warming up on stage before the program kicked off, whereas in a proscenium stage setting they’d be hidden behind a grand curtain. There were many little ones in attendance, and I heard one ask her daughter, “Which one do you think is Goldilocks?” (And there went my heart melting away!)

All of that accessibility only made the hope within the program all the more real and all the more inclusive. Fully aligned with those qualities, FBP Director Kathleen Breen Combes’s introduction was warm, welcoming and even humorous. (“It’s been awhile since some of you were in a theater, so what do you do if you like something? You clap [claps],” she said with a little smile and laugh.)

Goldilocks and the Three Bears began with a short, yet fairly comprehensive introduction to classical ballet: including aspects of history, class structure, movement vocabulary, sequencing of performances, and even a chance for audience members to try out the six ballet positions and a basic port de bras (bringing an immersive and participatory aspect to this ballet primer).

A narrator (Audrey Lukacz) talked through all of this information while dancers demonstrated: making both auditory and visual avenues to learning available. Many potential audience members likely feel that ballet isn’t for “them” (learning that from cultural, social or experiential messages) – yet presentations like these can begin to break down such walls, brick by brick.

Then the title program officially began, with another narrator (Kelly Robertson) brightly introducing us to the family of three bears. A spare set design offered everything that the story needed: a table with breakfast items, three chairs and vertical beds (a design choice that cleverly saved stage space – scenery by Sarah St. Laurent).

Mama (Anna Lisa Wilkins) and Papa Bear (Joseph Van Harn) danced and enjoyed the peace of the morning before Baby Bear (Kobe Atwood Courtney) awoke – after which point “things wouldn’t be so peaceful,” explained the narrator. That’s something to which many parents of little ones nowadays can relate! The narrator also later noted that Goldilocks had “a long and drawn-out lockdown,” humorously placing the story in the modern-day.

Soon, Baby Bear awoke and, from time to time, all were dancing. Mama Bear offered lifted and graceful turns, Baby Bear moved through sly little jumps (demonstrating his mischievousness, as the narrator has described), and Papa Bear danced with the goofy yet strong quality of a warm father. Vibrant, detailed characterization – and corresponding movement qualities – enlivened all of this movement. Later, we met Goldilocks (Madeline Glinski), who moved with light effervescence but also an accented punch.

We all know the story: Goldilocks finds the seat, porridge and bed that’s “just right” for her – and in the process takes what’s not hers. The Bears aren’t overjoyed, to say in the least, when they find her and the damage that she’s left behind. An evident moral lesson here, from the Brothers Grimms’s classic tale, is not to take what doesn’t belong to you. FBP’s version did bring that across, in a way that shared the moral without moralizing.

For example, the Bears and Goldilocks also danced together and became true and lasting friends in this ending – demonstrating that disagreements can be worked out and kinship can prevail. In that way, this retelling offered a happy ending in a way that didn’t “Disney-fy” the tale. Rather, the narrative encouraged understanding, generosity and seeing things from another’s perspective before judging or lashing out. That’s an important lesson for young ones, but anyone at any age really – arguably, particularly in these turbulent and unpredictable times.

A few hours later came Up Close On Hope. Short films with choreographers speaking about their works, along with compelling rehearsal footage, opened the program. These films continued that vein of accessibility and approachability that the earlier program had created. Hearing about meaning, creative process and inspiration for each work had the potential to enhance understanding and appreciation of them – whether you, as an audience member, were seeing concert dance for the hundredth or the first time.

Breen Combes offered an introduction as well, just as she had earlier in the day. She explained how the opening work, Annabelle Lopez Ochoa’s Returning Points, was a reprise (for the company) from the fall program Continuing Points. She encouraged audience members to really notice and feel the expansive lines and overall visceral physicality of the work performed within this intimate black box space.

Indeed, I thoroughly enjoyed this work when I took it in last fall, but feeling that visceral expansiveness so up close made it a wholly fresh and new experience. That up-close visceral quality additionally intensified the piece’s spiritual and religious undertones, as religious or spiritual experience is often quite kinesthetically tied. The classic and the contemporary, the conventional and the unconventional within this work also clearly spoke to the company’s interest in looking to both the past and to the future, as Breen Combes had described it.

Representing the “old”, the classic and established, Pas De Quatre came next. Breen Combes shared that this work is the epitome and pinnacle of Romantic-era ballet, and was made on the four most famous ballerinas of the time (so look out for occasional one-up-womanship between them, Breen Combes noted with a little laugh). That was more information to cultivate greater understanding and appreciation within each audience member.

Taking in the work, I reminded myself that every style and era within dance has its own kind of virtuosity – and it was clear to me pretty quickly that Romantic era virtuosity valued subtleties and intricacies of épaulement, gaze, musicality, and performance presence rather than never-ending lines and gravity-defying leaps. The cast embodied this virtuosity with commitment and command.

Eugenia Zinovieva demonstrated clear facility with using her strength and length but also allowed the movement to speak for itself and breathe its own life. Nina Yoshida’s performance offered an ethereal softness but also a compelling percussive quality. Kirsten Evans executed ease and fluency with the choreography’s most subtle details. Brenna DiFrancesco had a spriteliness grounded in clarity of accent as well as a connection through the Marley floor, to then rise skyward.

Then came Amar è, an evocative and bold duet from Boston Ballet Principal Dancer Paulo Arrais. In his video introduction, Arrais had shared that the work was a 21st century reimagining of Swan Lake’s second act. As part of that modern reimaging, the work called upon same-sex partnering – and, furthermore, women lifting (and being lifted by) other women.

The movement, in a word, was curvilinear: with clear classical line but also infused with undulation and serpentine curves. Even so, shapes and gestures of flight paid homage to the work’s classical opus of inspiration. Rocking hips and intimate gestures spoke to the romantic connection that Arrais had, as he noted, wanted to paint in movement.

Musicality – both in choreography and in performance (from Audrey Lukacz and Tara McCally) – was enticing, at times in harmony with and at other times diverging from Tchaikovsky’s Swan Lake score. Ultimately, it all came down to raw human connection – and portraying that connection in ways in which it’s not typically portrayed.

The world premiere of Ja’ Malik’s Fragments of Hope (Sequence Four), a work both uplifting and thought-provoking, closed out the program. In his top-of-program video introduction, Malik had noted that a key inspiration for the work was a sculpture that he saw on his daily commute – a piece of art that brought his mind and spirit to a place of hope.

A solo from Kobe Atwood Courtney began the work, with the expansiveness and heart lift to convey hope but also a connection to earth: qualities that felt indicative of thoughtfulness and truthfulness. More dancers entered in turn, wearing blue unitards while bathed in the lighting of pre-dawn: blues commonly conveying sadness and reflection but also calm and ease. Movements of arcing and circling, even with male partners cradling their ballerinas, brought to mind connection, harmony and support.

Finally, an ending section included all seven dancers – three pairs and Atwood Courtney – moving with that same lifted and hopeful, yet also grounded and truthful, quality. Smoothly geometric formations also intensified that feeling of harmony and mutual support. Here, the “fragments” of earlier in the work, of different sections danced by varying performers, cohered.

Courtney danced among the pairs, observing them. Did he move amongst them as an otherworldly force, perhaps even hope itself? Reasonable people can disagree on that, bringing different interpretations to the table, and I – as an art lover – wouldn’t have it any other way. As contradictory as it can seem, the space of uncertainty can be where we truly flourish. In its immense possibility, that space can even hold hope.

As I was walking toward the theater for the first program, I saw a beautiful mural with the words “Most of us live off hope.” Indeed – and hope is, therefore, a dangerous thing to lose (to quote a character from the hit show Lost). Many of us have sadly done just that since March of 2020. But with joy and beauty that’s accessible to all, perhaps we can get some of that hope back. Thank you, Festival Ballet Providence, for that gift.