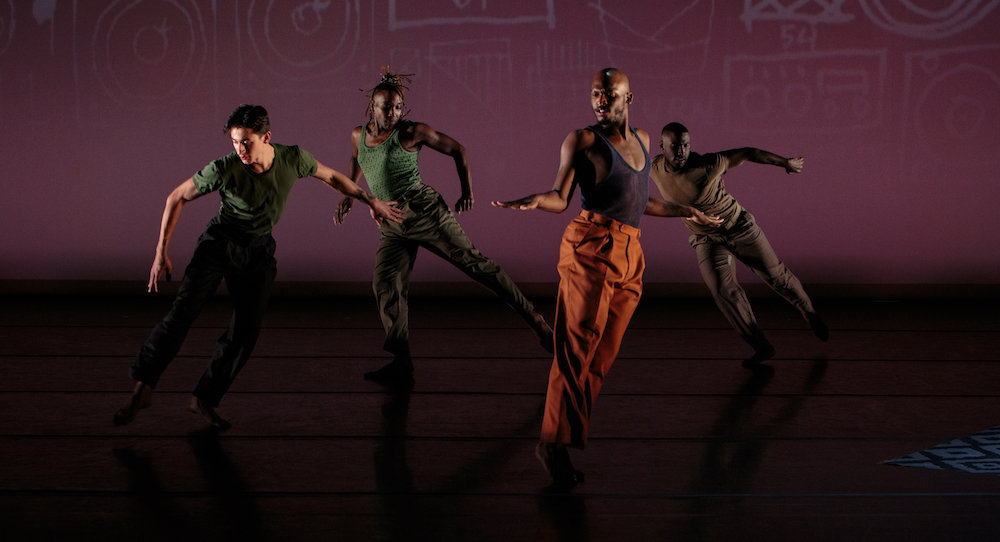 Kyle Abraham’s piece, An Untitled Love, made its New York debut at the Brooklyn Academy of Music (BAM) Strong Harvey Theater on February 23. The cast of 10 dancers honors Black History Month by embodying black excellence and the aesthetic of the cool. A dancer casually entering the space marks the beginning of the show, and a couch, plant, lamp and rug establish a living room setting. We are offered an intimate glimpse into a community brimming with utopian energy. From sultry duets to spicy trios, groups of people coalesce and expand like elementary particles or pass through abruptly like cross-currents. Soulful step touches and suave low ball changes are characterized by an effortless groove that pervades the entirety of the piece. The energy is clean but not stale, flirty but not vulgar, celebratory and laid back in a way that makes the audience feel comfortable. At home. From flashy technical elements like suspended turns and explosive leaps to pedestrian gestures like hand holding, chip snacking, juicebox sucking and conversing in tight clumps, classical “dancey” moments are seamlessly folded into the vernacular of the everyday. Black diasporic dance forms as well as contemporary floorwork also have a home in Abraham’s choreographic vocabulary, and facial expressions are unrestrained, filled with joy, feigned disgust and many emotions in between. We get the feeling that the dancers are dancing for and showing off to each other with subtle winks at the audience during certain, well-timed moments.

Text plays a significant role in the piece, and the first words we hear are: “Here come them ashy ankles!” This firmly establishes the light, pestering humor that pervades the performance. Sometimes the dancers merely mouth the words while other times they speak aloud, and the music by D’Angelo and The Vanguard occasionally covers over the text and drowns out the language. At one point, a dancer says, “I go to church so I’m not here to gossip…” before launching into a delicious roast of an offstage individual. One might at first blush and think of such playful ridicule as a corrosive, isolating force, but nothing could be further from the case here. Each character is gently mocked in turn, showing us that no one is privileged as being beyond parody.

The fluctuations of love are frequently on display, and the dancers link up to form (thankfully both queer and heteronormative) romantic couples, establishing them as not only impeccable dancers but as characters proper. The comic brilliance with which each character’s personal life is dissected foregrounds the nature of a community that is anything but atomistic. One’s personal dilemmas are never purely personal but rather the subject of collective discussion and even, at times, helpful intervention. One person’s bashfulness in front of their crush is overcome through their friends’s cheers. A woman’s anxieties about her boyfriend’s lax, dead-end lifestyle are validated by her friends’ affirmations. Gradually the viewer realizes that gossip paradoxically enhances the community’s bond, that ridicule belies each character’s concern for the others’ well-being.

The space the community inhabits seems to be deliberately sealed off from the dire realities of systemic violence with two notable exceptions. The first is the backdrop on which Basquiat-esque visual art projections by Joe Buckingham displaying racist epithets (e.g. “ape” and “chimp”) and references to police brutality (a sign in the center of a vinyl record that says “shoot here”) shift from scene to scene. The second occurs toward the end of the piece; a group section ends with the dancers’ sudden collapse to the floor as a voice recording of Doc Rivers (an NBA basketball coach) movingly laments an atmosphere of fear in a country that “just doesn’t love us.” These aspects of the piece seem to function as a kind of “absent cause,” a backdrop that lends the buoyant collective rhythms and good vibes a subterranean layer of poignance.

In one particularly strong section, the cast dances in slow motion in a sort of rave. One dancer enters wasted, gagging, falling over the couch, apologizing to the fake plant they fall on, and their friend rejects their drunken hug with a simulated face of disgust, much to the delight of the audience. In another, a group of female-presenting dancers sitting on the couch perform a conversational unison gesture phrase while “the men” watch with interest from the side. Each dancer has slightly different ways of approaching the movement, which support their individuality and suggest a certain freedom of interpretation. When the piece ends abruptly with most of the dancers crowded on the couch in couples, the audience roars with triumph and the theater pulsates with aliveness.

While there were moments when I wished for more dynamic shifts and more risk taking, and some of my questions about the more pessimistic elements of the work were left unanswered, the whole time I couldn’t help but think, this dance looks fun. I wanted to get up and move along with them! An Untitled Love brings together the candid and the performative to create a lively atmosphere brimming with the beauty of black love. The crowd undoubtedly felt that love. For one precious, celebratory hour, the world almost felt like itself again.