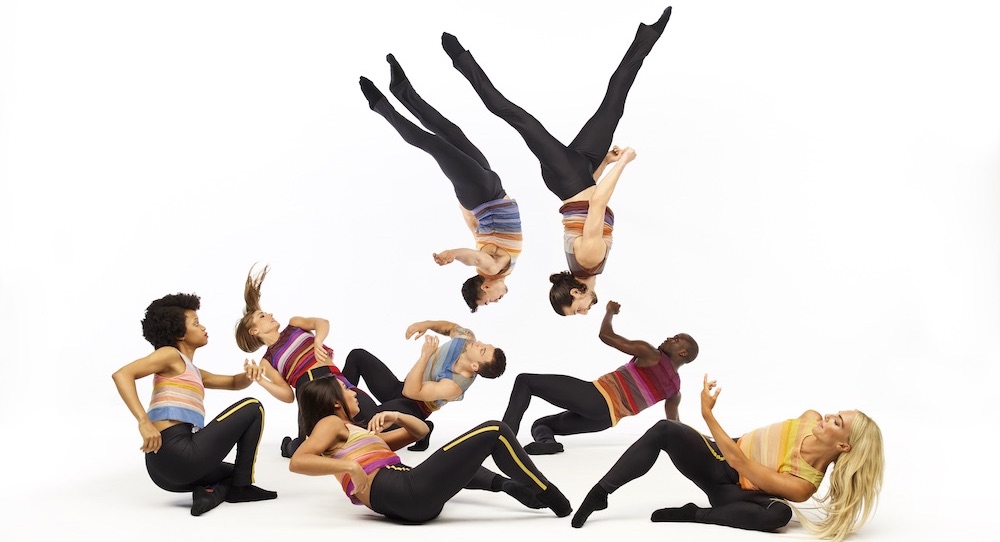 After a year away from their home theater, Parsons Dance returns to The Joyce with a mix of old and new works for audiences to enjoy. The company has stayed (safely) busy during the pandemic, and while they’ve been performing limited capacity and outdoor shows all around the country, this will be the first time since the start of lockdown that the full company of dancers has performed in their New York City hometown.

So how did the company rehearse over the past two years? Says Artistic Director David Parsons, “We started July 2020 in different locations upstate. We rehearsed many times in the studio of the late Ellsworth Kelly, the famous painter, in Chatham, New York. We were also in Woodstock, New York and Stamford, Connecticut. All of it was in a tight bubble. The dancers never saw anybody else, and they were in a dedicated studio, so they’ve been working at it for awhile.”

When asked if returning to the New York City feels like a homecoming, Parsons responds, “Absolutely.” He himself has been doing performances in New York every year since he was 22, and says that The Joyce has really been what’s put Parsons on the map.

The intimate venue is famous for up-close-and-personal, high quality programing. Known internationally, it’s a space where audiences can be right in the action with some of the world’s finest dancers.

The company will be premiering five new works, two by guest choreographers and three by Parsons.

The first guest work is Past Tense by Ballet X Co-Founder Matthew Neenan, with music by Pietro Locatelli. Of Neenan, Parsons say he has “gone into a beautiful world of gestures. He’s an incredibly precise and incredibly musical choreographer.”

The second is On the Other Side by Chanel DaSilva, with an original score by Cristina Spinei. DaSilva and Spinei were at The Julliard School together, and this is their first professional collaboration.

The two Parsons Dance premieres were either created during the pandemic, or evolved throughout it. “The first two lockdowns, no one was involved other than the rehearsal director and the dancers,” says Parsons. “Then I finished The Road and Balance of Power during the pandemic.” When asked if the lockdowns affected his creative practice as a choreographer, Parsons’ answer was a resounding “No.” No? “Nope. I get into the world that I’m creating. The Road is something we started before the pandemic. I knew that I had a lot of work to do on it, and it was an absolute joy to be able to slow down and do it. Because normally, I have to do a whole season! Every year for I don’t know how many decades, we’ve done a season. So for me as a choreographer, it was enjoyable not to have to have those premieres out. We skipped a year.”

The Road is set to the music of Yusuf/Cat Stevens, and Parsons was excited to be able to secure the music rights. “The last song is an updated version of Peace Train. He’s an incredible lyricist.”

Dancer Zoey Anderson will be performing the solo, Balance of Power, as will her fellow company member Croix Dilenno. The two will split performances of the piece. Says Anderson, “Way back before the pandemic happened, about two weeks before it hit the city hard, David, myself and Croix took the studio and were so excited for two weeks of creation. We were doing a collaboration with a live musician, Giancarlo de Trizio, and he basically grabbed every instrument in sight. He even was going to Home Depot to grab pipes.”

Anderson continues, “For this solo, it was such an honor to work with someone who was creating music for my body and my movement. And then vice versa, because I was doing movement where he would express what he saw and felt through his drums and other instruments. It was two weeks of fun and experimenting and collaboration – and then the pandemic hit and it got left behind in the dust. I’ve since gotten to perform it a few times, but The Joyce will be the first time Giancarlo will be with Croix or me on stage, live.”

Which makes Balance of Power a premiere and a reunion, all in one. As The Joyce is such an intimate theater, audiences will be treated to watching the back and forth between dancer and musician up close.

The company has enough rep for five or six shows. “We’ve brought back 12 older works, and we have five new works,” says Parsons. The Envelope, a classic, will be brought back, as will In the End, with music by Dave Matthews Band. Different programs will be running the matinee versus evening performances. Book two tickets, and you’ll likely see something entirely new the second time around. All in all, it’s set to be a night of great music.

Dancer Rachel Harris agrees. “The music is just so good. Every time we rehearse it, we’re singing together. It’s such a feel-good piece in addition to being super difficult. Dancers are either in the wings lip-syncing the words and jamming, or frantically counting. There are times when I’m on the side doing a bit of my own stuff, and there are times when I’m just trying to catch my entrance.”

It’s technically Harris’ second season with the company, but this will be her first time with them at The Joyce. “Coming into the company during the pandemic and The Road being my first work with David – the editing process never stops, as dancers know – it could quite possibly be the quickest piece I’ve ever done in my entire life,” she says. “Getting into the classic Parsons rep, having it be reshaped in real time, is super creative and a bit of a brain teaser, which is super fun for me.”

One thing you won’t see in a Parsons performance, whether at The Joyce or elsewhere, is a set. They instead use the lighting as their environment. As for why, Parsons has a deeply touching and personal answer.

“I joined Paul Taylor in 1978,” he recalls. “There was a man named Howell Binkley in the company. We toured the world together. He went there to learn from the great lighting designer Jennifer Tipton, and I was there to learn from the great Paul Taylor. Nine years later, we started Parsons together, Howell and I. He’s a Tony Award winner for the lighting of the Broadway show Hamilton, and he currently has four or five shows on Broadway. He was a co-founder of Parsons Dance, he’s lit every work I’ve ever done, and he was my best friend. Unfortunately, we lost him in August. He has done so much for the world of theater, we miss him very much, and we will doing a special tribute for him on December 5.”

While the tribute is for members of the dance and theater industries and won’t be open to the public, you can see an online tribute at howellbinkley.com, A celebration of light and love. The work of the great Howell Binkley brought Parsons’ art to life, and his impact on the company and the world of theater will continue on.

Parsons Dance will be at The Joyce from November 30-December 12. For tickets, visit www.joyce.org/performances/parsons-dance.