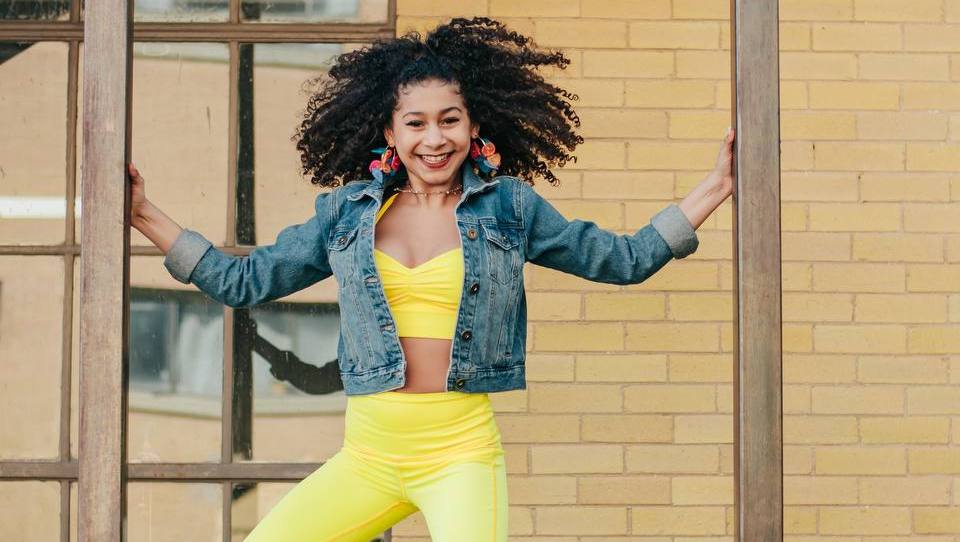 Nya Ricks has achieved many accolades in her 14 years of life, including receiving scholarships at dance conventions and top honors at competitions, as well as modeling for dancewear lines including Weissmans, Dancewear Solutions and Tiger Friday. Her top accomplishment in life, however, can be summed up into two words: cancer survivor.

Ricks began dancing at two years old, when her mom enrolled them in a mommy and me class at a local dance studio in Buffalo, NY. She quickly fell in love with the artform and became more involved at the studio.

But her training – and life as she knew it – came to a halt just four years later when she was diagnosed with Acute Myeloid Leukemia, a type of cancer of the blood and bone marrow with excess immature white blood cells.

“It was difficult, obviously. I couldn’t even go outside for six months,” she recalls. “I had to be on medication and an IV was always connected to me, so it was difficult to do certain things.”

After her diagnosis, she spent a majority of her time in the hospital. Not only was she pulled out of dance but school as well.

“It was really hard because I was a six-year-old,” she shares. “I was still a kid and wanted to do kid things, but because I was in the hospital, I couldn’t play with friends, couldn’t sometimes even walk. It was definitely difficult for me trying to balance my kid life with being in the hospital.”

Ricks spent the next several months receiving medication and chemotherapy, going through surgeries and attending therapy sessions. For a period of time, she couldn’t even walk, let alone dance. “I was really little at the time, but I was a very strong girl,” she recalls proudly. “I was able to persevere through it all.”

She focused during therapy and eventually worked her way back onto her feet. She was cleared to go back to dance and school and loved being back around her friends again after a long time apart, but she quickly realized her struggle was far from over.

“It was very hard for me,” Ricks says. “I would cry sometimes because I wasn’t able to do the things that other people at my studio were doing.”

After about a year away, she was able to get back into dance classes. It was telling how much dancers grow in one year of training, and Ricks once again felt behind.

“I could see I had different skills than they did and they had more flexibility, and they knew the routines already and I didn’t,” she says. “That was hard for me to look at them and think they had that year and I didn’t. They grew from it, and I didn’t.”

But she realized what she lacked in her physical training, she grew from in her performance ability. She was able to tap into her emotions from the ups and downs of her time in the hospital, and convey those emotions in a way her peers could not.

Now, Ricks is 14 years old. She trains five days a week – mostly in ballet – and attends dance conventions regularly. (Her favorites are NYCDA and anything Break the Floor.) She dances with power, strength and grace. Looking at her now, you wouldn’t realize she’s the same girl who just a few years ago couldn’t even walk.

As she grows older, she hopes to keep dance in her life but hopes to go to medical school and become an anesthesiologist. “When I used to get all my surgeries done, I used to be so interested in the person who was giving me the medicine to go to sleep,” Ricks reveals. “It was so interesting to me when I was so young. I used to always tell my mom I wanted to be an anesthesiologist. I’ve had that in my head ever since.”

Until that day comes, she stays connected to other kids and families experiencing a path similar to hers by giving them donations and letting them know they’re not alone.

“We take donations all year round and collect pajamas from people, socks, underwear and all that,” she explains. “Once we get a big collection of them, we drop them off at the hospital for children who just want to be comfy in their stay.”