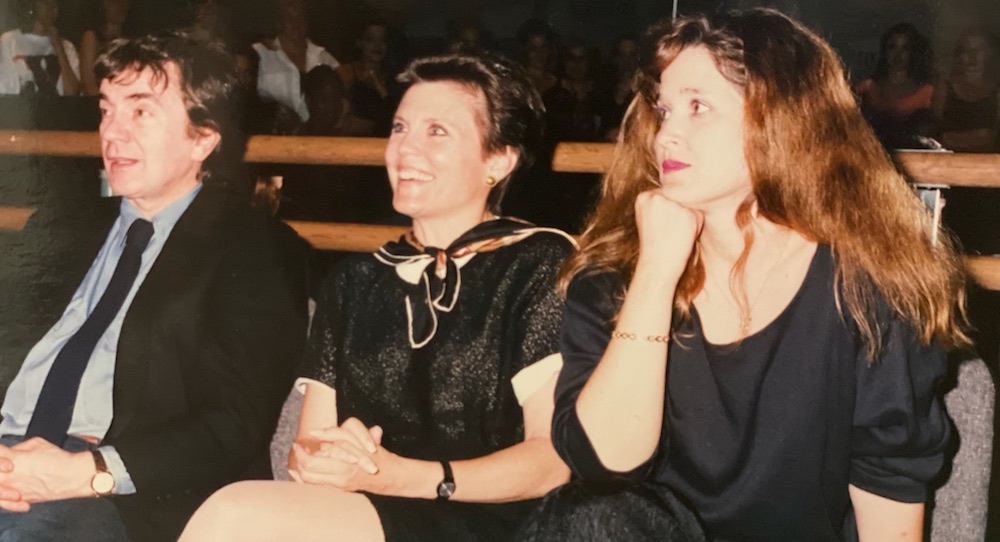 Chapter 5: We got by with a little help from our friends.

Moving forward through the years, it seemed that things were passing by at warp speed. Annie and her then husband in Clearwater, FL, parted ways and after awhile, she married a most wonderful man, sportswriter Peter Talbert from NYC. I had the privilege of being asked to be part of her bridal party along with her best girlfriend for many years, Brenda Siemer Scheider. Brenda’s husband, Roy Scheider, stood for Peter. It was a beautiful wedding.

Annie’s time was primarily spent in NYC, yet the Tampa Bay Area was still somewhat her home for a very long time as she had made many friends there. MTP grew up and moved to the University of South Florida, becoming a 501(c)3 organization. It was at that point that  Broadway Theatre Project (BTP) was born.

How impressive it was that these people took a day or two off in July in order to leave their rehearsals on Broadway or in Hollywood because they received a phone call from Annie asking them to come spend a day teaching some talented, hungry apprentices in the lightning capital of the United States.

There are just five stories I am going to relate to you pertaining to Annie’s relationship with her friends. Someday, I may put one story every so often about an MTP/BTP guest on Facebook, including those who have joined us since Annie retired from the Project. One last thing is that it is highly possible that I have left someone out from the above list. If I have, please do not hesitate to let me know and please forgive me. Here we go:

#1. Dudley Moore was an extraordinary pianist on top of being a wonderful actor. Dudley and Annie became great friends on the set of Micki and Maude. During Dudley’s Q&A, he was asked about his piano playing and he got right up, started playing and was soon surrounded by students who began singing. Whoa! Amazing! When we went to lunch later, he periodically ate bits of food off of my plate.

#2. Marilu Henner replaced Annie in Chicago. She got up and taught the students “Me and My Baby”. Thus, that afternoon, we had Marilu or the second Roxie in front of a theatre full of students doing that crazy dance. They loved every minute of it. If you’ve learned it, you know it’s not that easy!  Marilu has written many books, and she was generous enough to autograph one she gave as a gift to each student and faculty member. Fun fact: Marilu has a photographic memory and that is the truth, as I had the opportunity to work with her when she was going into the show. It was an amazing thing to behold.

#3. I don’t know what to say about Gwen Verdon. She came to the Project from the time      we were all together during Fosse until the August before she passed. She would bring hats to the Project in order to teach numbers such as “Cool Hand Luke” and “Who’s Got the Pain?” Can you imagine learning from the person for whom Bob Fosse created the numbers? I am mesmerized when I walk into my Bear Room (long story), look at my hat rack and see those hats that she gave to me. Before Gwen left that last summer, she said that she wanted to build Fosse II and asked me to learn Auf Wiedersehen. She talked about how she knew it was time to move up to her daughter Nicole’s home and spend time with her and her boys. That was the last time we saw her. I have many images of dear Gwen, from Fosse and from BTP. At BTP, I remember walking into the Theatre I Lobby at lunchtime each day only to see her red hair drenched, her face as red as her hair downing in yogurt in preparation for her next class where she would dance full-out and I mean full-out. She is so missed.

#4. Ben Vereen came to the Project reluctantly as he didn’t consider himself a teacher in those days (how ironic now!). Annie said that she didn’t know if he’d come and that he was going to try to get Liza Minelli to come with him. We waited for him at breakfast at the hotel where we had him staying. He came down without Liza. She had not shown up at the airport. Ben was fairly quiet at breakfast and wanted to know everything about what he was to do. He gave a great Q&A. As all know, his life has been fascinating. However, it was the latter part of the day that was so memorable. We were all in different rooms working on numbers. Mine were from Smokey Joe’s. Ben was walking down the hall sticking his head in the rooms and when he saw the guys in my room doing “Keep on Rollin’”, he stopped. He asked if he could stay a few minutes and he stayed for at least an hour. Ben got into it, began singing and dancing with the guys, and it became the greatest show I’ve seen during class time at BTP. He then wandered into different rehearsals where his gifts were perfect for the number and he did the same thing. Consequently, after his one day stay at the Project, when he was at the airport heading back to NYC, he asked if he could come back and he did and stayed for six days. Ben has come to the Project almost every year since Annie first brought him in. He has fundraised for us, worked as the artistic director one year, and directed a terrific show one year. He has been one of the pillars of this Project.

#5. The Gregory Hines story is wild. Annie and I went to see Gregory in Jelly’s Last Jam, and it remains the most memorable show I have ever seen. After the show, we went to Gregory’s dressing room, and he was so warm with Annie and when she asked him if he would come to the Project, he said, “Of Course! Let’s stay in touch on the dates and I’ll figure out my calendar.” It was always my responsibility to do the follow-up on certain guests, and it was with Gregory. Being one who refused to fail at anything I was supposed to do in any of our ventures, I called and wrote and called and wrote and got nothing. After Annie heard that, she told me to head back to NYC. We went to see Jelly’s Last Jam again. Once again, I cried at the ending, thinking that Gregory’s performance would never be matched. At the end, Annie said, “Let’s go to his dressing room,” and she had her jaw set. When he saw us, he was very warm and started his loving “hello”s and while he was holding Annie’s hand and saying how he forgot to get in touch, how sorry he was, Annie just looked at him with no smile on her face. Gregory could obviously feel the tide shifting. He dropped to his knees and started begging her to forgive him as he was laughing and saying he promised he’d commit to a date and he’d get in touch with me right away. He became a bit less comical but was still trying to remain charming with his “Oh don’t be mad at me” routine. However, then Annie finally spoke and said, “You don’t think I got this far in my career because I’m pretty, do you?” I am here to tell you that he got up, was serious, apologized, said I’ll call this week, I promise, and Annie walked off with a polite, “You’d better call. Goodbye, Gregory,” while Deb’s waving and smiling and saying, “Bye, Gregory, great show,” with a big smile on my face as I’m trying to keep up with Annie. He did call me that week and had an apple in his mouth the entire time we talked. Gregory came every year to the Project except for the year he filmed his pilot, the year they discovered he had cancer, and the year he passed. He was one of our closest, dearest, most loving friends.

Annie and I spent hours and hours talking about her friends, her adventures with her friends when she was younger, as she was getting famous, and I sat there like a kid feeling like I was the luckiest gal in the world to be hearing these things from this person I couldn’t believe was my friend. I was the luckiest gal. One last thing: I never used the word “gal” until I met Annie, and now I don’t know what I’d do if it was not a part of my vocabulary. Sometimes the smallest things make the largest impressions.