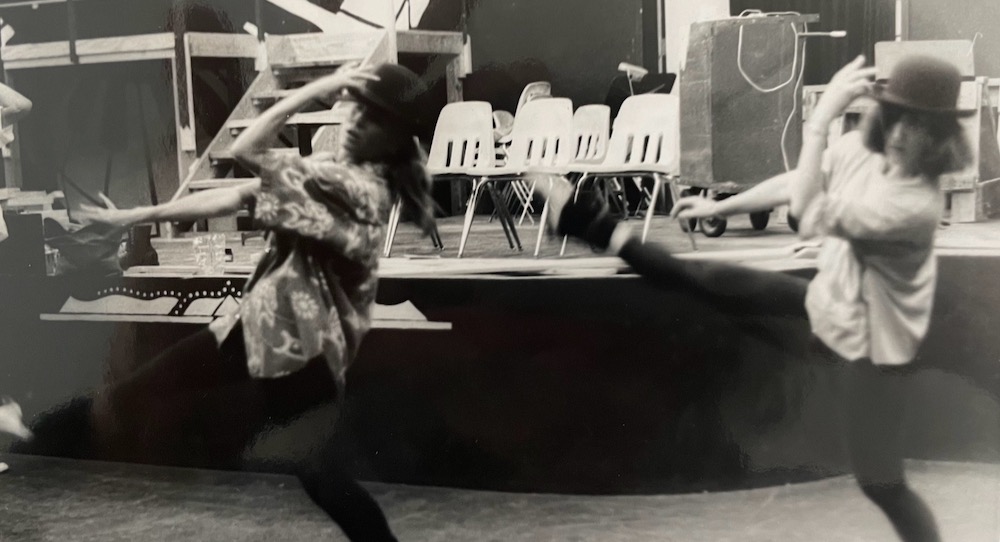 Throughout the early years of Broadway Theatre Project (BTP), the small “resident” faculty, plus Annie Reinking and I and alums who were available, would take our “dog and pony show” on the road in order to raise funds for scholarships. There has always been a firm belief that no one should be denied the opportunity to attend the Project due to monetary difficulties. Therefore, we performed, we had Gregory Hines come down and perform with a reception afterward, and Mr. and Mrs. Steinbrenner and extraordinary daughter Jenny Swindal held a fundraiser like no other with performances by Bernadette Peters, Al Hirt and Ben Vereen. After Annie and I moved on to Broadway, there were several fundraisers with Chicago, Fosse, and with the Arthur Ashe Foundation. Friends in the area made donations when possible. Eventually, during the later years, we had two “angels” who donated goodly sums yearly in order to help young people attend BTP, but, as with many things that happen in the non-profit arts world, that only went on for so long. Then came the time when donations moved away from funding this sort of endeavor, and it has been extremely difficult to “keep on keepin’ on” in today’s competitive world of many musical theater summer programs.

I will always remember Annie’s demand for excellence as she was doing a number from Damn Yankees, and she looked at me and said, “Let’s spike the floor here for the bleachers.” I just looked at her or through her or my eyes crossed or something along those lines as she quickly said, “We do have bleachers, don’t we?” Well, let’s think about this. Of course, we didn’t have bleachers! We were BTP doing a rehearsal in the University of South Florida theater building. We always talk about what we’re doing before a show and the fact that we might need scarves for this number or that, but bleachers was a shocker! However, you’d best believe, we found bleachers! I don’t know where they found them, but they were in place by the next rehearsal. We had no funding for something like bleachers, but when it came to BTP, Annie made certain that the students had what was necessary to complete whatever voyage they were on. On that particular voyage, she deemed those bleachers as being necessary, and she funded them herself. She was a generous and serious educator who cut no corners and did what she had to do to make certain that whatever was being done at the Project was done properly.

Damn Yankees is a Bob Fosse musical of which she was very familiar. In order to do that number properly, she did need the bleachers. I would be remiss if I did not mention BTP’s greatest supporter through the years, Robert Dean Hertenstein, the senior director of entertainment production for Norwegian Cruise Line Holdings. He is a dear friend of mine, a friend of several people associated with BTP and has even on occasion hired those older BTPers who have passed muster. He has taught at the Project, and both Rob and Norwegian have been active supporters of BTP. Without Rob’s involvement with BTP, this Project would not have been able to survive as it has, flourish and add the topic of performing with a cruise line as an alternative to heading for the Broadway stage. What people do not know is before my early years with Annie, Rob and I had been dance partners for a few fundraisers. A year or two later, Rob was in the middle of the group dancing with Annie at a fundraiser for the University of South Florida Dance Department. He goes way back with this Project. Years later, it was through Rob that one of our summers was held on Norwegian property with our final week sailing onboard the Getaway (working!). Our final show was held on the main stage the last night of the cruise. Thank you, Rob!

I would like to say that once we finished with our “dog and pony” era, we moved along and became incredibly sophisticated. No, somehow, we were bitten by the oddest of bugs.

Tampa Preparatory School, our original home, was having some sort of program, and the decision was made to have the faculty perform along with the students. What this involved was Annie and I moving from number to number, especially faculty number to number, in order to make certain that the people who were the academic stars teaching the, hopefully, future academic stars at Tampa Prep could become performing geniuses once the house lights went down, the band started playing and whoever was working lights began doing his thing.

There was one number we worked on, “Don’t Tell Mama”, that we labored over for quite awhile. There was a reason for that. There was a faculty member at that time, I won’t mention his name (although I doubt he would mind), who had decided that this number was for him. Well, as Annie kept working with it, it became obvious that with such little time, this number was not going to be one that would be a barn burner. Thus, Annie kept telling this gentleman to move the piano upstage. “No, more. No, keep going. Not enough. Just a little bit more.” Until they were very much upstage for their number, which with more time, might have gotten better. The fabulous thing about this is that this now illustrious Head of School to this day knew exactly that he was getting the bum’s rush as Annie wanted him to keep moving upstage.

The definite highlight of this show of shows (should have been the title) was when someone, those of you who attended the Project know him very well and those of you who attended Tampa Prep also know him very well, Mr. Joe Fenlon, came out with major Project supporter, then Assistant Headmaster, Peter Shepley to do what else but “Who’s on First?” Before I go on, let me explain that Joe has been the lead Resident Director at BTP for 30 years. He is also the executive director. He is now the Associate Head of Tampa Prep. Back to the fun stuff. Most of you are quite familiar with this sketch, I am certain. If you are not, please watch this Abbott and Costello act of genius first so that you can get an idea as to what Annie and I were dealing with almost clear up until curtain.

Moving along, picture Joe as Bud Abbott, the guy in the suit, and Peter as Lou Costello. Now, there was no evidence at all that Joe ever rehearsed, whereas Peter did nothing but look at the lines on his cards for hours. So when it came time for them to run the piece, Annie and I watched them rehearse over and over and over again as Joe went through the sketch without missing a beat and Peter was a nervous wreck as those quick fire lines were all over the card. Annie and I almost fell out of our chairs laughing as we watched Joe with his eyebrows raised, hands held behind his back, walking away from Peter, throw out his lines quicker and quicker enjoying the train wreck more and more as Peter’s face was wet with sweat and bright red.

That evening, when it came time for their act, Annie reached over and grabbed my arm as they sauntered out and took the floor. Honest to goodness, they flew through that sketch without dropping a line and brought the house down. They not only brought the Tampa Bay Area house down, but an extremely influential guest of Annie’s who had come down from NYC to visit and ended up seeing this magnificent show at Tampa Prep left laughing, and understood why Annie spent a good bit of time here. We did have fun!

By Debra McWaters for Dance Informa.