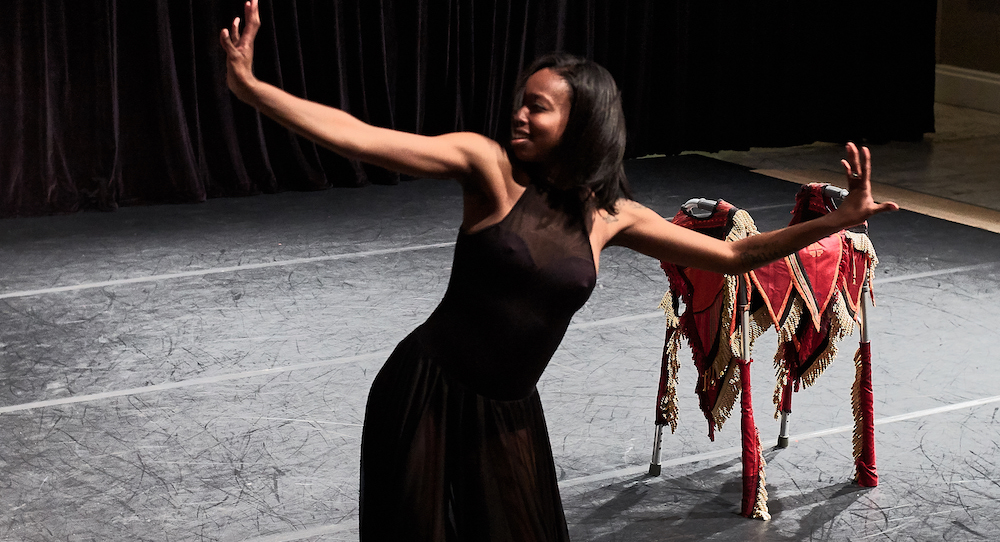 Ellice Patterson started Abilities Dance Boston with a clear mission: to offer a space for dancers of varying physical and mental abilities (including herself) to perform. Patterson, the company’s artistic director, has stayed true to this ethos by involving dancers of low vision, those using wheelchairs and those of size. In this mission lies the truth that dance art doesn’t need “big tricks” to be meaningful and pleasing to experience. The company’s most recent show, Audacity, underscored how dance has so much more to offer than big physical feats.

“Goddesses”, danced by Patterson and Leslie Freeman and opening the show, began with the pair entering from opposite sides of the stage. Patterson, using a walker,  moved slowly and thoughtfully, every inch of movement meaning something. Freeman gestured slowly, her arms moving through the space as if through molasses. Patterson began to lunge with more speed and force, using her walker, while Freeman continued to move slowly. The contrast between their qualities was pleasantly striking.

They walked, exploring the space apart from each other, and then came back together. They reached toward each other and then away. It felt as if a force was pulling them apart but another bringing them back together. Their arms carved the space in repeated motion, becoming meditative. Certain images developed that acted as mirrors — one dancer reflecting the other, doing the same with limbs going in the opposite direction. The stage picture, and the energy with which they moved, drew me right in.

As another kind of contrast, each danced their own solo sections while the other rested in stillness. They rejoined, mirrored images returning, but then together swept right arm up and over. All combined, there were a variety of images and ways of making them present. To end in a moment of caring, they caressed the other’s face with one hand, and their energies seemed suddenly fully at peace. Also present in the piece, particularly with the sweeping classical score and sense of praise, seemed to be an honoring of a power beyond that which human words can describe.

Lauren Sava’s “Alone, Together” similarly commented on deep themes of human existence — connection, aloneness and the tension between the two. Unique gestures and simple yet precise and committed movement delivered these themes. The work opened on two dancers seated back to back, palms connected but spinning fingers, and another dancer circling around them. The circling dancer occasionally looked up and out, with gaze intent. The seated dancers began shifting forward and backward through their spine, alternating arching and folding forward — supporting and spurring the movement of the other.

The standing dancer’s quality then became softer, with arms swinging in circular motion. Circularity and harmony, even with elements of tension and unease, would be a constant hum throughout the work. The two seated dancers rose, and the original circle  expanded. Possibilities for moving dancers in relation to each other in space, which Sava adeptly called upon, here opened up. For instance, two dancers stage right offset one dancer stage left. Later, two dancers moved reaching and standing high while another moved from the floor. It all made a compelling as well as pleasing stage picture.

Also memorable were moments evincing a tension between connection and solitude. The dancers reached toward each other then drew back into themselves — yearning for connection but drawing back inwards when that connection was not fully reached. This was a commonly observed experience inventively illustrated in movement. They found and again left the floor, rising one by one to dance again in unison. Through such shifts, there were several timing structures. Yet I would have loved to see explored more, something in me wanted to see, some faster movement juxtaposing stillness.

To end, they rolled to sit and face the audience, their feet planted. They breathed in and out together and looked all around. I could hear a soft bird song. I thought about how birds are sometimes alone and sometimes in flocks, as well as creatures in nature following their innate impulses. The dancers reached for each other’s hands and found, finally it seemed, a sense of connection. Yet as they gazed out there also seemed to be a sense that they were still alone, together. I remembered Tennessee Williams’s claim that we’re “subject to solitary confinement inside our own skins, forever.”

Louisa Mann’s “An Ending, Beginning” also illustrated connection, disconnection, and the tension between them — all without “virtuosic” physical feats. Janelle Diaz, using a wheelchair, entered with Lauren Sava. Diaz spun in her chair as Sava circled her forearms around each other, bringing a different form of what Diaz was doing. This commonality brought a sense of connection — only growing with Sava getting on the back of Diaz’s wheelchair and their palms touching as Diaz circled it.

Sava dismounted the wheelchair, reached away from Diaz, and fell to the floor. She rose and danced in her own space again, Diaz moving in her wheelchair in hers. For the time being, their connection was no more. They soon enough rejoined, holding hands and spinning. Upon releasing, simple physics had Sava spinning to the ground. The kinetic energy was enticing. I was fully pulled in to this play on independence and connection. It didn’t take “tricks” to engage me in this way.

At the same time, that disconnection potentially coming at any time brought a sense of melancholy. The heavy, emotionally rich piano score contributed to that feeling.

Further adding to the drama, I could see this emotional investment in the dancers. For instance, at one point Sava swept one arm down, up, and back toward Diaz, with that evocative feeling of reaching past where she’s reaching to. She was seeing and feeling beyond that point in space, energetically.

To end, Sava sat on one side of Diaz’s wheelchair. They rode off together, ending in connection. I could feel my skin prickle with goosebumps at this simple, yet powerful way of conveying something so fundamental to human well-being — unity with other humans. I didn’t need big leaps, endless turns, or kicks-up-to-ears to get there. It only took true commitment from the dancers, inventive choreography, and meaningful themes.