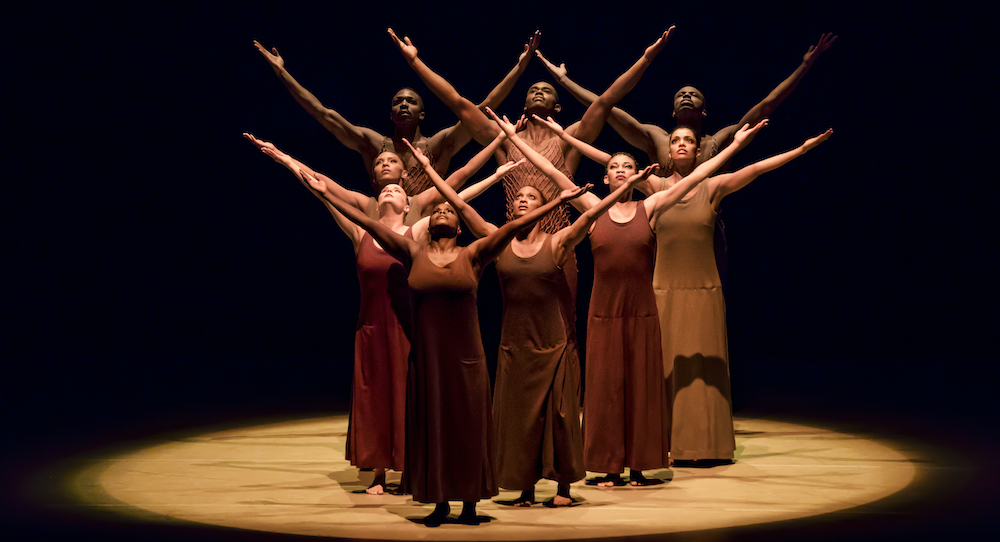 Alvin Ailey American Dance Theater, known for uplifting and uniting audiences across the globe with messages of hope, will offer a free virtual season from December 2-31, celebrating six decades of Revelations.

The virtual season kicks off with “Revelations Reimagined” Opening Night Virtual Benefit on December 2, at 7:30pm ET, celebrating the global impact of the soul-stirring American masterpiece that is needed more than ever during these trying times. Springing from Ailey’s childhood memories of growing up in the south during the depression and attending services at Mount Olive Baptist Church in Texas, Revelations pays homage to the rich cultural heritage of the African-American on a journey from struggle to surrender to salvation that ultimately speaks to our common humanity and the power of faith and hope. This free event will be live streamed on various digital platforms and will include a spectacular virtual performance featuring Alvin Ailey American Dance Theater and other special guests, followed by a post-benefit dance party.

Weaving together deep personal experiences, reflections from current dancers and an original score by composer Damien Sneed, Matthew Rushing, in his first season as Associate Artistic Director, will join with Company member and Assistant to the Rehearsal Director Clifton Brown and former Company member Yusha-Marie Sorzano to present Testament, a contemporary response to Alvin Ailey’s masterpiece that illuminates the enduring impact of the beloved classic 60 years after its creation.

Acclaimed Ailey dancer and Resident Choreographer Jamar Roberts will be contributing to the centennial (dubbed Bird100) of Charlie “Bird” Parker with A Jam Session For Troubling Times, a premiere inspired by and featuring the music of the revolutionary saxophonist and composer. Alvin Ailey is famous for having said that “dance came from the people, and it should always be delivered back to the people.” In this upbeat, quirky and accessible work, Roberts holds fast to that mission. At a time in our world rife with chaos and uncertainty, A Jam Session For Troubling Timesuses the energy, nuance and virtuosity of the “bebop” sound as a vehicle to lift our spirits and demonstrate that we are stronger than our circumstances. Jazz has provided the soundtrack to Roberts’ other works for the Company, including Members Don’t Get Weary (2017) and Ode, last year’s powerful meditation on the beauty and delicacy of life in a time of growing gun violence.

An Ailey and Ellington program will showcase some of the 14 ballets Ailey created during his career that celebrate the musical genius of the eminent American composer Duke Ellington that have become cherished Ailey standards, such as Night Creature, Reflections in D and Pas de Duke. Ailey’s artistry will be reaching new heights in a breathtaking excerpt of Pas de Duke, originally created for Judith Jamison and Mikhail Baryshnikov, filmed at the newly transformed Woolworth Tower Residences on top of the iconic national and New York City landmark Woolworth building with the New York skyline as a backdrop. A visually striking backdrop for the celebration of America’s two great art forms – modern dance and jazz music – The Woolworth Building is an architectural gem that was officially inaugurated on April 24, 1913, when President Woodrow Wilson flipped a switch in the White House to illuminate what was then the world’s tallest building.

A variety of other online special programs that will span the month of December will be announced later.

For further updates on the virtual season and schedule, visit Ailey All Access and www.alvinailey.org.