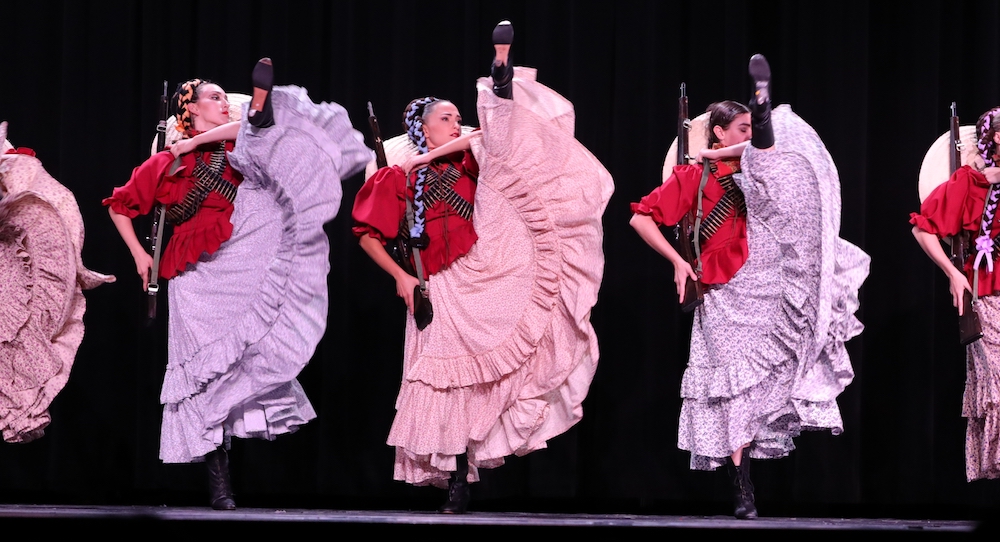 Ballet Nepantla Artistic Director Andrea Guajardo describes Valentina as telling “the untold history of the Adelitas, the women who took up arms and fought alongside the men in the Mexican Revolution. We tell Mexican folk tales like Jauan Gallo and La Chamuscada, and we bring them to life through contemporary ballet. This is something that has never been done before.”

Ballet Nepantla tells stories about Mexican and Mexican-American history and society using contemporary ballet, West-African dance and Mexican folklórico. Fusing these styles seamlessly, Ballet Nepantla knows how to live in the in-between spaces not only of dance styles but also of different times and cultures.

The company’s ability to do this is no better explained than by the introductory solo to the show, simply titled Nepantla. Part mission statement and part foreword, the solo is set to a reading of the poem, To Live in The Borderlands Means You, by Gloria Anzaldua. Dancer Piper Dye moves to the words both intentionally and emotionally, contextualizing the poem for those who haven’t experienced its subject. To Live in The Borderlands talks of being “a half-breed caught in the crossfire” and speaking “Tex-Mex with a Brooklyn accent,” not knowing which parts of your identity to identify with, while each of them shun you for associating with the others. Ballet Nepantla’s beautiful ability to live in the in-between comes from having to live in those spaces constantly, and sometimes harshly.

With Nepantla providing a lens through which to watch, Valentina begins. A montage of moments from the Mexican Revolution, Valentina takes us from the oncoming of war to its aftermath, telling a culturally specific story in emotions anyone can understand. Men leaving to join the fight, widows mourning their husbands, children missing their fathers. But throughout, the character of the Mexican women is clear. From bearing the brunt of the emotional toll to taking up their late husbands’ guns and leading the charge, the resilience in their response is the story’s through line. The dancers hold their guns with conviction, and adopt the same strength in their movement as the men had before. These women set the tone for their communities, as well as their own children. After a particularly heart-pinching pas de deux between late-father and grieving daughter, dancer Dan Westfield exits the stage, taking his daughter’s doll with him, and she (danced by Dye) deals with the loss of that innocence by taking on the same strength and style of dancing as the other women.

Soloist Ayaka Taniguchi stands out as a star performer in this show. The only dancer en pointe, she matches and expands the strength of the other dancers, while adding her own classically trained grace. In both her solos, one of which is set to the titular song Valentina, Taniguchi implements the precision of her technique as a means for her artistry, using it to underline the passion in the story rather than undermine or distract from it. Her musicality does more than meet the stirring tones of the traditional Mexican music; it enhances its potency.

With intricate choreography and partnering, the detail, technique, and virtuosity of the dancers and the work itself is astonishing. But on top of that, the stomps of heeled shoes to the floor, the dancers egging each other on in Spanish, the whoops and hollers, (the lasso solo!) all stir up an energy onstage that expands into the audience. After an unfortunate coronavirus-induced limit on theater capacity, the standing ovation that night could have be mistaken for that of a sold out house. The resiliency that Valentina is about clearly runs strong in Ballet Nepantla as well.

Guajardo says of her company, “Some people attend Ballet Nepantla performances because they hear we are a contemporary dance company and they are then introduced to Mexican folklorico for the first time ever… At the same time, we have Hispanic communities who come to see the folklorico — they see a pointe dancer for the first time ever and end up falling in love with contemporary dance. What we are doing is bringing together extremely diverse audiences and exposing them all to something new and beautiful. And on our end, it’s so beautiful to see such diversity all coming together to celebrate the Mexican culture.”

Beyond being tender, truthful, educational, and a host of other superlatives, Valentina is exciting. It’s fun in a way that few performances are. Without forcing a plotted storyline, it leaves tangible impressions of Mexican history, and the pulse of a culture in time.