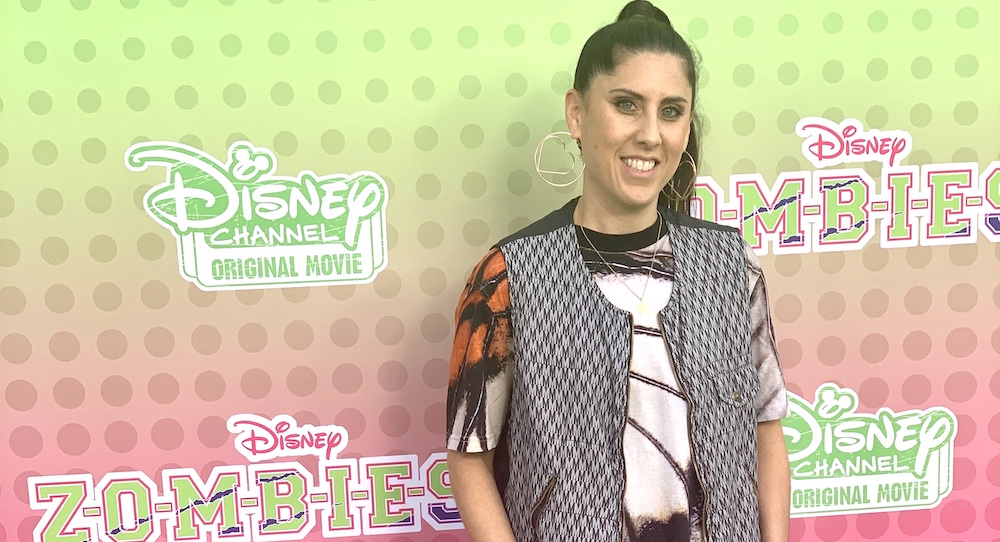 Jennifer Weber is the Carmen Sandiego of the dance industry. Where in the world is Jennifer Weber? Our answer…Where is she not?! Weber’s choreography can be seen in commercials, on the concert dance stage, in university dance crews, on the West End and (soon) on the big screen in Disney Channel’s Zombies 2. Her work is fresh, fun and fueled by her passion for hip hop movement, knack for story-telling, and positive, collaborative energy. She’s a refreshing reminder that being a good person is the key to being successful in this career. Talent is wonderful and common. Your character is what will set you apart from the crowd and make you the artist, like Weber, that everyone is dying to work with.

Dance Informa had the opportunity to interview Weber just weeks before the premiere of her film debut. Take a read!

Where are you from, and how did you begin dancing?

“I grew up in Amherst, Massachusetts, and when I was really little, I started doing choreography on my younger brother. When I was older, I started taking dance classes, but I wasn’t serious about it. I really got into dance much later when I was in college at the University of Pennsylvania. I started a dance crew there which still exists today (Strictly Funk). When I started going out to night clubs, that’s when I really got sucked into dance. I had always been a very shy kid, but when I found dance, I felt that was a language I could speak. I loved being in a world where dance was all about freedom as opposed to being in a class where you’re being told what to do. I found that to be so empowering.”

How can you take the sense of freedom and organic conversation that you might find in the club or dancing with your friends into choreography which needs to be somewhat structured?

“It depends on the project. I like to mix directed freestyle – having sections where, if there’s a character who needs to communicate a certain narrative in just 45 seconds, the dancer can be in the moment as much as he wants (responding to the music, responding to the audience) as long as he hits the key dramatic beats. And then I fuse that with moments that are fully choreographed. For example, in The Hip Hop Nutcracker, there’s a lot of this where the dancers are free to express while they hit the narrative and emotional beats. However, when you’re making a movie, you can’t do that. Take after take, the choreography has to be exactly the same for continuity purposes. For that, I love to work with the dancers and pull from everybody’s vocabulary to really come up with the same vibe – but one that is 100 percent repeatable.”

What inspired you to create The Hip Hop Nutcracker?

“I was really interested about why — in dance — people don’t reimagine the classic ballets in the way that, in theater, there are one hundred renditions of Romeo and Juliet. I was interested in storytelling and creating character/narrative through hip hop movement. I also wanted to expand hip hop beyond the predictable rhythm of hip hop music, coming from the question, ‘How do you make hip hop vulnerable?’ Hip hop tends to be so strong, grounded and aggressive. How do you show the flip side? One of the things I found was to take away the traditional hip hop beat and use classical music. The rhythms are always shifting, and you can’t feel the downbeat the way you can in a loop. There was an element of surprise and also an element of vulnerability that I found to be beautiful. So, I was doing all these experiments and actually had created a version with Vivaldi’s Four Seasons. When I met with Mike Fitelson, the executive director of New York’s United Palace for Cultural Arts, he suggested using The Nutcracker. The rest is history.”

Talk to us about & Juliet, your show on the West End. It must have been so much fun to choreograph to this iconic score. How did you infuse your own voice into the movement?

“The story is framed by Shakespeare and his wife arguing over how to write the ending of Romeo and Juliet where she’s challenging him to write a better story for the female character — to give her a new beginning. Why would she kill herself after dating this guy for only three days? & Juliet is a musical comedy with the amazing pop music by Max Martin. It’s every great guilty-pleasure song you’ve ever wanted to dance to (Britney Spears, Arianna Grande, Katy Perry, The Weekend, Justin Timberlake). Martin was a huge collaborator throughout the project, which was really cool. The movement is all driven by the story and what’s happening for the characters. Also, a lot of the songs are reimagined (for example, ‘Hit Me Baby One More Time’ is now a power ballad) while others are similar to the versions we are familiar with (‘Since U Been Gone’ is a big dance number!). The show is really special and empowering. It’s a huge dance production, a musical and a pop concert all rolled into one. I’m so grateful to have been able to work with such an incredible team on this show.”

“I wish I could tell you the answer to that. What I will say is that you can expect to see more from & Juliet in the future.”

Disney Channel’s Zombies was such a fun movie! What’s it like jumping in to choreograph the sequel — your film debut?

“When I found out I was going to be working on Zombies 2, I watched the first film and loved everything about it — the storytelling, the message, the production numbers, everything! When I was talking to the director, Paul Hoen, we had a really great conversation about how to create character and tell story through movement. There are the cheerleaders and the zombies and then, in the sequel, the addition of werewolves. It was cool to figure out how the werewolves move compared to the other groups and how their choreography evolves throughout the film. I approached this project the same way I approach theatre, asking, ‘What are the key elements of the characters and the story, and how do we create the movement that makes the characters identifiable and tell their story? We had a skeleton crew in pre-production and then we had big rehearsals (there are eight production numbers and over 60 dancers).”

Your choreography resume spans TV, film, commercial, musical theater, touring productions and more. Do you have a favorite? Or, what merits and challenges do each pose?

“In theater, the choreography has to be sustainable eight times a week (and while singing). And you have to think about covers. How you translate the movement vocabulary of one dancer to another is very unique in the kind of work that I create. But at the same time, there is nothing like the magic of live theater. In film, you can create really crazy things that can be captured in a single day of shooting. Also, the reach of the audience is so great. Disney released the first little music video from Zombies 2, and it already has 5.5 million views after just a couple of weeks. I can’t imagine how many years & Juliet would have to run for to reach that kind of an audience. For me, what I love is working with amazing people and telling amazing stories — whatever medium that’s in. It’s about being inspired and creating something that everyone feels passionate about.”

You advise younger dancers that it’s important to be a businessperson in this industry in order to be an empowered artist. Can you speak more about this?

“To be successful as a dancer today, you have to be someone people like to work with — and that goes beyond talent. You have to respond to emails, you have to show up on time, you have to always be ready to work, and you have to bring a positive attitude every day. All those things are so important to choreographers. As a choreographer, I need to trust the people I work with. They sound like business skills but they’re really life skills — just being a good person, doing your job well and coming in with good energy builds that trust. There’s nothing that feels better than getting an amazing job and being able to call up people you know to be a part of it. That is the best feeling in the world!”

Be sure to tune in to watch the premiere of Zombies 2 on The Disney Channel Friday, February 14, at 8pm.